Making the most of the Meade 7" MAK 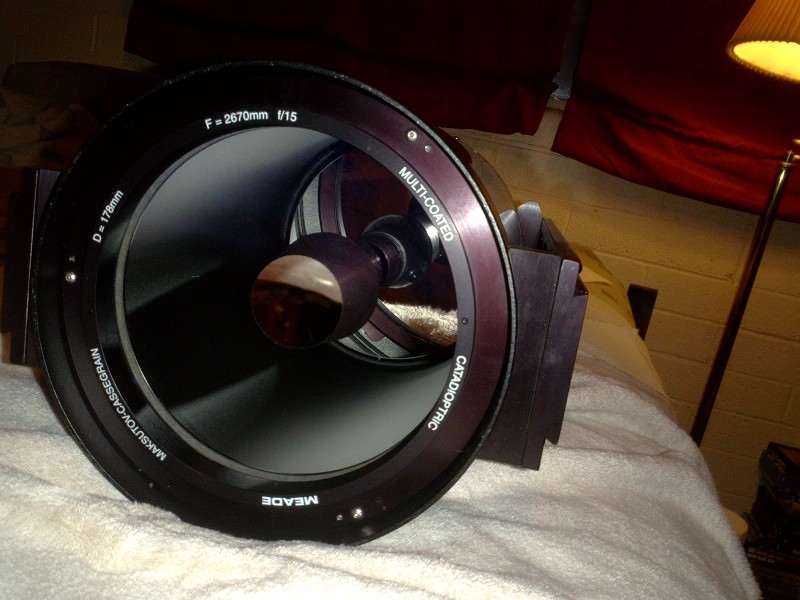 Background:
I have enjoyed astronomy for decades and seem to focus as much on equipment as the sky itself. Telescopes take on a life of their own, and we start treating them as such. Like most people I hope to get the most “bang for my buck” when looking at expense compared with capability.

Recently I wrote an article on removing the internal counter weight from the Meade 7” Maksutov. In the ensuing message traffic several of us discussed some modifications we might make to the OTA to optimize its ease of use and functionality.

I write about the OTA only, because mine happens to be mounted on a German Equatorial and prefer it to the fork mount on a wedge. Many people either like the wedge or just haven’t made the plunge for a GE mount. There is no perfect answer to every observer’s concerns. Being happy with the mount, my concerns with the OTA were first to eliminate or reduce the affects of anything commonly recognized as a negative property of the scope. My second priority was to improve upon it or enhance its use.

Back to the OTA:
We start with the negative aspects. These have been referred to in many reviews and are the commonly accepted drawbacks or the “Nots” as opposed to “Hots”. They are:
• Image shift
• Long cool down time
• Fan vibration
• Heavy OTA weight
• Awkward balance on a GE mount

Some complaints are common that I don’t see as a fault in the scope. They are:
• Not enough aperture
• Focal length too long

These have more to do with instrument selection than its function, and can be solved by buying a different telescope. Is there a telescope that can deliver images like the Hubble gets from its position in orbit? Yes, and most of us are part owners already. NASA’s web site has fantastic photos and I encourage you to have a look.

Back to the problems with the Meade 7” MAK

Long cool down time can be reduced but not eliminated. The first big step is removing the internal counterweight. This reduced the internal mass and opened up the airflow significantly. The mass of the meniscus is a bit less than that of the primary mirror. It is directly exposed to the outside air, so it sheds some heat. The main mirror is more isolated inside the tube. So getting air into the tube would help. Meade built a fan and vent at the back of the OTA. It moves air into the tube and the vent on the right lets it out. There are after market fans with a wand that fits deep into the open visual back of SCT scopes. These are removed before viewing. Why not build in an improvement that doesn’t have to be removed, and doesn’t go poking around inside your scope?

The filters must remain in place to remain effective at keeping dust and hair out of the OTA. A second fan mounted to draw air out of the OTA while the original pushes air in would increase the air flow. It may not double it, but it will go up. Short of drilling lots of new holes in a variety of locations, this is about as good as it gets for improving the cooling. With two fans running, the OTA should cool down faster than a classic 8” SCT. Be sure to let it cool down without the main dust cap on the front of the scope.

Fan vibration is related to the cooling problem. I tried running it at 12 volts, but the reduced RPM made no difference. It just decreased the frequency of the vibration. Keep in mind it’s not all that much. Having an extra fan will increase the vibration slightly, but in this case procedure combined with physical change will have the desired result. Set up early, run the fans until observation time and turn them off. They should move enough air to get cool down times short enough to shut them down and observe. If you take a break or stop to change EPs turn it on for a few minutes. The air inside the tube should stabilize within minutes.

Heavy OTA Weight is reduced by the removal of the internal counterweight. If you’re scope is on the fork mount, don’t remove the counterweight or you’ll have a hard time adjusting the declination. This change is the most difficult and the reason I shared the procedure. If you’ve read it you couldn’t miss all the “Turn Back Now” warnings. It’s mechanically easy, but on a fine instrument, it’s possible to do serious damage. It does help solve several problems.

Awkward Balance for use on a German Equatorial Mount may be very minor problem, but in my case correcting it helped make balancing the scope easier. This will reduce the swing moment slightly and help keep the OTA stable in its mount. It also brings the EP down a little for those of small stature. Again the removal of the internal counterweight is the key.

Image shift is found on many telescopes, and Meade’s are no exception. It’s a function of moving the primary mirror to achieve focus; usually in a Schmidt Cassegrain, but many Maksutov Cassegrain scopes suffer from this problem. The Questar solution is machining the mirror mount and baffle tube to more exact tolerances, and to preload the mirror assembly with a spring. The tolerance between the two parts is close on the Meade but dependent on the thick grease used as a lubricant. It’s important to understand how this works.

On the two OTAs I own, both have very little image shift. It is unlikely Meade changed their specifications for that machining process, so I’ll assume (yes I know) that means the grease is the key. One of my scopes is a newer model with a mirror locking brake and the other is an older LX50 which does not. On the outside the lock is a simple knob like the focusing knob, but just above it. On the inside it’s a small gear that turns a very large gear. That compresses a collet around the baffle tube shaft, like a chuck holds a drill bit, but not quite as tight. Leaving a small amount of friction on the lock helps reduce the image shift while focusing, and setting it tight locks the mirror in place. The process of setting it does move the focus a little so it takes practice.

The lock is at the rear-most part of the primary mirror assembly. The focusing post is just ahead of it but still very low on the assembly. The other end is about three inches up the baffle tube’s exterior and if there is not enough grease on the tube, it can move side to side. This is the culprit, and the reason a better focusing knob doesn’t completely solve the problem. A thick layer of grease is the cure. Put a dab on the focusing draw screw too. It has a hole in the end that fits over the mirror’s positioning post. If there’s a lot of slop in that junction, you’ll see it when focusing.

The easy fix is to run the mirror right back to the rear by turning the focusing knob clockwise. Then run it right to the front of its travel by turning counterclockwise. That carries built up grease from the rarely used parts of the baffle tube to the middle and spreads it out. If there simply isn’t enough grease, the best time to add more is if you have decided to remove the weight, but it can be done with the weight left in. Meade used red petroleum grease. It won’t take much. I used a dab about the size of a dime on my fingertip to lube the whole thing. The idea is to get it spread evenly on the shaft. There are other lubricants available. One is mentioned below.

If you invent a spring mount to preload the mirror assembly, you may still have some movement at the front of the mirror carrier. Taking the slop out of the system at that end is the reason for the grease to be thick. Silicon based grease as used in oxygen valves emits a slight vinegar smell. That’s a mild gaseous acid, and might affect the coatings on your optics. My experience with silicon is limited to a seaswater environment and it looses some self cohesion falling off in little globs. Not so good. Starizona uses “Glube”; a blue synthetic grease that is not petroleum based. It is quite expensive, but will not emit gas inside the tube like oil based products. The red grease works but does collect dust over time. I have not tried the blue, but will write about it if and when I do.

Conclusions:
The removal of the counterweight in a German Equatorial mounted OTA will do the most for the bigger problems. If you still have a fork mounted scope, adding a fan to draw air out and greasing the baffle tube will help. Here’s how it breaks down:
• Long cool down time – made comparable to other scopes by removing the weight and adding a fan
• Fan vibration – reduced by method of use
• Heavy OTA weight – reduced by removal of the counterweight
• Awkward balance on a GE mount – improved to compare with other scopes— again counterweight removal
• Image shift – reduced through proper lubrication and by practice

Overall I’d say the big problems are either eliminated or reduced to levels below what I can notice. These were certainly an improvement over the usual 8” SCT’s.

Odds & Ends outside the OTA:
I added a Feathertouch focuser from Starlight instruments. It improved the ability to get a finer focus. A Crayford on the visual back may do even more. I had Meade’s power focuser and rarely used it, so I sold it. Some Crayfords have the ability to rotate. That’s a good thing on a GE mount if you can adjust the tension.

The next goodie I added was a Virtual View visual back from Starizona. It’s a 2” back that rotates on a clutch, and is very precise. I left it on the scope and use it to rotate my Eyepiece to a comfortable viewing position. It really improved the utility of the scope. It added about a pound of weight, but was worth it.

I bought a TeleVue 2” dielectric star diagonal. Others will work, but this was pretty good. If you have good optics inside the scope, remember there are glass surfaces the light still has to encounter on the way to your eye. Having a really top notch diagonal will help. Williams, Meade and others also make dielectrics and I’m sure they’re very good.

The 2” eyepiece format is my favorite. I’ve tried heaps of EPs and have settled on two that I use the most. They are the 27mm Panoptic from TeleVue and a type IV 12mm Nagler. The Nagler also fits the 1.25” barrel size by the way. In the 1.25” size I have a TeleVue 8mm Radian and for once in a while dead calm nights a 6mm Orthoscopic from Baader.

I cobbled together a nice focal reducer for large deep sky objects. It’s a x.50 Anteres reducer mounted in a 2” barrel like a Barlow. It takes advantage of the great backfocus on the Meade and can give a whopping 1.5* TFOV when used with the 27mm Panoptic. That’s right, and that is another story!