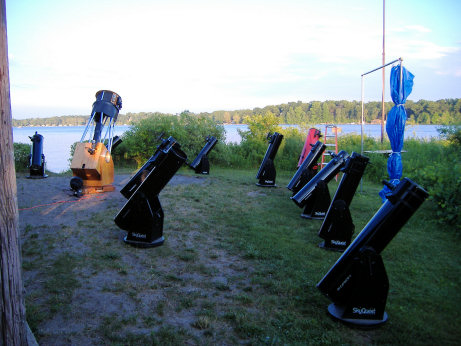 In October of '05 I responded to an ad in S&T for a resident astronomer at a camp in Michigan near Three Rivers for the summer of ‘06. I sent a fax expressing my interest the next day and after a few months of discussing the details with Lou Sandock it was decided that I would take on the job.

My experience at Camp Eberhart this summer of ’06 was amazing. I lived in a room in a cabin by myself called Buckets of Blood which was conveniently located only about 75 yards from the astrocenter and only 50 yards from the beach. My role there as a resident astronomer was a first for the camp and would evolve over the first few weeks of the summer. Going in I had only a loose understanding of just how I would contribute. One of the unique things about this camp is that there were 2 weeks of the nine during the summer in which an astrocamp was offered. Max Lopez, who headed the astro-program, would be someone I would work closely with during the non-astrocamp weeks. I also knew that my main contribution would take place after dark each night in the back of a building called Dave’s House, which has the perfect location for observing purposes with nightly viewing sessions. This was in fact my main purpose as nightly viewing had not been a part of the camp’s programs for several years. 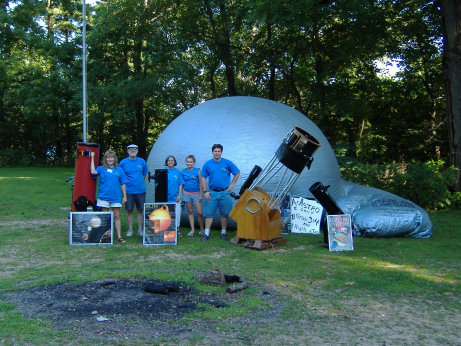 Although it was not a requirement to bring my own telescope or astro equipment, I did bring along most of my astronomy gear. The main item was a fully equipped 18-inch dobsonian telescope with a tracking platform and of course my 24-pound eyepiece box. . The Astrocenter, located in one of the rooms at Dave’s House, had about 10 Orion 8-inch dobs and one 10-inch along with a myriad of other astro related items, including a computer lab and a 70mm Coronado solar scope. Also on the camp ground about a quarter mile away was the Yarger Observatory, which houses a 12.5-inch Dynamax 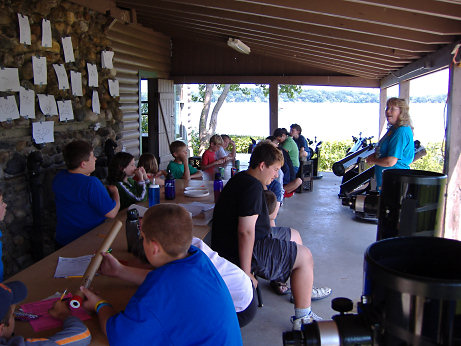 During the first several nights there I had a chance to use my telescope at Dave’s point, a peninsula with water in all directions but north and acclimate to my new surroundings. I was quite pleased with the darkness of the skies offered by the site. The sky was largely open in all directions except the northeast where there was a tree. The site was also free of immediate light pollution.

During the first week of camp, I became familiar with the procedures of the camp and how things were done there. I spent most of the daytime with the campers at the astro-hut, which is located on the island where the Yarger Observatory is located and helped Max with various activities in the astro-program. At night, campers who wanted to view through the many telescopes came out to the peninsula and I headed up all activities.

Most clear nights usually began by observing Jupiter or the moon. On several occasions, the Great Red Spot was easily seen on Jupiter and the moon showed many thousands of craters and other geologic features. Sometimes when the atmosphere allowed unusually steady and clear views, I used my binoviewer and views seemed 3-D. 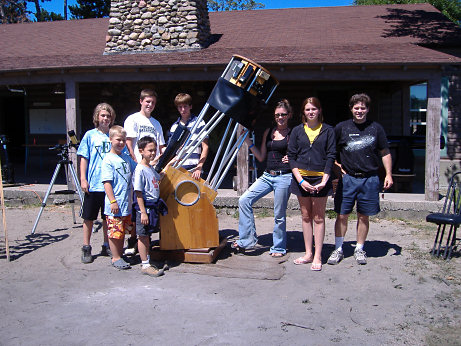 As darkness approached I then typically pointed the scope at the many summer celestial gems that so many know well. Some examples include M13, the mighty globular cluster containing 500,000 stars, the Ring Nebula, a star that ejected it’s atmosphere and looks like a cloudy donut, the wild duck cluster, M11, an open cluster that contains hundreds of compact stars amongst a rich backdrop of milky way stars to name just a few. I also tried to include Milky Way sweeps with the 31mm Nagler in place. To do this, I simply looked through the 4.7 inch at the mirror end while the observer was looking through the main scope and swept through various parts of the Milky Way while often “accidentally” passing through objects such as Alberio and M11. Reactions to many of these views offered where priceless. The “ohhs” and “ahhs” where commonplace. Virtually none of the campers had ever seen views even approaching those offered each night and were in a different league than those offered in the 8-inch scopes.

During the many viewing sessions offered, I always made it a point to not only explain what the object was but to tell the object’s known distance in light years or in the case of galaxies the distance in millions of light years. It was important to me to always make sure the campers had a good understanding of what they were actually seeing. The most distant objects I showed was a group of galaxies known as Stephan’s Quintet, a cluster of 5 galaxies 4 of which are nearly 300 million light years away and a foreground member that is “only” 65 million light years distant.

During the cloudy nights, campers still came out for discussions of many fascinating astro-related topics. Topics such as the nature of black holes, the beginning and end of the universe, and the possibility of extra terrestrial life, were commonly discussed. I was often complemented on how fascinating and enjoyable the discussions were. 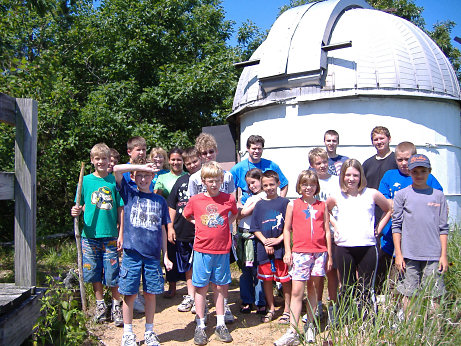 During the astrocamp weeks, which were weeks 2 and 6, I had the pleasure of working closely with several excellent astronomy educators. My part was somewhat different during the days as I worked exclusively with the astrocampers during the afternoons and all interested campers at night. Nighttime activities included working with the kids as they earned their telescope and stargazing achievement awards. We also utilized a pop up planetarium during the daytime to familiarize the kids with the major constellations. The 2 astrocamp weeks were a great success.

As the weeks progressed, my position and place in the whole camp scene evolved. It soon became a requirement for campers interested in stargazing to sign up after dinner for each night’s viewing session as the numbers of those interested increased in the later weeks. At times there were as many as 30 campers coming out and it became a bit of a challenge to accommodate all those who wanted to observe. There were some memorable nights such as when we all watched for the first sign of moonrise over Corey Lake, the times we saw iridium flares, and meteor watching during the Persied meteor shower.

My summer at Camp Eberhart was quite simply an amazing experience. I was very happy to play a key role in impacting young lives and being able to show the universe the way it’s supposed to be seen. I sincerely hope the position can continue and grow as the campers can benefit tremendously from the experiences gained. I suspect that few if any other summer camps offer such a program. I look forward to having the chance to do it again next summer.
Darren Drake
Here are more pics and info on astrocamp at Camp Eberhart
http://analyzer.depaul.edu/paperplate/astrocamp06.htm
Comments (0)