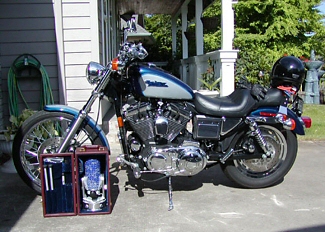 [ARTICLEIMGR="1"]I own a 1999 Harley Davidson 1200 custom Sportster. I choose this bike because I am close to 54 years old with a progressive degenerative bone disease. I had always wanted a Harley and decided before it was to late to get one despite my doctor’s vehement opposition. I have always liked the Sportster model because of its clean simple lines and its quickness. Yes I know that the Japanese bikes are more powerful and have every amenity and that I could have bought one for half the price of a Harley. I have no intention of entering into a debate about this. Those of you who own a Harley already know why. Besides you do not have to be a NASA engineer to work on a Harley. I think the comparison that has been made of a Zippo lighter and a Bic lighter as compared to Japanese bikes and a Harley is very illustrative. A Bic will light thousands of times with little maintenance and when you are done with it you throw it away and get another. A Zippo lighter you have to keep refilling and replacing parts but you can keep it for a lifetime. To each his own.

Being consistent with a minimalist approach and enjoying quality my travel scope is a 3.5 standard Questar with zedour mirror and BB coatings. I have all 5 of the Brandon eyepieces that give me 15 different power ranges thanks to the internal Barlow and built in finder scope set-up. The scope which has the 9 volt power drive along with all eyepieces, filters including a sun filter along with the mount are all enclosed in a small case which you can see in the photo. I just strap it to the sissy bar on the back of the bike.

On May4, 2004 I decided to blow the dust off the bike after a winter's storage and take a little overnight trip to do some lunar viewing. I had recently came across a series of photo's showing the various locations on the moon where the Apollo missions had landed. I thought it would be fun to see just how close I could get with my little Questar. The moon was full and the weather looking good. I live in Eugene, Oregon where we are literally only a few hours or less from the Pacific Ocean, Deserts, or Rain Forest and Mountains. For my destination I choose a place locally called Eagles Rest which is just a little over an hour from where I live. Part of the ride is up a mountain on a singles lane paved road, which is very curvy. Just the kind of ride I like on my nimble little Sportster. As I was putting up the mountain the scotch broom was starting to bloom (very bright yellow flowering shrub) and was beautiful. This is all forest service land and there are no habitations in this area. The sights and smells of the evergreen Douglas Fir and various plant life was just wonderful after a winters worth on rain and indoor activity. Also there is something about those big old twin cylinders throbbing away creating the well known Harley Melody (Screaming Eagle pipes). Harley may not be the fastest but they are one mighty powerful torque machine. As I well know because after making a sudden stop for a deer crossing my path I had forgotten to gear down so I proceeded to take off again in 3rd gear. No problem for this machine as it just chugged along up to speed.

When I arrived at the clearing on top of the mountain, which is about 3000 feet above sea level, I pulled of my backpack and set up my little woman tent and assorted gear. There is a fairly decent flat rock where I set up my scope using the Questar 3 legs for Polar alignment. Once this was done I made a small fire, cooked some coffee and waited for darkness.

Since the moon was blinding I put on a moon filter and proceeded with my tour. First stop was the southern edge of the Sea of Tranquility, which is where Apollo 11 landed. I guess this site was chosen for safety due to its smoothness. Seeing conditions were close to 5. Only problem was, due to full moon, there was difficulty with good contrast as there were few shadows. Using an 8x Brandon and the built in Questar Barlow I was able to achieve 244x and this little scope handles it with aplomb. My next stop was to the crater Copernicus where Apollo 12 landed about 300km northeast of it. I believe that I was actually able to see one of the larger craters that was located below and to the left of the landing sight but I am not certain. My next location was some hills at the northern edge of a crater called Fra Mauro. I looked at the Imbrium Basin, which according to the material I have one of the goals for the astronauts was to try and collect material that had been ejected from that basin 3.85 billion years ago. As to what I saw of the actual landing sight I believe I was able to see some of the mountainous area, which is to the right of the actual landing location. The next location I went to was that of Apollo 16 which were the plains near the Crater Descartes. I guess just to the south of the landing sight is the South Ray crater which the Astronauts took samples from. I am not sure if I was visually able to see either one of these craters but I am sure that I could see the mountainous areas that are north and south of the landing area. It was at this point that I discovered that some how I had misplaced my notes and photo's of the Apollo 15 landing sight. Disappointed I moved on to the Apollo 17 location. This actually turned out to be one of the easier locations to find. You go to the southeast edge of Mare Serenitati. There you will find the Taurus-Littrow Valley. I was able to the southeast edge of Mare Serenitatis and was able to see a cluster of mountains that looked sort of like volcanic cones. It is in the valley between these where I believe Apollo 17 landed. By now (5am) the moon was low in the sky and there was sky glow in the east so I called it good for the night.

After a few hours of sack time, well maybe more than just a few, I broke my little camp up which took all of maybe 15 minutes, started up my scooter and had a very pleasant ride down the mountain and was back home by noon. This little trip will remain in my memory as a high light in my life as I know that this type of activity soon will not be any longer possible for me. I have a nice truck and camper, which I use regularly, but there is nothing, at least for me, that equals the sense of freedom and exhilaration that I get exploring the heavens with my Harley and little Questar.