The 20mm Erfle, a real gem. This post reflects my opinions and experiences, not the "facts".

I recently purchased a Celestron 20mm Erfle and a University 20mmm. I wanted to share some comments on each. Old news to some of you, so please bear with me. The purchase was to satisfy my curiosity about 80's eyepieces and Erfles. In "The Light-Hearted Astronomer" by Ken Fulton*, a 20mm Erfle is mentioned 3 times, in the context of "reccomended", "sharp", and "best".

'Celestron 20mm ERFLE 1 1/4 Fully Coated Japan'(Circle V)** This is a very nice ep. Volcano top, with ribbed grip ring. Has light purple coating. I believe the 20mm Erfle was sold under a variety of brand names in the 1980's, at an affordable price.

'University Super Er. 20mm M.C. Japan' (Circle T)***
Similar to the Celestron, but of recent manufacture. Smooth sided, no grip ring, and deep green and violet coating, a very pretty coating. Very close to parfocal with the Celestron. The only 1.25" Erfle I know of sold today as an "Erfle." Very nice lettering on the barrel.

My opinion: Both are very fine performers in f/15 and f/5 scopes. Wide field (60 deg?), sharp bright image, no ghost image. Some minor edge distortion in f/5, but not offensively so. Does not detract at all from viewing experience like some other ep's with edge distortion. The eye lens is positioned perfectly, not too far or close.
Both parfocal/very close parfocal with 35mm Panoptic. Except for the minute change in focus, I was unable to differentiate between the two by scope testing. I love the Celestron's grip ring, but the UO get points for attractive styling.

Shame on Celestron and the other brands for dropping this great eyepiece from production. Shame on University for not advertising it better. When I bought my first non-plossl, wide-field ep in 2001, it was the Meade 18mm SWA. A good ep, but twice the price of the current University Erfle.

I found another Celestron Erfle for a binoview pair. The University has been gifted to a friend on the occasion of his first homeade telescope and second child on the way.

Neither ep is mentioned in the article by Alan Dyer "Choosing Eyepieces: a Buyer's Guide" from Astronomy, June 1993.****

Neither ep will replace the 17 Nagler. I rue the day when the 35 Panoptic becomes obsolete.

I welcome your thoughts, opinions, and information.

*Where is Ken Fulton today? 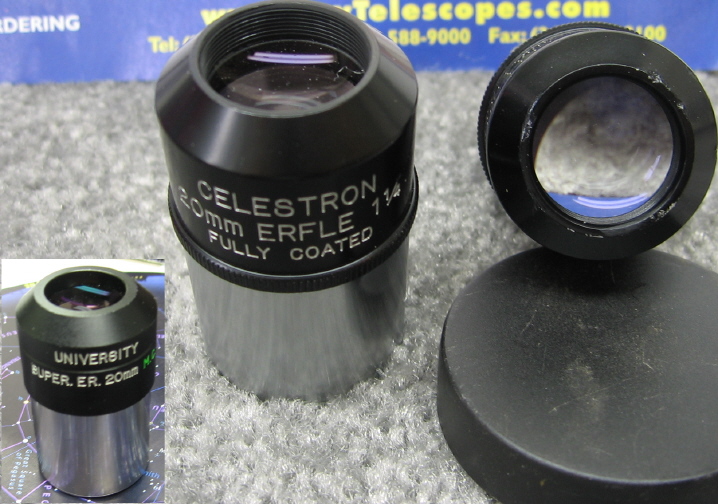 >>>My opinion: Both are very fine performers in f/15 and f/5 scopes. Wide field (60 deg?), sharp bright image, no ghost image. Some minor edge distortion in f/5, but not offensively so. Does not detract at all from viewing experience like some other ep's with edge distortion.
---

For about 5 years, I have owned the Celestron 20mm Erfle that appears to be identical to the one in your photo.

It does have 21mm field stop which implies an effective AFOV of 60.1 degrees.

I have used it in a variety of scopes ranging from F4 to F15. I find it performs quite well in an 6 inch F8 Newtonian like the RV-6 and enjoy using regularly in slower scopes. However that I find the edge performance marginal in an F6 scope and quite poor in an F-5 scope, I won't bother discussing it's F4 performance. Edge performance is one of those subjective personal choice issues but I would compare it to a UO Konig 16mm I had, the Synta Widefields (Orion Expanse etc) seem to provide better edge performance even in the 15mm and 20mm versions which do not have built in barlows, probably a similar design.