I would like to wish everyone the best of holidays and a Happy New Year. I have attached my latest observation of Saturn using a different instrument (8-inch F/5 Konus Newtonian reflector). I hope that you like it. 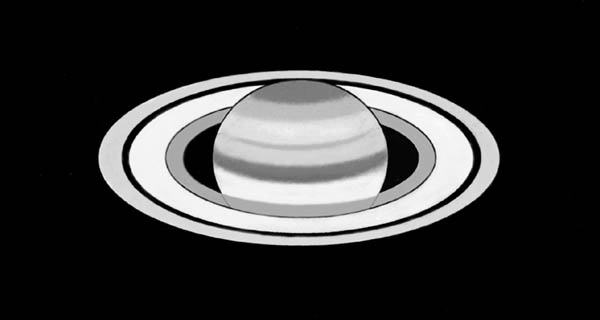 Thanks for showing this one.

You have pointed out a very interesting aspect of Saturn's rings with respect to their brightness variations. Ring A (outer ring) is usually dull (5/10) and may exhibit the infamous Encke minima (or division) . The Encke Division may be detected under steady seeing conditions using at least a 6-inch refractor or 8-inch Newtonian. Ring B (middle ring) exhibits the greatest variation in brightness due to it's diameter and proximity to Saturn (globe; ring particles reflecting a more intense (lumens) light from the globe). The outer portion of this ring does appear brighter than the inner half. This is due to variations within the ringlets (as we all know the rings are actually made up of thousands of ringlets as shown by the Voyager spacecraft). The passage of Saturn's magnetic field over the rings as the planet rotates may also affect their reflectivity (brightness). Ring C (Crepe, inner) is the darkest of the three major rings. This ring is most noticeable as it crosses the globe. At times spokes (radial dark features) are visible over the inner aspect of Ring B and may therefore "darken" this portion of the ring.

A reason that the the rings may appear more "homogenous" in CCD images is that processing (software) may "average" the brightness of the ring. The eye can pick out the subtle variation within the rings. A good example where the eye (if properly trained) can be an excellent detector for fine detail over the planets.

The best of luck in your own observatons and Happy Holidays.