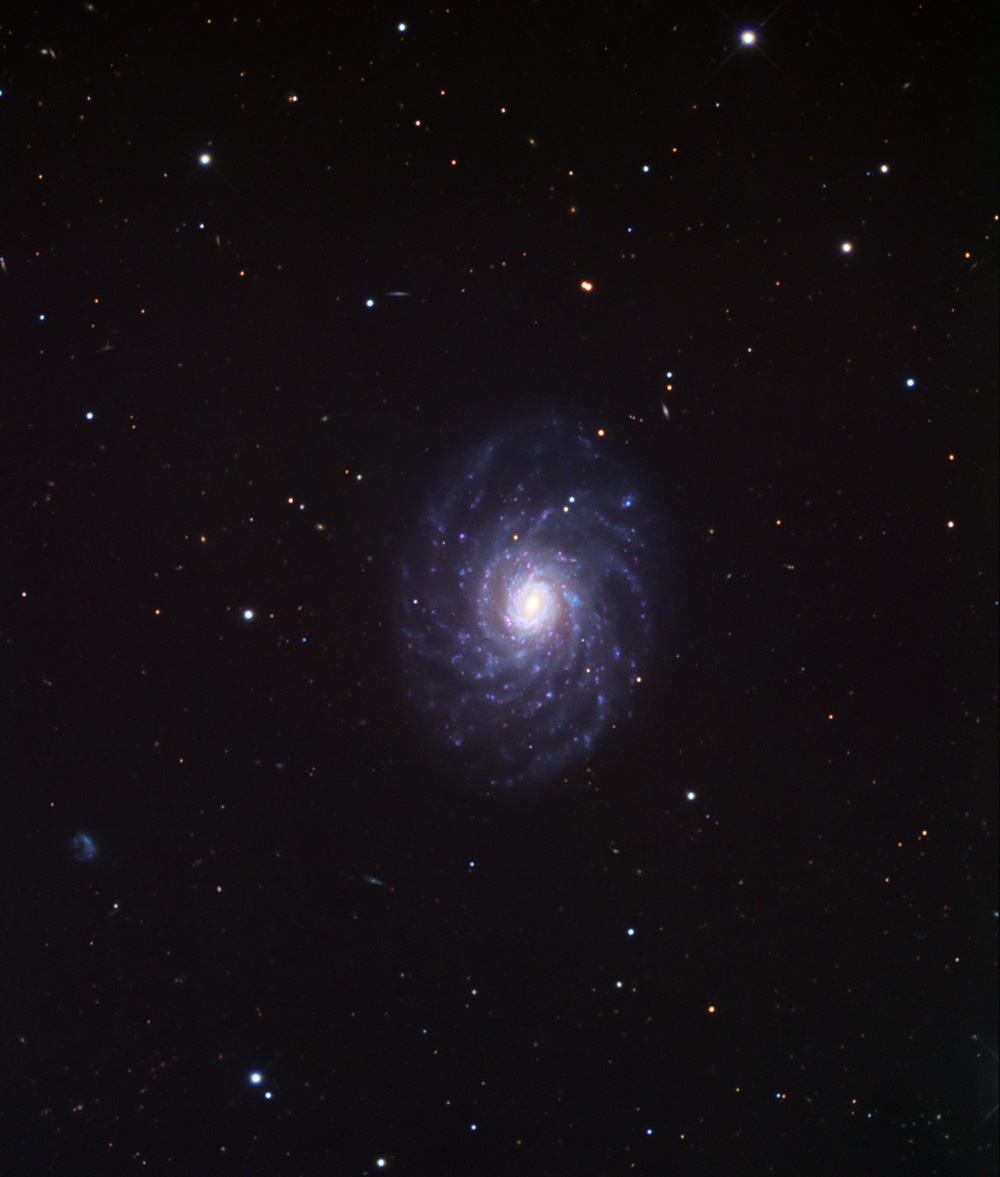 Posts Made By: Domenic Quadrini

September 25, 2004 02:58 AM Forum: Equipment Talk
Dick, I assume your setup will look something like this. (C-14 on a Losmandy GM-100) When deployed, the leveling bolts rest on blocks of wood and the nuts both on top and at the bottom of the bar are tightened to prevent wobble. I don't think I would chance rolling the rig over grass, though.
Dom Q.

February 9, 2005 05:14 PM Forum: Equipment Talk
Dmitri, rack the focuser out so that the end of the draw tube is at the position where the field stop of an eyepiece would be. Fasten a transparent ruler against the draw tube. Then, while shining a flashlight into the tube, look down the tube from the objective end and sight along the glare stop edges and note where on the ruler your line of sight lies. Do the same from the opposite side of the objective. The distance between the two marks at which your line of sight along the glare stops lies is close to the width of the fully illuminated field.
Hope this helps.
Dom Q.

February 22, 2005 06:35 PM Forum: Equipment Talk
After opening the package I found that Celestron had successfully performed the repair on the loose handle. When I originally called Celestron to get the repair authorization, I asked if they would also clean the optics, since there were some water spots on the corrector, presumably from dew. I was told that cleaning and collimating the optics was standard procedure on scopes returned for repair.

Upon inspecting the corrector, I found that the glass seemed nearly invisible. My initial reaction was, "Did they forget to install the corrector?" Of course, if they had, I realized that the secondary was in suspended animation.

I remember Roland Christen showing a photograph of his 10" RC, in which he noted that the coating on the corrector was so good that the secondary seemed to be floating in mid-air. Not trusting my initial reaction, (a man sees what he wants to see, etc....), I waited for my wife to come home from work and asked her to look at the scope from the corrector end.

"Look at this," I said, as I removed the dust cap. She wasn't sure of what she was supposed to see. "Looks nice," she said, and asked if she could reach inside the tube. As her hand moved toward the corrector, I gently held it back and said, "Don't you see the glass?" "Oh, I didn't realize it was there," she said. That is the gist of my tale.

My previous C-14 had standard Starbright Coatings, whose blue tinge was always obvious. But these XLT coatings, really seem to make the glass disappear.

In practical terms, the XLT's provide a 15% increase in transmission over the Starbright, which amounts to about 0.15 gain in magnitude, and for this scope is like adding an inch of aperture. Whether or not the XLT's will pay off in terms of increased visibility of low contrast planetary detail has yet to be seen, but I doubt that my observing site will ever allow me to see the difference. But, no matter; I use the C-14 mainly for deep space and save the sun, moon and planets for my 15-year old 6" Starfire.

P.S. I was very pleased with Celestron's prompt, courteous and competent service.


February 24, 2005 11:59 PM Forum: Equipment Talk
Tim, the method for calculating stop diameter in a refractor is the same as that for calculating the secondary minor axis in a Newtonian reflector with no secondary offset. The formula is ususlly used to calculate the diagonal size, given the size of the fully illuminated image.

In order to determine d, it is necessary to decide on the size of the fully illuminated image. Since you already are stuck with d (three of them) solve the formula for L to determine the distance of each stop from the focal plane of the objective.

For the stop diameters you've given, I calculate the following values for L with a fully illuminated 25mm field. (Please check my arithmetic.)

Hope this helps. Have fun with your project.

August 5, 2005 12:28 AM Forum: Film Astrophotography - Imaging and Processing
Beautiful pic, Jim. One thing I always like to know, besides film, exposure time, focal length and focal ratio -- what was the naked eye limiting magnitude?

August 5, 2005 12:31 AM Forum: Film Astrophotography - Imaging and Processing
Nice shot, Pete. What f/stop was the 28 mm lens set at and what was your naked eye limiting magnitude?

September 15, 2005 07:56 AM Forum: Digital SLR AstroPhotography
Looks just like the picture on one of the Sky&Telescope calendars -- Beautiful.

November 3, 2005 06:04 PM Forum: Digital SLR AstroPhotography
Nice shot(s), Ivan. Nice round stars and perfect focus. Actually, I'm surprised to see the red show so distinctly. You said this was a 20d and not a 20Da, correct? What equipment did you use besides the camera? Keep up the good work.
Dom Q.