Posts Made By: S Wagner

Anyone's true-mettle and character are best-known by:

1) that which we have accomplished and how we did so
2) those with whom we have associated and why
3) those we have helped and loved
4) the circumstances and trials through which all the above were forged/accomplished...

As a public, we make a grave mistake when we do not fully understand ALL of those 4 aspects of each/every candidate; and it is the Media's responsibility to ensure we do so...

A responsibility they, unfortunately, accept all too willingly if the candidate is a Sarah Palin or Christine O'Donnell, but don't pay lip service if it is an Obama...

What a Marroon... Yep - the Kochs actually paid those 100's of thousands who showed up in WDC on August 28th! And somehow "bought" all those votes that switched congress...

Keep up with the nutty conspiracy theories... you liberals and progressives will soon be under 20% representation in the Congress!

Yes, indeed, all the tea party is bankrolled by the uber-rich... that is really rich coming from Rich...

Maybe he should investigate Soros' funding of the entire Democrat party and president... oh, wait someone ELSE is already on THAT story!
ROFLMAO

So according to this latest Pew research poll, 7 out 10 Muslims reject Al Qaeda. And what about the other three out of ten that don't? And more favor the Hamas and Hezbollah.
That's not much of a repudiation of terrorism, now is it? :S
http://religion.blogs.cnn.com/2010/12/03/muslims-offer-mixed-views-on-hamas-hezbollah-reject-al-qaeda/?hpt=Sbin

Interesting... approximately 30% of Muslims are certifiable nut jobs.. who favor destroying society and returning it to the economic (and social) dark ages, where an elite few utterly control everyone's behavior 24x7x52...

Roughly the same percentage of Americans that are Liberal/Progressive...

An interesting column from the latest Time magazine:
http://www.time.com/time/nation/article/0,8599,2077943,00.html
An excerpt:
"Conservatives now espouse ideas drawn from abstract principles with little regard to the realities of America's present or past. This is a tragedy, because conservatism has an important role to play in modernizing the U.S.
Consider the debates over the economy. The Republican prescription is to cut taxes and slash government spending & then things will bounce back. Now, I would like to see lower rates in the context of tax simplification and reform, but what is the evidence that tax cuts are the best path to revive the U.S. economy? Taxes, federal and state combined as a percentage, of GDP are at their lowest level since 1950. The U.S. is among the lowest taxed of the big industrial economies. So the case that America is grinding to a halt because of high taxation is not based on facts but is simply a theoretical assertion. The rich countries that are in the best shape right now, with strong growth and low unemployment, are ones like Germany and Denmark, neither one characterized by low taxes."

Typical Time Lies, and no one cares pablum.... just a couple of factual errors:

what is the evidence that tax cuts are the best path to revive the U.S. economy?

Um, Zakharia? Hello? Anyone HOME in that skull of yours? Remember "Reagonomics?" Tax RECEIPTS more than doubled, while the marginal RATES were slashed... THERE is your evidence. The fact that deficits also went up was because the Congress would NOT approve the proposed Reagan spending cuts at the same time.

Taxes — federal and state combined — as a percentage of GDP are at their lowest level since 1950. The U.S. is among the lowest taxed of the big industrial economies.

BZZZZT. Wrong again. The US Corporate income tax is the HIGHEST (or in the top 3 or 4), not "among the lowest"... Taxes paid as a percentage of GDP is a bogus metric, because it doesn't describe several important points/aspects, including: paid by specifically WHOM; or the aspect that the way the government calculates GDP has completely changed multiple times over the years - much like they are conveniently re-defining how inflation is calculated (to their benefit).

In the 1950s, '60s and '70s, the U.S. government made massive investments in science and technology, in state universities and in infant industries. It built infrastructure that was the envy of the rest of the world. Those investments triggered two generations of economic growth and put the U.S. on top of the world of technology and innovation.

This one is the best, and most "clever" lie... all those so-called "investments" were made with BORROWED MONEY! And, combined with Johnson's "great society" stupidity, are precisely what started the debt bomb ticking that we are now faced with imminent explosion. It was therefore mostly fictitious "growth". Now, had those investments been SOLELY in infrastructural related areas, the Keynesian theory would actually have worked out as he IMPLIES. But no, the Democrats and Country Club republicans of the 50's through 70's, ALSO created the concept of "investing" in social welfare, setting up the healthcare cost crisis, and the debt bomb that is Medicaid/Medicare and Social Security.

The government doesn't INVEST; only private individuals, using REAL capital to make investment decisions, do so. Anything else is gambling and/or gaming the system.

When considering health care, for example, Republicans confidently assert that their ideas will lower costs, when we simply do not have much evidence for this. What we do know is that of the world's richest countries, the U.S. has by far the greatest involvement of free markets and the private sector in health care. It also consumes the largest share of GDP, with no significant gains in health on any measurable outcome.

This would be hilarious for it's ridiculousness, if he weren't so sanctimoniously serious!

he thinks we have no significant gains in health on any measurable outcome [scale]? Really? Is that why everyone comes from other countries HERE to get the BEST care? Is that why we've developed the best technologies? He seems to want it both ways simultaneously - btw a common Liberal mental condition (fugue?)... And he forgets that the crisis - which was always one of COST and not one of availability of technology or services - was created by the distortions introduced by Medicare/Medicaid in the first place. Government money chasing a "system" distorted it...

The only point he makes that I think is somewhat valid relates to the reality that our entire governmental taxing and regulatory system is so complex and "gamed" by special interests (Unions, Lawyers, special interest companies, etc.) that the net effect (post special interest loopholes) may be "lowest taxes per GDP" but they are coming from all the wrong places.

(This is why the Goldman Sach's, and large insurance companies, etc. of the world are equal opportunity "buyers" of politicians). THAT is the problem that must be addressed.

If he'd advocate a flat tax, then I just might believe he's given up on his liberal bias/orthodoxy... but the left will NEVER go there...

I think this was/is the name of the recent HBO documentary I saw (part of) last week. It's generally about the way the right has purchased the judicial system of the US. Pretty interesting/disappointing.

Well THAT is a load of horse manure!!! LOLOLOL

The "right" purchasing the judiciary? yeah, that's how we got court mandated abortion "rights" written into the constitution, and "gay marriage" as but two examples... yep, that evil right wing dominated judiciary...

Entitlement Programs:
1. Military Retirees
2. Federal Retirees
3. People who paid into a system through taxes (Social Security, Medicare, etc.)
4. People who have a bona fide disability or handicap.
5. Kids who have poor parents.
6. Parents who have kids and no means to support them.

Read Paul Ryan's plan sometime... it can be done

Obama will unveil the following stimulus:
1. Payroll tax cut
2. Extension of unemployment insurance benefits
3. Creation of an infrastructure bank to fund construction projects
4. Job initiatives targeting specific groups such as veterans.
http://www.latimes.com/news/opinion/commentary/la-oe-mcmanus-column-obama-unemployme20110807,0,7449126.column
And the GOP plan? Oh yeah, cut spending and everything else will take care of itself...

Yep, yet more proof he is INSANE (doing the same thing over and over even though it hasn't worked, yet)...
1) Payroll tax cut. This is nothing more than a temporary, Keynesian transfer of money into peoples pockets as a "one off" - btw: it will INCREASE the debt even more... so that don't cut it
2) Extension of unemployment benefits... - this will further incent folks to NOT work, AND increase the deficit, just like the first one did, more bankrupt Keynesian "logic"
3) The government creating a "bank" to fund stuff... didn't we do that with the FIRST stimulus already; you know all them roads and things? - also increases the debt further...
4) Job initiatives... yep, the government (that never CREATES anything) creating jobs...

Obama is certifiably insane, and this is the proof.

Government (just like in the late 70's the last time that Keynesianism ran amok) IS the problem... and the solution is the same: LESS government...

Oh yes I do realize we have a major spending issue too, but.....

20% on everything, for everyone, NO deductions...

Then the stinking rich end up paying more and all the lobbyists starve...

I know that there are still a few people that get very worried about onstoppable global warming after the annual sensational news reports of a large chunk of floating ice breaks off of the peninsula. This should help alleviate those sleepless nights.


Abstract: Surface air temperature (SAT) from four reanalysis/analysis datasets are analyzed and compared with the observed SAT from 11 stations in the Antarctic. It is found that the SAT variation from Goddard Institute for Space Studies (GISS) is the best to represent the observed SAT. Then we use the sea ice concentration (SIC) data from satellite measurements, the SAT data from the GISS dataset and station observations to examine the trends and variations of sea ice and SAT in the Antarctic during 1979â€“2009. The Antarctic sea ice extent (SIE) shows an increased trend during 1979â€“2009, with a trend rate of 1.36 Â± 0.43% per decade. Ensemble empirical mode decomposition analysis shows that the rate of the increased trend has been accelerating in the past decade. 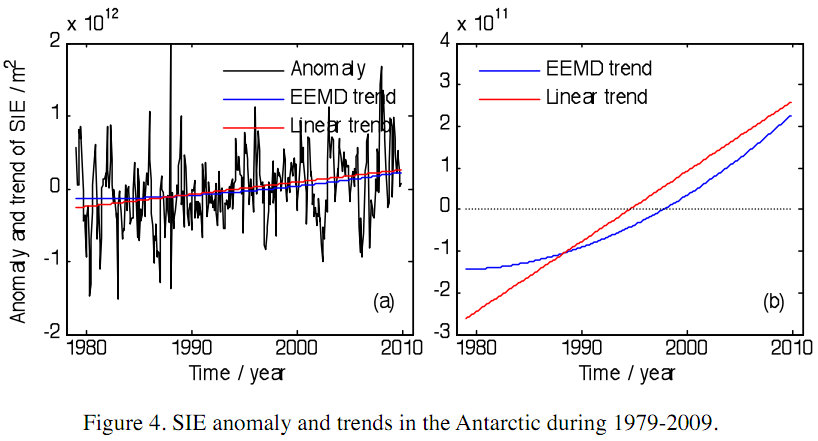 It must be "climate change"