Marj and I just got back from our trip to Chile. We visited Daniel Verschatse's astrofarm, otherwise known as Hacienda de Los Andes. We spent 3 nights using the superb equipment that Daniel has installed there, which included an AP 175EDF refractor on a 1600 mount inside a clamshell dome, another 1600 mount with 14.5" RCOS scope in a second clamshell. Both of these were set up with 35mm format CCD cameras (STL11K). In the original roll-off roof he has a 200mm F7 TEC fluorite refractor on a 1200 mount, which is uses for visual observing and forms the basis for his guest star parties. He has several concrete pads for guest to set up their own scopes, one of which he set up his own 12.5" Portaball Dob for visual observing.


I used the AP 175EDF scope to do 3 nights of imaging from dusk to dawn (almost no sleep for me for 3 days - I was running on adrenaline). It was an incredible experience to image the southern sky with pristine sky above, total clarity the likes of which I have not seen, in pitch blackness with no light domes anywhere on the horizon in any direction. Daniel's Astrofarm is located in a valley in the Andes mountains some 50 miles inland, and just a stone's throw from world class Cerro Tololo observatories.


While the refractor was taking images, I had a chance to take wide field Milky Way shots with my digital camera, mounted to a little Vixen Polarie tracking mount. This is really a nice item to take with on any trip, since it lets you take snapshots of the sky at night with your "tourist" camera. I also joined Daniel and some of the other visiting amateurs for impromptu viewing of deep sky objects thru the 12.5" Dob and the 8" TEC fluorite. The Dob has a Zambuto F5 mirror, and it was fun to compare the different objects when viewed thru the Dob versus the TEC fluorite. Now I'm a refractor guy, so I'm somewhat biased, however I was very impressed with the views in the Zambuto mirror. We ranged in power from about 60x to about 300x and viewed various types of objects from open clusters, globulars, small faint planetary nebulas, large H-2 regions in the Milky Way and various southern glaxies.

The Portaball Dob mechanical design is of course legendary and brilliant. It is too bad they are not being made now. If you ever see one for sale, don't pass it up.


The F5 Zambuto mirror showed nice sharp images at all powers. We used the latest 100 degree Telvue Ethos as well as the Televue Nagler "hand granade" for wide field. No noticeable coma in any of the oculars, low, medium or high power. It seems that for a 12" parabola, the F5 focal ratio hits a sweet spot in performance and useability. The view of the Carina nebula was not less than totally awesome! At 60X it resembled a boiling Midwest thunderstorm seen from above the clouds. The one image I took of this nebula does not do justice to the eyepiece views (will post the image tomorrow).


The seeing on all of our nights was not perfect by any means, but good enough to get incredible views. Comparing the views in the 8" TEC fluorite, there were noticeable differences to my eye. Most objects were a bit dimmer in the refractor, but the stars looked less "busy" compared to the Dob. They were clean sharp little dots with less motion and better contrast at all powers. The background was definitely darker, although the Portaball was pretty darn impressive in that respect. On small globulars the refractor nailed the view with powder sugar stars, and the focus was at one place, bang on - no hunting back and forth. You knew you were in focus because a tiny bit either way and it was out. In the Dob the exact focus point was not quite as definite. You had the feeling that if the seeing had been perfect, the Dob would have pulled ahead simply because of the resolution of a 12.5" versus an 8" aperture. Under the conditions we had, the refractor had the cleaner sharper view.


Set up next to me was one of our Chilean customers who comes to the Astrofarm several times a month for imaging. He set up his 130GT refractor on a Mach1 mount and a QSI583 CCD to do medium wide field imaging of deep sky objects. On another pad was an amateur using a Takahashi mount and scope ( I believe it was a 90mm Tak ) for wide field mosaic images. In the clamshell next to me was another Chilean amateur doing imaging with the 14.5" RCOS scope. So, between the 4 of us we were sucking up photons from every which direction and not letting them go to waste hitting the Andean ground on this hillside.

My 175EDF setup was shooting some distant galaxies, and my Sony NEX7 was absorbing the southern Milky Way all night long. Little did I realize that I was imaging the area where just 2 nights later a Nova would appear. So I have before and after shots of the same region, and you can see in the 30 second exposures that nothing is there in the shot taken on the morning of Nov 30, and a 4th mag star appears in later shots taken in the first week of December. The Nova was discovered on Dec 2. Since I took wide field images with the Sony every night that I was at Daniel's place, I have to look thru my multitudinous frames to see if I imaged that region on Dec 1 and 2.


As soon as I process my Astrofarm images, I will post them on the group photo site.


More to come about the second phase of our Chile trip, which was the visit to Las Campanas Observatory (home to the twin 6.2 meter Magellan telescopes), and our adventure being visiting astronomers at that world class facility (yes we got to use and image with a meter class scope on the night sky - well 0.305 meter to be exact, but what a thrill).


By the way, Orion is upside down in the southern Hemisphere, and to me she looks like the cigar lady that used to be in Hotel lobbies, complete with the board upon which are the cigars, cigarettes and Tiparillos. In her left hand she is holding up a cigar. If you then lie down on the ground with your feet pointing south and look up, by golly there is Orion the Hunter again, looking just as it does up here in the north country. Try it yourself - lie down with your feet pointing north, and you will see the cigar lady.

Nice report. Thanks for sharing. I have yet to get to the southern hemisphere but it is on my bucket list. Maybe I need to move it up in my priorities.

Couple of images from the Chile trip.
NGC1365 taken with Daniel's 175EDF refractor 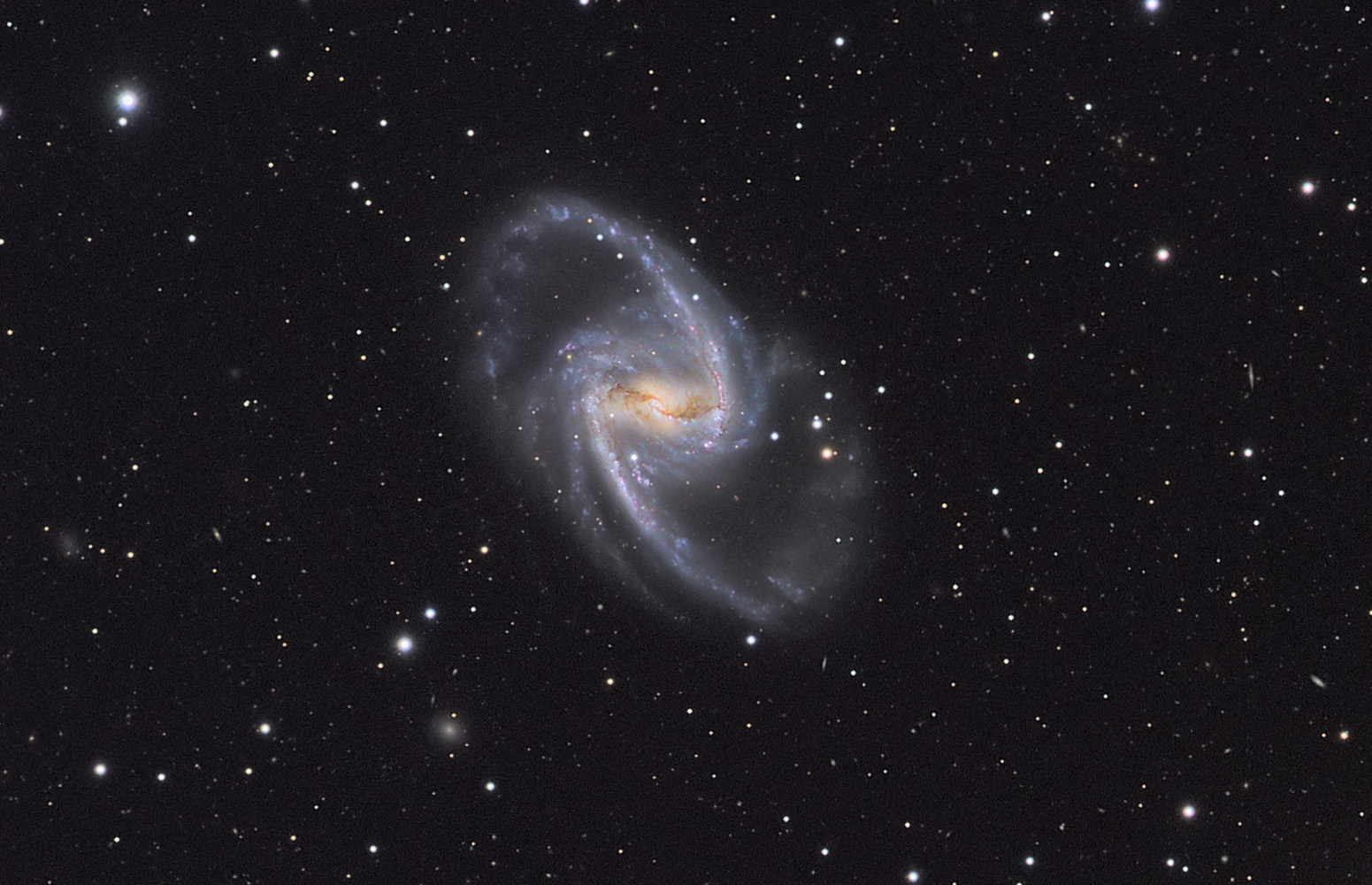