115th Anniversary of the Discovery of the Antikythera Mechanism 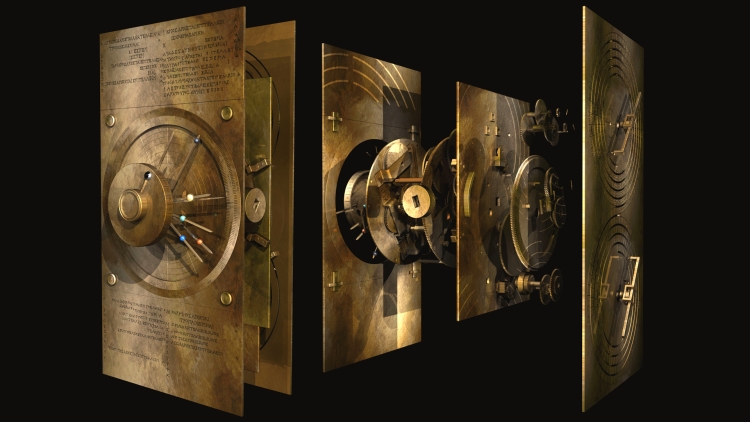 In 1900, an extraordinary mechanism was found by Greek sponge divers at the bottom of the sea near the island of Antikythera, situated between Crete and mainland Greece. Two years later, on May 17, 1902, Greek archaeologist Valerios Stais, discovered that this corroded chunk of metal pulled from the water was a rather fascinating technological artifact. It turned out to be part of the Antikythera Mechanism -- an ancient analog astronomical computer. For many decades, scientific investigation failed to yield much progress. However, research over the last 50 years has begun to reveal its secrets. The machine dates from around the end of the Second Century BC, and is the most sophisticated mechanism known from the ancient world. Nothing as complex was to be created by human hands for at least the next 1000 years. The Antikythera Mechanism is now understood to be dedicated to astronomical phenomena and operates as a complex mechanical analog computer that tracks the cycles of the Solar System.

The sponge divers found the wreck of the First Century BC Roman merchant vessel stuffed full of Greek treasures, including beautiful bronzes, amphorae, glassware, and pottery. In the subsequent archaeology organized by the National Archaeological Museum in Athens, they also recovered this corroded and calcified lump of metal. Disregarded at the time, it has proved to be one of the deepest mysteries from the ancient world. The Antikythera Mechanism is now split into 82 fragments, with the main fragments being on display at the National Archaeological Museum in Athens. It is an agglomeration of bronze gearwheels, dials, and inscriptions that has puzzled and amazed scientists for the last hundred years. "The Mechanism is full of surprises," says Professor Alexander Jones of the Institute for the Study of the Ancient World in the USA, "and the latest revelations for the first time establish its cultural origin.

Previous Antikythera researchers have used the latest technologies available to them, such as X-ray analysis, to try to begin to unravel its complex mysteries. Starting in 2005, a new initiative began to build on this previous work using the very latest available scientific instrumentation and techniques. The Antikythera Mechanism Research Project, an international collaboration of academic researchers supported by some of the world's best high technology companies, aims to completely reassess the function and significance of the Antikythera Mechanism.

The project is under the aegis of the Hellenic Ministry of Culture and was initially supported by a grant from the Leverhulme Trust in the UK. The project has received strong backing from the National Archaeological Museum in Athens, which is custodian of this unique artifact. Two of the Museum's senior staff, Head of Chemistry Eleni Magou and Archaeologist-Museologist Mary Zafeiropoulou, have coordinated the Museum's side of the project and were actively involved with the research.

One UK and two Greek universities were the core of the academic research group in 2005 -- the astronomer Mike Edmunds and the mathematician and filmmaker Tony Freeth (University of Cardiff), the astronomer John Seiradakis (University of Thessalonica), the astronomer Xenophon Moussas and the physicist and historian of science Yanis Bitsakis (University of Athens). And last, but not least, the philologist and palaeographer Agamemnon Tselikas (NBG Cultural Foundation). After the first results were published in 2006, the AMRP began an important collaboration with Alexander Jones (Institute for the Study of the Ancient World in New York) and John Steele (Brown University).

During the first data gathering phase in the autumn of 2005, the most innovative technologies were used to reveal unknown elements of the mechanism. This research was carried out by two world class high technology companies, Hewlett Packard and X-Tek Systems from the UK. X-Tek's superb three dimensional X-rays were imaged using software from the leading German company, Volume Graphics. Technical support was also provided by the University of Keele in the UK. The whole process was filmed by Tony Freeth's Film and Television production company, Images First, for a TV documentary entitled "The World"s First Computer."

Specialized scientists from Hewlett Packard's Mobile and Media Systems Laboratory went to Athens with their innovative digital imaging system to examine the surface inscriptions and other features on the Antikythera Mechanism. The HP team brought a remarkable piece of equipment -- a Dome that surrounds the sample under examination and takes a series of still photos to analyze the three dimensional structure of the surface. This enabled astonishingly detailed examination of fine details such as faded and worn inscriptions. It has been a revelation for the research team.

Another team of specialists from the cutting edge company X-Tek Systems also went to Athens. Their aim was to use the very latest X-ray technology to look at the internal structure of the mechanism with its complex and confusing gear trains. With them, they brought the prototype of a very powerful new X-ray machine, the eight ton Bladerunner." Originally designed to search for minute cracks in turbine blades, this machine produced astonishingly detailed three dimensional X-ray images using the latest "microfocus" X-ray techniques. It opened a remarkable window on microscopic internal details of inscriptions and gearing at a resolution better than a tenth of a millimeter. Inscriptions can now be read that have not been seen for more than two thousand years, helping build a comprehensive picture of the functions of the Antikythera Mechanism.

"Using this 3D X-ray technique, for the first time we have been able to read inscriptions inside the Mechanism and the results have been a revelation," said Yanis Bitsakis, an Athens based scientist. "I have been working on these inscriptions with Dr Agamemnon Tselikas, and it has been very exciting. The inscriptions are like an instruction manual, telling the user the underlying way the machine worked."

In the autumn of 2006, the Antikythera Mechanism Research Project organized a major conference in Athens to present their research findings. These results opened a new chapter in the understanding of this extraordinary mechanism.

In July 2008, new results were published that focused on the functions of Back Dials of the Mechanism.

In July 2009, a major symposium was organized within the scope of the 23rd International Congress of History of Science and Technology. Members and collaborators of the research project and leading historians of science and technology discussed the position of the Antikythera Mechanism within the history of science, technology, and ideas.

A workshop was organized in Leiden in June 2013 where members of the AMRP, collaborators, and other specialists of the ancient world discussed the theme "The Antikythera Mechanism: Science and Innovation in the Ancient World."

A new survey on the Antikythera wreck site was initiated in 2014.

In June 2016, a publication of the full set of inscriptions of the Antikythera Mechanism was completed.

"We knew that this 2100 year old ancient Greek mechanism calculated complex cycles of mathematical astronomy. It really surprised us to discover that it also showed the four year cycle of ancient Greek games, including the Olympic Games," according to research scientist Dr Tony Freeth. "The first clues that suggested a link with the ancient cycle of Greek games came when the word "NEMEA" was read near a small subsidiary dial on the Mechanism." This was the site of the Nemean Games, one of the prominent "crown" games, which were part of the Olympiad cycle. "Other names followed, "ISTHMIA" for the games at Corinth, "PYTHIA" for the games at Delphi, and finally the hard to read "OLYMPIA" for the Olympic Games."

Using 3D X-rays, the researchers managed to read all the month names on a sophisticated 19 year calendar on the back of the Mechanism. "It has always been assumed that the Mechanism came from the Eastern Mediterranean, probably Rhodes, but these month names are from the Corinthian family of months, suggesting an origin on the other side of the ancient Greek world," asserts Professor Jones. One possible place of origin is Syracuse in Sicily, which in ancient Greece was a Corinthian colony. "People may rush to make a link with the great scientist, Archimedes, who lived in Syracuse and died there in 212 BC." says Professor Jones, "But the Mechanism itself was almost certainly made many decades after he died and the most we can say is that there is a possible link with a heritage of scientific instruments that might have originated with Archimedes."

The remarkable Antikythera Mechanism dates to around 150 to 100 BC. It was previously shown to display the date, positions of the Sun and Moon (including its variable motion), the phase of the Moon, a complex 19 year calendar, and sophisticated eclipse prediction dials. Now it is known to have also shown the cycle of ancient Greek games. "It is more complex than any other known device for the next 1000 years," says leading astronomer, Professor Mike Edmunds (Cardiff University, UK).

Professor Seiradakis advocates that, "It is as important for the history of science and technology as the Acropolis is for architecture."

Another aspect of the new work has been a deeper understanding of how the Mechanism predicted eclipses. "The basic idea was to use a cycle of repeating eclipses (the Saros Cycle) that was known in Babylonian astronomy hundreds of years before the Mechanism was made," according to Dr. Tony Freeth. "This cycle is just over 18 years and there is a large dial on the Mechanism that follows its progress." The eclipse predictions are marked on this dial and tell the user whether an eclipse is lunar or solar and what the time of day the eclipse should happen.

"It has been a real struggle to understand the organization of these predictions since they don't conform to the pattern we might have expected from Babylonian astronomy," says Dr. John M. Steele. "The Saros cycle of eclipses means that each time an eclipse repeats it happens eight hours later in the day. The Mechanism also includes a small dial that tells the user how to make this time adjustment."

"The work of the Antikythera Mechanism Research Project has been a major collaboration between a team of research scientists from Greece, the UK and, the USA, the National Archaeological Museum in Athens, and two world class technology companies, who have provided the data on which the new work depends." says Dr Tony Freeth. "Research progress has been really exciting. The Antikythera Mechanism is of crucial importance for the history of science and technology. It tells us of a revolution in human thought in ancient Greece -- the earliest known example of a machine for making calculations, of a machine for predicting the future. And now we are beginning to get clues to the cultural origins of this extraordinary Mechanism."