2009 Nobel Prize in Physics Goes to the Masters of Light 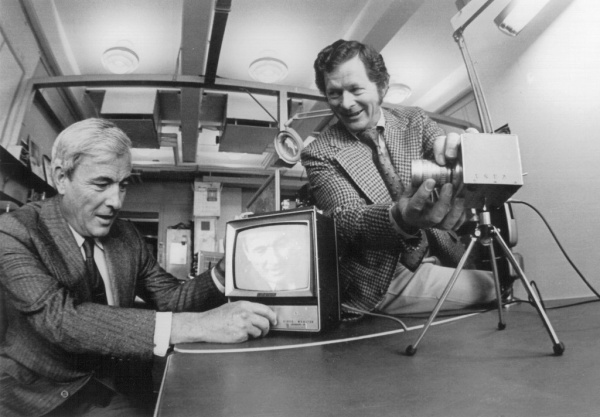 This year's Nobel Prize in Physics is awarded for two scientific achievements that have helped to shape the foundations of today’s networked societies. They have created many practical innovations for everyday life and provided new tools for scientific exploration.

In 1966, Charles K. Kao, a Director of Engineering at Standard Telecommunication Laboratories, Harlow, UK and later Vice-Chancellor at the Chinese University of Hong Kong, made a discovery that led to a breakthrough in fiber optics. He carefully calculated how to transmit light over long distances via optical glass fibers. With a fiber of purest glass it would be possible to transmit light signals over 100 kilometers, compared to only 20 meters for the fibers available in the 1960s. Kao's enthusiasm inspired other researchers to share his vision of the future potential of fiber optics. The first ultrapure fiber was successfully fabricated just four years later, in 1970.

Today optical fibers make up the circulatory system that nourishes our communication society. These low-loss glass fibers facilitate global broadband communication such as the Internet. Light flows in thin threads of glass, and it carries almost all of the telephony and data traffic in each and every direction. Text, music, images and video can be transferred around the globe in a split second.

If we were to unravel all of the glass fibers that wind around the globe, we would get a single thread over one billion kilometers long – which is enough to encircle the globe more than 25 000 times – and is increasing by thousands of kilometers every hour.

A large share of the traffic is made up of digital images, which constitute the second part of the award. In 1969 Willard S. Boyle and George E. Smith invented the first successful imaging technology using a digital sensor, a CCD (Charge-Coupled Device). The CCD technology makes use of the photoelectric effect, as theorized by Albert Einstein and for which he was awarded the 1921 year's Nobel Prize. By this effect, light is transformed into electric signals. The challenge when designing an image sensor was to gather and read out the signals in a large number of image points, or pixels, in a short time.

The CCD is the digital camera's electronic eye. It revolutionized photography, as light could now be captured electronically instead of on film. The digital form facilitates the processing and distribution of these images. CCD technology is also used in many medical applications, e.g. imaging the inside of the human body, both for diagnostics and for microsurgery.

This is the seventh Nobel Prize awarded to Bell labs, shared by 13 scientists, going back to 1937. Other Nobel prizes awarded to Bell Labs alumni have been for demonstrating the wave nature of matter, inventing the transistor, and for discovering the background radiation that remains from the Big Bang.

CCD technology, which transforms patterns of light into useful digital information, is the basis for many forms of modern imaging.

Leveraging pioneering foundational work in both the transistor and solar cell technologies, both of which were invented at Bell Labs, Doctors Boyle and Smith designed and developed the first CCD in 1969. By 1970, the Bell Labs researchers had built the CCD into the world’s first solid-state video camera. In 1975, they demonstrated the first CCD camera with image quality sharp enough for broadcast television.

Since its invention, the CCD has spawned significant new industries and markets by enabling a wide range of products including digital cameras, camcorders, HDTV, security monitoring, medical endoscopy, modern astronomy, and video conferencing to name a few. The insights behind CCDs also played a crucial role in the emergence of optical networking, which is the underlying transport technology for both the Internet and all other core communication networks today.

Beginning in 1983, telescopes were first outfitted with solid-state CCD cameras, which enabled astronomers to study objects thousands of times fainter than the most sensitive existing photographic plates, and enabled scientists to image in seconds what would have taken hours before. Today, most optical observatories, including the Hubble Space Telescope, rely on digital information systems built around “mosaics” of ultra sensitive CCD chips. CCD-enabled cameras also are used in satellite observations of the earth for environmental monitoring, surveying, and surveillance.