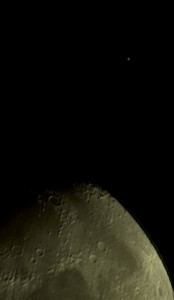 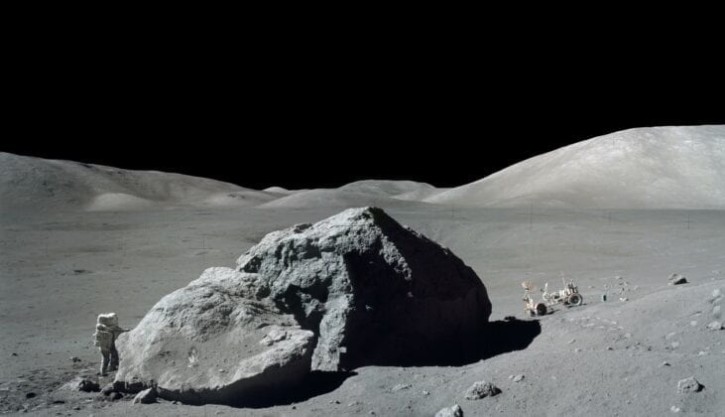 Curtin University researchers in Perth, Australia have helped uncover the four billion year old story of a lunar sample brought from the Moon to Earth by the Apollo 17 mission more than 50 years ago. The sample is very, very old -- around 4.2 billion years old. That’s only about 350 million years younger than the entire Solar System. (On a side note, that looks like an awfully big rock. I’m still trying to figure out how the astronauts were able to load that thing onto their Lunar Buggy and then the LEM for the return flight back to Earth. Buy hey, it was the Seventies -- I suppose anything was possible back then). (Image Credit: NASA, Gene Cernan)

A research collaboration involving scientists from the UK, Canada, Sweden, and Australia has analyzed an ancient rock sample brought from the Moon to Earth by the Apollo 17 astronauts more than 50 years ago. By using modern techniques, the team was able to determine the rock’s age, from which crater it came, and its geological trajectory. It turns out that the sample is very, very old -- around 4.2 billion years old. That’s only about 350 million years younger than the entire Solar System.

The modern analytical techniques, which were simply not available at the time the samples were originally collected, were performed, in part, by Curtin University’s Geoscience Atom Probe Facility and Space Science and Technology Center (SSTC), where the research team was able to use the most advanced analytical equipment to accurately date the sample and perform sophisticated numerical impact simulations to determine the source crater.

“Through a truly international collaborative effort, we have connected a tiny lunar sample investigated on a microscopic scale with the moment when the Moon’s surface was smashed by a major impact event. The study showcases the extent of Curtin’s analytical and numerical capability to solve complex geological problems on a planetary scale,” Associate Professor Miljkovic said.

“Dating techniques (Uranium-Lead geochronology) suggested this sample from the Moon’s Serenitatis Basin is very old, around 4.2 billion years- that’s only about 350 million years younger than the entire Solar System, making it a precious sample for learning about the Moon’s early evolution and our planet’s origins.

“The study also provides a new insight into the atomic scale processes that take place in minerals affected by extreme impact events. The analytical work done at Curtin’s Geoscience Atom Probe Facility looked at the distribution of atoms in the sample and found that it experienced not one, but two impact events. The second impact transported the sample near to its resting place where it was collected by astronauts.”

Numerical impact simulations made at Curtin’s Space Science and Technology Center supported the analytical findings with detailed understanding of the fate of this sample as it was flung across the Moon during the impact events that caused the craters.

Director of the SSTC, Professor Phil Bland said Curtin is proud to have played an integral part in uncovering this important story which provides an invaluable reference point to understand the entire bombardment history of the Earth-Moon system.

“This research shows that even the tiniest sample brought back from space may yield profound results that advance our understanding of the origins and evolution of Earth and planetary bodies in our Solar System,” Professor Bland said.

“It is also an excellent demonstration of the need for more space missions that aim to return samples to Earth, given that the scientific return is enormous.”

The research team was led by Dr Ana Cernok from Open University (UK) and also involved the University of Portsmouth (UK), the Royal Ontario Museum, University of Toronto, Universite de Sherbrooke (Canada), and the Swedish Museum of Natural History (Sweden).

Some aspects of the study were supported by the Australia Research Council, the Science and Industry Endowment Fund and The Institute for Geoscience Research (TIGeR).