Asaph Hall and the Moons of Mars 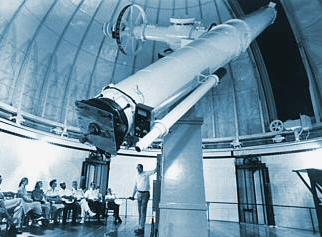 This discovery, made from the Observatory's old site in Foggy Bottom, won international acclaim for the Observatory and Hall, who was honored by many of the world's leading scientific associations.

In 1879 Hall was presented with the Gold Medal of the Royal Astronomical Society of Great Britain for his important find. This medal was presented to the Observatory by members of the Hall family on July 11, 1997. Today, in a ceremony in the Observatory's newly renovated Asaph Hall Building housing the "Great Equatorial", the Hall family will once again present the Observatory with other accolades given to their famous ancestor, as well as Prof. Hall's original Commission signed by Abraham Lincoln.

Asaph Hall was born on October 15, 1829 in Goshen, Connecticut. His early education was at the hands of his father and the local village school, but the death of his parents in 1842 forced him into apprenticeship as a carpenter. He had a passion for geometry and algebra, and in 1856 he obtained a position at the Harvard Observatory in Cambridge, Massachusetts. In August, 1862, he joined the staff of the Naval Observatory.

Here is a summary in Hall's own words of that discovery made 121 years ago with this telescope. Hall began his search on August 10, and found only some faint stars near the planet. Then, he says:

"I repeated the examination in the early part of the night of [August] 11th, and again found nothing, but trying again some hours later I found a faint object on the following side and a little north of the planet. I had barely time to secure an observation of its position when fog from the River stopped the work. This was at half past two o'clock on the night of the 11th. Cloudy weather intervened for several days.

"On Aug. 15th the weather looking more promising, I slept at the Observatory. The sky cleared off with a thunderstorm at 11 o'clock and the search was resumed. The atmosphere however was in a very bad condition and Mars was so blazing and unsteady that nothing could be seen of the object, which we now know was at that time so near the planet as to be invisible.

"On August 16th the object was found again on the following side of the planet, and the observations of that night showed that it was moving with the planet, and if a satellite, was near one of its elongations. Until this time I had said nothing to anyone at the Observatory of my search for a satellite of Mars, but on leaving the observatory after these observations of the 16th, at about three o'clock in the morning, I told my assistant, George Anderson, to whom I had shown the object, that I thought I had discovered a satellite of Mars. I told him also to keep quiet as I did not wish anything said until the matter was beyond doubt. He said nothing, but the thing was too good to keep and I let it out myself. On Aug. 17th between one and two o'clock, while I was reducing my observations, Professor Newcomb came into my room to eat his lunch and I showed him my measures of the faint object near Mars which proved that it was moving with the planet.

"On August 17th while waiting and watching for the outer moon, the inner one was discovered. The observations of the 17th and 18th put beyond doubt the character of these objects and the discovery was publicly announced by Admiral Rodgers."

The news took both the public and the astronomical world by storm. The Washington Evening Star for August 20 reported "Glorious news from the skies - Brilliant Discovery with the Great Telescope - Two satellites of Mars found by Prof. Hall." The British journal Nature announced the "extraordinary discovery" in its August 23rd issue. Nature characterized the discovery as "in the highest degree an honor to American science," the instrument, of American construction, being "a masterpiece of mechanical skill." Similarly, Scientific American called the discovery "a triumph both for Professor Hall and for Mr. Alvan Clark."

Leverrier at Paris Observatory, in the last few weeks of his life, called the find "one of the most important discoveries of modern astronomy." Visitors great and small streamed to the telescope even more than before, including the Vice President of the United States, who obligingly came on November 3 on a night, Hall duly reported, "good for naught but visitors."

For more information on the scope that made this discovery possible, visit: http://www.usno.navy.mil/USNO26in.shtml