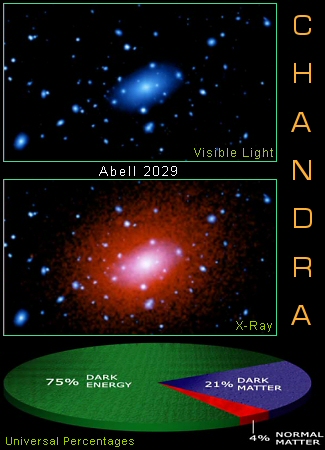 ... "Dark energy is perhaps the biggest mystery in physics," said study leader Steve Allen of the Institute of Astronomy (IoA) University of Cambridge, England. "As such, it is extremely important to make an independent test of its existence and properties," he said.

Allen and his colleagues used Chandra to study 26 clusters of galaxies at distances between one and eight billion light years. These data span the time when the universe slowed from its original expansion, before speeding up again, because of the repulsive effect of dark energy.

"We're directly seeing the expansion of the universe is accelerating by measuring the distances to these galaxy clusters," said IoA scientist and study co-author Andy Fabian. "The new Chandra results suggest the dark energy density does not change quickly with time and may even be constant, consistent with the "cosmological constant" concept first introduced by Albert Einstein," he said.

If the dark energy is unchanging, the universe is expected to continue expanding forever, and more dramatic fates for the universe would be ruled out. These include the "Big Rip," where dark energy increases until galaxies, stars, planets and, finally, even atoms are torn apart, and the "Big Crunch," where the universe eventually collapses on itself.

Chandra's probe of dark energy uses X-ray observations to detect and study the hot gas in galaxy clusters. From these data, the ratio of the mass of the hot gas to the mass of the dark matter in a cluster can be determined. Since galaxy clusters are so large, the relative amounts of hot gas and dark matter should be the same for every cluster. Using this assumption, Allen and colleagues derive distances that show the expansion of the universe was first decelerating, and it began to accelerate about six billion years ago.

Chandra's observations agree with observations of distant supernovae, including those from NASA's Hubble Space Telescope (HST), that first showed dark energy's effect on the acceleration of the universe. Chandra's results are completely independent of the supernova technique.

"Our Chandra method has nothing to do with other techniques, so they're definitely not comparing notes, so to speak," said Robert Schmidt of the University of Potsdam, Germany, another co-author of the study.

Better limits on the amount of dark energy, and how it varies with time, are obtained by combining the X-ray results with data from NASA's Wilkinson Microwave Anisotropy Probe (WMAP). It used observations of the cosmic microwave background radiation to discover evidence for dark energy in the very early universe. Using the combined data, Allen and his colleagues found dark energy makes up about 75 per cent of the universe, dark matter about 21 per cent, and ordinary matter about 4 per cent.

"Until we better understand cosmic acceleration and the nature of the dark energy, we cannot hope to understand the destiny of the universe," said Michael Turner, assistant director for mathematical and physics sciences, National Science Foundation, Arlington, Va.

The research team also included Harald Ebeling of the University of Hawaii and the late Leon van Speybroeck of the Harvard-Smithsonian Center for Astrophysics. These results appear in an upcoming issue of the Monthly Notices of the Royal Astronomy Society.

For information and images about this research on the Internet, visit: