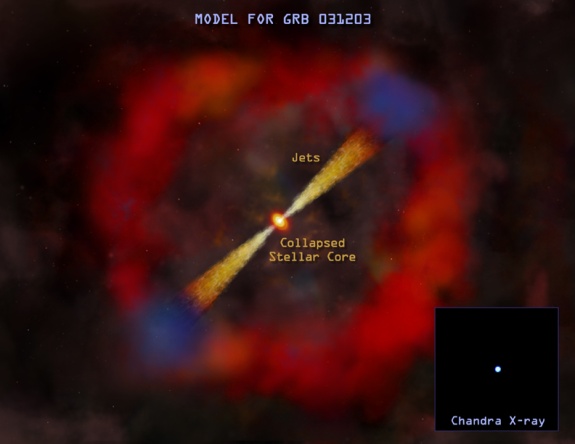 For more than a decade, scientists have puzzled over a dark mystery in distant galaxies: Why are some Gamma-Ray Bursts (GRBs) — the brightest electromagnetic events known in the universe — accompanied by visible "afterglows" of radiation while others aren't?

Astronomers offered plenty of speculation. Now they have answers.

"These 'dark bursts,' in which we didn't see the afterglows, actually do have them; they are just extremely faint," said Dieter Hartmann, a Clemson professor of physics and astronomy. "We can now explain their faintness with a combination of causes, the most important of which is the presence of dust between the Earth and the explosion."

Hartmann and a Clemson doctoral student in physics and astronomy, Adria Updike, are among a team of scientists, mostly in Europe, whose findings are being published Thursday in the journal Astronomy & Astrophysics.

The team used data from NASA's Swift satellite, in orbit around Earth, and followed up with measurements from GROND — short for Gamma-Ray Burst Optical/Near-Infrared Detector — a dedicated gamma-ray burst observation instrument which is attached to a telescope in Chile.

"Studying afterglows is vital to further our understanding of the objects that become gamma-ray bursts and what they tell us about star formation in the early universe," said Jochen Greiner of the Max Planck Institute for Extraterrestrial Physics in Germany, lead author of the study.

Discovered in 1967, gamma-ray bursts are believed to form during supernovae, as stars collapse to form black holes or as binary neutron stars merge with one another.

Thirty years after discovering the first gamma-ray bursts, scientists in 1997 detected visible afterglows, emissions of radiation at longer wavelengths, from X-rays and ultraviolet to optical, infrared and radio wavelengths. However, the afterglows didn't appear to accompany about half of the detected gamma-ray bursts, and astronomers were at a loss to determine why.

"It isn't an especially easy thing to measure," Hartmann said. "Gamma ray bursts are large explosions, very bright. But they are also very short. You have to respond quickly, take a spectrum and follow the decline."

The GROND instrument offered the scientists extremely fast response time: It can observe a burst quickly after an alert coming from the Swift satellite and can observe the event simultaneously through seven filters covering both the visible and near-infrared parts of the spectrum.

By combining GROND data taken through these seven filters with Swift observations, astronomers were able to accurately determine the amount of light emitted by the afterglow at widely differing wavelengths, all the way from high-energy X-rays to the near-infrared.

The astronomers used this information to directly measure the amount of obscuring dust that the light passed through en route to Earth. Previously, astronomers had to rely on rough estimates of the dust content.

The study was led by the Max Planck Institute for Extraterrestrial Physics in Germany. In addition to Clemson, contributing researchers came from Cambridge University in the United Kingdom, Germany's University of Technology in Munich and Thüringer State Observatory.