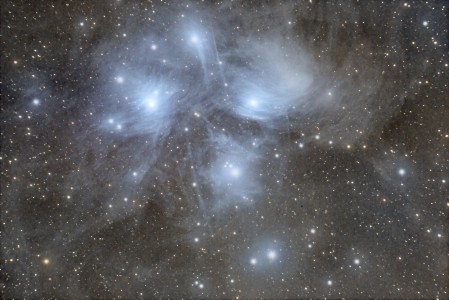 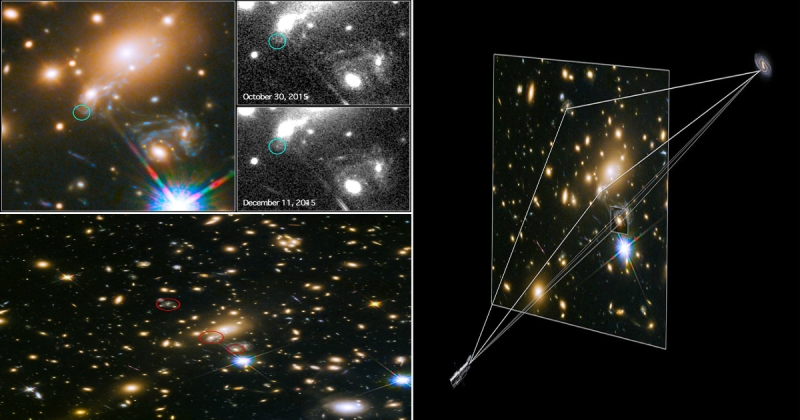 A distant and massive cluster of galaxies is acting like a time machine, replaying for the second time in 13 months the explosion of a massive star 9.3 billion years ago located near the edge of the observable universe.

Light from the supernova, dubbed Refsdal, reached Earth after first passing through a cluster of galaxies 5 billion light years away. According to Einstein's general theory of relativity, space becomes more curved and time moves more slowly the closer you get to an object like a star or a galaxy. And in this case, light traveling through the center of the cluster slowed enough to delay its arrival at Earth by more than a year.

Because large massive objects like this cluster also bend light, the light actually took several paths to reach Earth. The route that took the photons farthest from the center of the galaxy cluster probably brought the light to Earth in 1998, though no one was looking.

Kelly, however, saw the second arrival when examining a Hubble Space Telescope image taken on Nov. 10, 2014, and noticed that one big galaxy in the cluster actually split the light into four images -- a so-called Einstein cross. This was the first time multiple images of a supernova had been observed through a gravitational lens.

The supernova is so distant it would normally be too faint to see, but the Hubble Space Telescope was able to detect it because the gravitational lens also magnified it -- it was almost 20 times brighter.

Following that discovery, Kelly and his colleagues predicted that they would see the third and last replay within five years. In less than a week, however, more refined estimates lowered that to a year, and to date nearly a dozen teams of astronomers have made various predictions, many of which clustered around a window of 25 to 30 days sometime this fall, probably mid-November.

Beginning at the end of October, Hubble photographed the galaxy three times to try to catch the explosion. The Dec. 11th image unequivocally captured the supernova, and Kelly subsequently found it faintly visible in the image obtained a month earlier in mid-November.

"It felt almost reassuring" that the theory of relativity and the models based on it worked so well, said Kelly. "Hubble has showcased the modern scientific method at its best. Testing predictions through observations provides powerful means of improving our understanding of the cosmos."

The detection of Refsdal's reappearance served as a unique opportunity for astronomers to test their models of how mass, especially that of mysterious dark matter, is distributed within this galaxy cluster. The models that incorrectly predicted the reappearance will have to be tweaked, Kelly said.