Countdown to the Great American Solar Eclipse -- One Month from Today 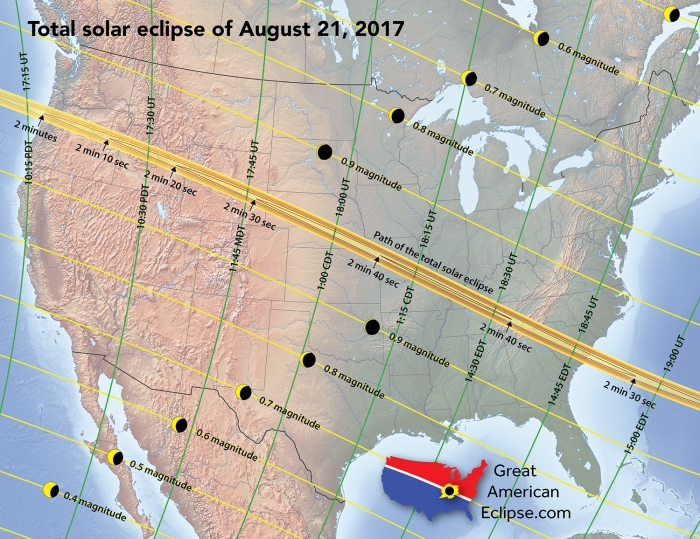 So, what will you be doing during the Great American Solar Eclipse of 2017? Observing? Photographing? Throwing a Great American Eclipse party in your backyard? In past total solar eclipses, people have spent thousands of dollars on extravagant trips and cruises to remote parts of the world to cross this experience off of their "bucket lists." This year, you will be able to walk outside and see one for yourself from the comfort of your home (weather permitting). On August 21, 2017 this truly spectacular event will shadow the United States for hours. Most of the nation will only see a partial eclipse, but if you are one of the lucky millions along the path of totality, you will experience about two minutes of mid-day darkness as the black shadow of the Moon races across the nation at about 2000 mph. During this brief period, numerous bright stars will be visible. The planets Jupiter and Venus will be easily spotted halfway up in the eastern and western skies, respectively, while fainter Mars and surprisingly, even Mercury will be on either side of the eclipsed Sun.

According to the Vanderbilt Dyer Observatory in Nashville, Tennessee, run-of-the-mill solar eclipses are fairly common. There are typically two solar eclipses per year occurring somewhere on Earth. Most people will witness at least one partial solar eclipse in their lifetimes. However, most will not have an opportunity to witness one of the true splendors of nature -- a total solar eclipse.

An eclipse occurs when one body passes in front of and obscures another body. In general, an eclipse typically refers to the Sun being blocked by the Moon (a solar eclipse) or the Earth blocking the Sun (a lunar eclipse). In order for this to occur, the three bodies (the Sun, Moon, and Earth) have to be in a nearly perfectly straight line. As a result, a solar eclipse can only occur during New Moon and a lunar eclipse can only occur during Full Moon.

Most viewers of a solar eclipse will not get the opportunity to witness the grandeur of a total solar eclipse because of the narrow strip of totality. As shown on the map, the Moon casts two shadows -- a lighter, outer shadow known as the "penumbra" and a darker, inner shadow known as the "umbra." From the viewpoint of the Moon, the Earth would be in a full phase and a noticeable shadow would sweep cross our planet in a matter of a couple of hours.

Eclipse viewers located in the larger penumbra shadow will only witness a partial solar eclipse. As the Moon glides along its orbit, a portion of the Sun, anywhere from a little less than one percent to approximately 99.9 percent will be blocked. The degree to which the Sun is obscured by the Moon during a partial solar eclipse depends on the observer's location on the Earth. The closer to the umbra (the darker, inner shadow of the Moon), the more of the Sun is obscured and the longer the partial eclipse.

If the Moon, Sun, and Earth are in a good position with respect to one another, then a privileged few will witness a truly spectacular eclipse -- a total solar eclipse. In order to view this event, one has to be in the umbra shadow of the Moon. The contact point of the Moon's cone shaped umbra is extremely small, resulting in a very narrow path of totality.

A number of factors determine how long one will be able to experience a total solar eclipse if in the path of totality. These include:

- The distance of the Earth from the Sun. The farther Earth is from the Sun, the smaller it will appear, and the easier it will be for the Moon to cover the solar disk.

Once totality is achieved, many splendors can be observed. When the solar disk is obscured, previously invisible features can become apparent.

The most spectacular feature is the solar corona -- the outer atmosphere of the Sun. Resembling bright, ghostly wisps, the corona consists of gas glowing at a temperature of one to two million degrees Celsius. Closer inspection of the corona will reveal structure in this very tenuous gas. The Sun's magnetic field attracts the hot, charged gas, which in turn outlines the complicated structure of the solar magnetic field.

During totality, one should not try to observe the solar corona with an unfiltered telescope. Though the corona is not bright enough to cause eye damage, the sudden reappearance of the Sun's disk to the unsuspecting observer can cause irreparable eye damage. In addition, the telescopic views will not be significantly better than naked eye observations.

One may also see some hints of red along the silhouette of the Moon, which may be one of two things. Some folks may observe that part of the edge of the Moon looks like it is highlighted by a very thin, deep red crescent. This glowing red feature is the lower portion of the Sun's atmosphere, which is known as the chromosphere. Named for its stark coloration, the chromosphere is approximately 10,000 degrees Celsius and is comprised of hydrogen gas emitting its distinctive red color.

Others may notice some individual red blobs along the edge of the Moon, some of which may look detached from the lunar limb. These are prominences -- large clouds of gas that are held in place by the Sun's magnetic field. Though the prominences may look small, they can sometimes be tens of times the width of the Earth.

Bailey's Beads are named after english astronomer Francis Baily who is credited as the first person to describe them after seeing an annular eclipse in 1836. The beads are due to the irregularities on the Moon's surface that allow slight portions of the Sun's surface (the photosphere) to shine through. The beads are typically most visible along the edge of the path of totality but can sometimes be observed in the few seconds before and after totality. (NOTE: Direct solar observation without proper eye protection should NOT be done when ANY of the beads are visible.)

The Diamond Ring effect occurs during the few seconds before and after totality while an extremely small fraction of the Sun's photosphere is still visible.

The most important factor to consider when observing any solar eclipse is solar safety. For most, if not all, of a solar eclipse at least a portion of the Sun's photosphere is visible. Even a small fraction of a percent of the Sun's photosphere emits enough infrared and ultraviolet light to permanently damage your eyes in a very short period of time. YOU MUST ENSURE THAT THE PROPER TECHNIQUES AND EQUIPMENT ARE USED TO SAFELY VIEW A SOLAR ECLIPSE. CARELESS OBSERVATION CAN RESULT IN EYE DAMAGE AND EVEN BLINDNESS.

During partial eclipse, when even the tiniest fraction of the Sun's surface is visible, PROPER EYE PROTECTION MUST BE WORN.