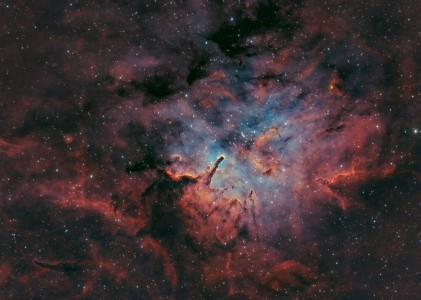 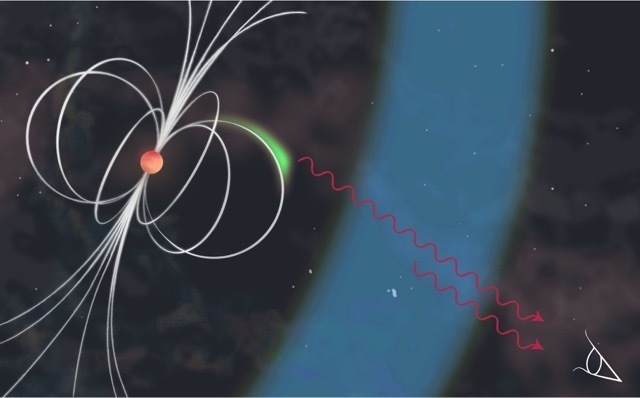 The Crab Pulsar has set a new record. It is sending out the most energetic light radiation that has ever been measured from a star. This observation could challenge our current understanding of pulsars. Moreover, a new mechanism, little understood up to now, appears to play a role in accelerating the particles to such high energies.

These findings were reported by a research team associated with the MAGIC telescopes. The MAGIC (Major Atmospheric Gamma Imaging Cherenkov) telescopes consist of two Imaging Atmospheric Cherenkov telescopes situated at the Roque de los Muchachos Observatory on La Palma in the Canary Islands.

The Crab Nebula is the remnant of a supernova explosion that was observed on Earth in the year 1054. The neutron star at the center of the Crab Nebula has a diameter of just around ten kilometers and rotates around its own axis at approximately 30 times per second. Thus, it emits light pulses like a lighthouse, and these pulses stretch across the entire electromagnetic spectrum -- from long radio waves to visible light and beyond, to the short waves of energetic gamma rays.

With the help of the MAGIC telescopes, scientists have discovered photons -- that is, particles of light -- with energy many times higher than what has been seen before. Until just a few years ago, the highest energy observable from the Crab Pulsar was thought to be at 6 GeV (Giga-electronvolts).

In 2008, the MAGIC telescopes recorded an energy spectrum of more than 25 GeV. The observatory trumped its own result in 2012 with measurements of 400 GeV. Since then, MAGIC has measured gamma rays up to 1.5 TeV (Tera-electronvolts). However, the researchers are not yet able to explain how the charged particles are accelerated to these extremely high energies.

"In the production of high-energy particles, a central role is played by the enormously strong magnetic field typical for neutron stars, which generates extremely strong electrical fields," says Razmik Mirzoyan, project leader at the Max Planck Institute for Physics. "In the magnetically charged, complex atmosphere of the neutron star, electrons and their antiparticles, the positrons, are accelerated to nearly the speed of light before they annihilate each other.

In this model, gamma ray energies up to a few Giga-electronvolts can be explained as synchrotron and curvature radiation. To account for the gamma pulses of more than 1.5 TeV that have now been observed, however, there must be another mechanism.

Mirzoyan elaborates -- "We can only observe extremely energetic gamma rays if these electrons somehow succeed in escaping the complex topology of the neutron star's magnetic field and accelerating themselves in the electric field. Then they join together with the lower energy radio waves and X-rays to form the pulsar's cone of light."

For the "escape" of the gamma rays, an indirect path is considered a possibility. In this process, it is not the electrons and positrons emerging directly from the pulsar that escape, but rather the second or third generation of their accelerated "offspring." These arise at the outermost edge of the magnetic field, at a height of approximately 1500 kilometers.

Here, simply put, energy-rich charged particles interact with ultraviolet radiation and X-rays as well as with the magnetic field. Subsequently, the secondary particles transfer their energy to lower energy photons, thereby transforming them into highly energetic gamma quanta, which then exit the magnetic field. This energy transfer is known as the "Inverse Compton Mechanism."

By means of the inverse Compton effect, gamma photons could also form far away from the pulsar, in the pulsar wind region where, likewise, the accelerated particles can encounter X-rays.

However, the extreme gamma rays arrive at the MAGIC telescopes simultaneously with lower energy radio waves and X-rays indicating that they are produced within the magnetic field.

"That would mean that all of the radiation is produced in a relatively small region at the edge of the magnetic field, or that the high energy gamma rays retain a kind of "memory" of radiation at lower energy. At this point in time we can hypothesize that the inverse Compton mechanism is capable of explaining the existence of such energy rich gamma rays from the pulsar. In the long run, however, we need new, detailed theoretical models that describe this phenomenon," Mirzoyan concludes.