Extreme Power of a Black Hole is Revealed 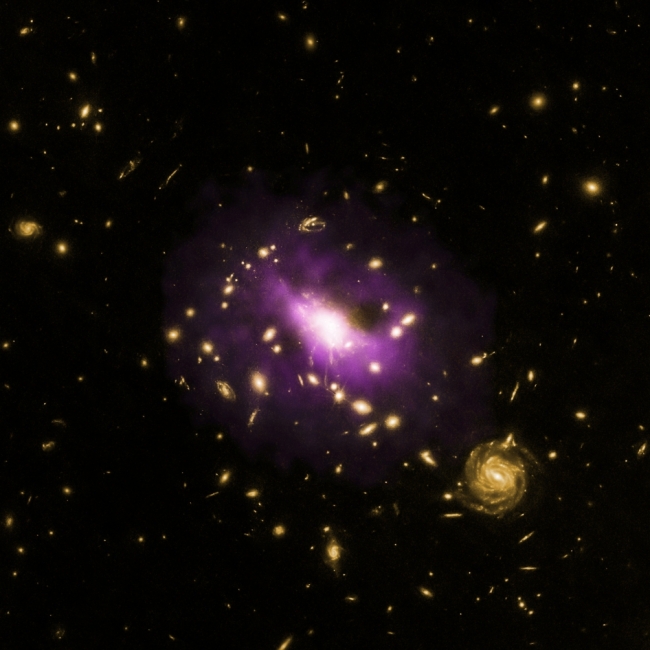 Astronomers have used NASA's Chandra X-ray Observatory and a suite of other telescopes to reveal one of the most powerful black holes known. The black hole has created enormous structures in the hot gas surrounding it and has prevented trillions of stars from forming.

The black hole is in a galaxy cluster named RX J1532.9+3021 (RX J1532 for short), located about 3.9 billion light years from Earth. The cluster is very bright in X-rays implying that it is extremely massive, with a mass about a quadrillion - a thousand trillion - times that of the sun. At the center of the cluster is a large elliptical galaxy containing the supermassive black hole.

This problem has been noted in many galaxy clusters but RX J1532 is an extreme case, where the cooling of gas should be especially dramatic because of the high density of gas near the center. Out of the thousands of clusters known to date, less than a dozen are as extreme as RX J1532. The Phoenix Cluster is the most extreme, where, conversely, large numbers of stars have been observed to be forming.

What is stopping large numbers of stars from forming in RX J1532? Images from the Chandra X-ray Observatory and the NSF's Karl G. Jansky Very Large Array (VLA) have provided an answer to this question. The X-ray image shows two large cavities in the hot gas on either side of the central galaxy. The Chandra image has been specially processed to emphasize the cavities. Both cavities are aligned with jets seen in radio images from the VLA. The location of the supermassive black hole between the cavities is strong evidence that the supersonic jets generated by the black hole have drilled into the hot gas and pushed it aside, forming the cavities.

Shock fronts - akin to sonic booms - caused by the expanding cavities and the release of energy by sound waves reverberating through the hot gas provide a source of heat that prevents most of the gas from cooling and forming new stars.

The cavities are each about 100,000 light years across, roughly equal to the width of the Milky Way galaxy. The power needed to generate them is among the largest known in galaxy clusters. For example, the power is almost 10 times greater than required to create the well-known cavities in Perseus.

Although the energy to power the jets must have been generated by matter falling toward the black hole, no X-ray emission has been detected from in-falling material. This result can be explained if the black hole is "ultramassive" rather than simply supermassive, with a mass more than 10 billion times that of the sun. Such a black hole should be able to produce powerful jets without consuming large amounts of mass, resulting in very little radiation from material falling inwards.

A more distant cavity is also seen at a different angle with respect to the jets, along a north-south direction. This cavity is likely to have been produced by a jet from a much older outburst from the black hole. This raises the question of why this cavity is no longer aligned with the jets. There are two possible explanations. Either large-scale motion of the gas in the cluster has pushed it to the side or the black hole is precessing, that is, wobbling like a spinning top.

This work was led by Julie Hlavacek-Larrondo from Stanford University. The Hubble data used in the analysis were from the Cluster Lensing and Supernova Survey, led by Marc Postman from Space Telescope Science Institute (STScI).