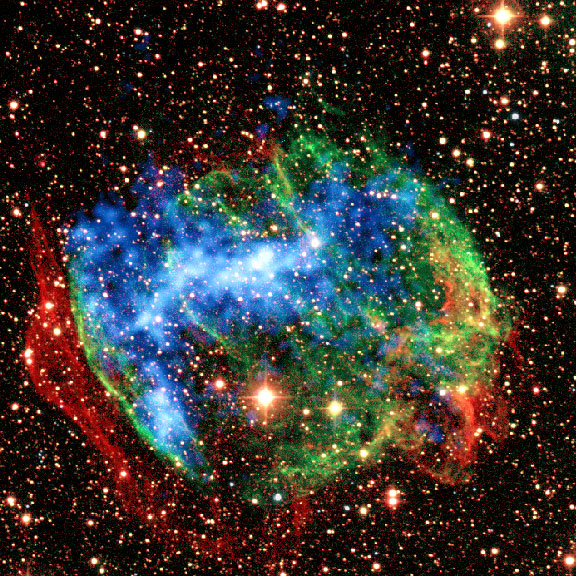 The first Gamma Ray Burst (GRB) to be seen in high-resolution from NASA's Fermi Gamma Ray Space Telescope is one for the record books. The blast had the greatest total energy, the fastest motions and the highest-energy initial emissions ever seen.

"We were waiting for this one," said Peter Michelson, the principal investigator on Fermi's Large Area Telescope at Stanford University. "Burst emissions at these energies are still poorly understood, and Fermi is giving us the tools to understand them."

Gamma Ray Bursts are the universe's most luminous explosions. Astronomers believe most occur when exotic massive stars run out of nuclear fuel. As a star's core collapses into a black hole, jets of material -- powered by processes not yet fully understood -- blast outward at nearly the speed of light. The jets bore all the way through the collapsing star and continue into space, where they interact with gas previously shed by the star and generate bright afterglows that fade with time.

This explosion, designated GRB 080916C, occurred at 7:13 p.m. EDT on Sept. 15, 2008 in the constellation Carina. Fermi's other instrument, the Gamma Ray Burst Monitor, simultaneously recorded the event. Together, the two instruments provide a view of the blast's initial, or prompt, Gamma Ray emission from energies between 3,000 to more than 5 billion times that of visible light.

Nearly 32 hours after the blast, Jochen Greiner of the Max Planck Institute for Extraterrestrial Physics in Garching, Germany, led a group that searched for the explosion's fading afterglow. The team simultaneously captured the field in seven wavelengths using the Gamma Ray Burst Optical/Near-Infrared Detector, or GROND, on the 2.2-meter telescope at the European Southern Observatory in La Silla, Chile. In certain colors, the brightness of a distant object shows a characteristic drop-off caused by intervening gas clouds. The farther away the object is, the redder the wavelength where this fade-out occurs. This gives astronomers a quick estimate of the object's distance. The team's follow-up observations established that the explosion took place 12.2 billion light-years away.

"Already, this was an exciting burst," said Julie McEnery, a Fermi deputy project scientist at NASA's Goddard Space Flight Center in Greenbelt, Md. "But with the GROND team's distance, it went from exciting to extraordinary."

With the distance in hand, Fermi team members showed that the blast exceeded the power of approximately 9,000 ordinary supernovae, if the energy was emitted equally in all directions. This is a standard way for astronomers to compare events even though gamma-ray bursts emit most of their energy in tight jets.

Coupled with the Fermi measurements, the distance also helps astronomers determine the slowest speeds possible for material emitting the prompt Gamma Rays. Within the jet of this burst, gas bullets must have moved at 99.9999 percent the speed of light. This burst's tremendous power and speed make it the most extreme recorded to date.

One curious aspect of the burst is a five-second delay separating the highest-energy emissions from the lowest. Such a time lag has been seen clearly in only one earlier burst.

"It may mean that the highest-energy emissions are coming from different parts of the jet or created through a different mechanism," Michelson said.

NASA's Fermi Gamma Ray Space Telescope is an astrophysics and particle physics partnership mission, developed in collaboration with the U.S. Department of Energy and important contributions from academic institutions and partners in France, Germany, Italy, Japan, Sweden, and the United States.