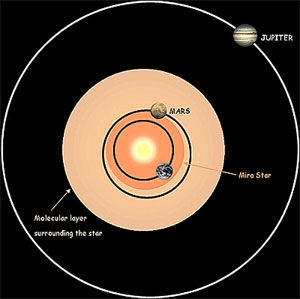 An international team of astronomers led by Guy Perrin from the Paris Observatory/LESIA (Meudon, France) and Stephen Ridgway from the National Optical Astronomy Observatory (Tucson, Arizona, USA) has used interferometric techniques to observe the close environments of five Mira stars, and were surprised to find that the stars are surrounded by a nearly transparent shell of water vapor, and possibly carbon monoxide and other molecules. This shell gives the stars a deceptively large apparent size. By penetrating through this layer using the combined light of several telescopes, the team found that Mira stars are likely only half as large as formerly believed.

“This discovery resolves nagging inconsistencies between observations of the size of Mira stars, and models describing their composition and pulsations, which now can be seen to generally agree with each other,” Ridgway explains. “The revised picture is that Mira stars are very luminous yet relatively normal stars of the asymptotic giant branch, but they have a resonant pulsation that drives their large variability.”

Mira stars are particularly interesting since they are similar in size to the Sun and they are undergoing a late stage of the same evolutionary path that all one-solar mass stars, including the Sun, will experience. Therefore, these stars illustrate the fate of our Sun five billion years from now. If such a star, including its surrounding shell, were located at the Sun’s position in our solar system, its vaporous shell would extend beyond the orbit of Mars.

Although they are really very large in diameter (up to a few hundred solar radii), red giant stars are point-like to unaided human eyes on Earth, and even the largest telescopes fail to distinguish their surfaces. This challenge can be overcome by combining signals from separate telescopes using a technique called astronomical interferometry that makes it possible to study very small details in the close surroundings of Mira stars. Ultimately, images of the observed stars can be reconstructed.

Mira stars are named after the first such known object, Mira (or Omicron Ceti). One possible explanation for their significant variability is that large amounts of material, including dust and molecules, are produced during each cycle. This material blocks much of the outgoing stellar radiation, until the material becomes diluted by expansion. The close environment of Mira stars is therefore very complex, and the characteristics of the central object are difficult to observe.

To study the close environment of these stars, the team led by Perrin and Ridgway carried out observations at the Infrared-Optical Telescope Array (IOTA) of the Smithsonian Astrophysical Observatory in Arizona. IOTA is a Michelson stellar interferometer, with two arms forming an L-shaped array. It operates with three collectors that can be located at different stations on each arm. In the present study, observations were made at several wavelengths using different telescope spacings ranging from 10 to 38 meters.

From these observations, the team was able to reconstruct the variation of the stellar brightness across the surface of each star. Details down to about 10 milli-arcseconds can be detected. For comparison, at the Moon’s distance, this would correspond to seeing features down to 20 meters in size.

The observations were made at near-infrared wavelengths that are of particular interest for the study of water vapor and carbon monoxide. The role played by these molecules was suspected some years ago by the team and independently confirmed by observations with the Infrared Space Observatory. The new observations using IOTA clearly demonstrate that Mira stars are surrounded by a molecular layer of water vapor and, in at least some cases, of carbon monoxide. This layer has a temperature of about 2,000 K and extends to about one stellar radius above the stellar photosphere, or roughly 50 percent of the observed diameter of the Mira stars in the sample.

Previous interferometric studies of Mira stars led to estimates of star diameters that were biased by the presence of the molecular layer, and were thus much overestimated. This new result shows that the Mira stars are about one-half as large as previously believed.

The new observations presented by the team are interpreted in the framework of a model that bridges the gap between observations and theory. The space between the star’s surface and the molecular layer very likely contains gas, like an atmosphere, but it is relatively transparent at the observed wavelengths. In visible light, the molecular layer is rather opaque, giving the impression that it is a surface, but in the infrared, it is thin and the star can be seen through it.

This model is the first ever to explain the structure of Mira stars over a wide range of spectral wavelengths from the visible to the mid-infrared and to be consistent with the theoretical properties of their pulsation. However, the presence of the layer of molecules far above the stellar surface is still somewhat mysterious. The layer is too high and dense to be supported purely by atmospheric pressure. The pulsations of the star probably play a role in producing the molecular layer, but the mechanism is not yet understood.

As Mira stars represent a late evolutionary stage of Sun-like stars, it will be very interesting to better describe the processes that occur in and around them, as a foreshadowing of the Sun’s own expected fate in the distant future. Mira stars eject large amounts of gas and dust into space, typically about one-third Earth mass per year, thus providing more than 75 percent of the molecules in the galaxy. The carbon, nitrogen, oxygen and other elements of which we are made were mostly produced in the interior of such stars (with heavier elements coming from supernovae), and are then returned to space via this mass loss to become part of new stars and planets. The maturing technique of interferometry is revealing details of the Mira atmosphere, bringing scientists close to observing and understanding the production and ejection of molecules and dust, as these stars recyle their contents on an astronomical scale.

The paper “Unveiling Mira stars behind the molecules: Confirmation of the molecular layer model with narrow band near-infrared interferometry,” by Perrin et al., will appear in an upcoming issue of the journal Astronomy & Astrophysics.

This press release comes from the NOAO -Ed.