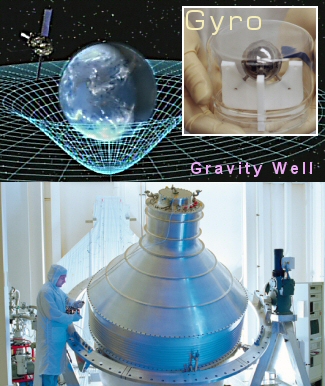 One month into the mission, all spacecraft subsystems are continuing to perform well. The spacecraft's orbit remains stable and meets our requirements for next month's transition into the science phase of the mission, upon completion of the spacecraft initialization and orbit checkout. The four gyroscopes are suspended, and we have indications that they are rotating slightly in their housings.

We reduce magnetic flux by turning on heaters and flowing helium gas, warmed to 10 Kelvin, through the probe. This process also drives off any residual helium remaining in the well of the Dewar, where the probe sits. The flux reduction procedure went smoothly, and when it was completed, the level of trapped flux remaining within the gyros was almost imperceptible. In fact, gyroscope #4, which previously had the highest amount of trapped magnetic flux of all the gyros now has the lowest level.

The flux reduction procedure added heat to the Dewar, thereby increasing the pressure inside to its maximum allowable level. The increased pressure during this stress period caused some of the spacecraft's micro thrusters to become unstable, resulting in the spacecraft pointing in the wrong direction and triggering a "safemode."

The 16 micro thrusters are arranged in clusters of four, and local feedback loops within each cluster enable the thrusters to communicate with each other and automatically adjust their flow rates. Ground commands were issued to isolate the unstable thrusters, which resolved the thruster cross-talk issue and enabled the spacecraft to re-orient itself. The thrusters are now functioning properly, the spacecraft's attitude has been corrected, and it is once again pointing towards the guide star.

The flux reduction operation and subsequent thruster instability and attitude problems has delayed locking the spacecraft onto the guide star, which will be our next major activity. While we have used up some of the contingency days built into the Initialization & Orbit Checkout (IOC) schedule, this phase of the Gravity Probe B mission is still on track for completion within 60 days after launch, at which time the 13-month science data collection will begin. This will be followed by a two-month final calibration of the science instrument assembly.

For future news, visit and bookmark: