How Does One Weigh a SuperMassive Black Hole? - Very Carefully 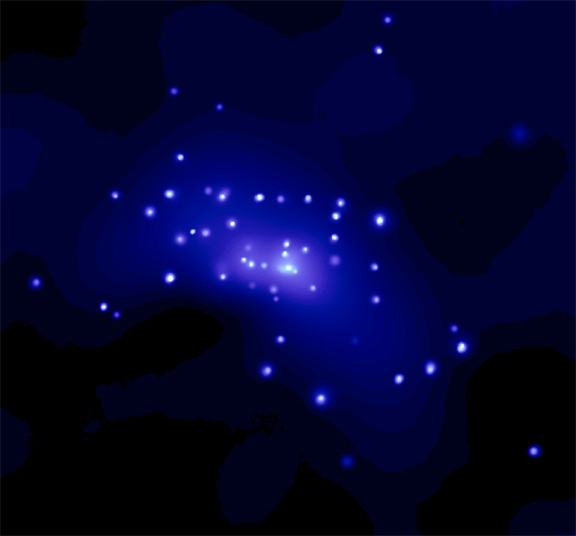 How do you weigh the biggest black holes in the universe? One answer now comes from a new and independent technique that University of California - Irvine (UCI) scientists and other astronomers have developed using data from NASA’s Chandra X-ray Observatory.

By measuring a peak in the temperature of hot gas in the center of the giant elliptical galaxy NGC 4649, scientists have determined the mass of the galaxy’s supermassive black hole. The method, applied for the first time, gives results that are consistent with a traditional technique.

Astronomers have been seeking different, independent ways of precisely weighing the largest supermassive black holes, that is, those that are billions of times more massive than the sun. Until now, methods based on observing the motions of stars or of gas in a disk near such large black holes had been used.

“This is tremendously important work since black holes can be elusive, and there are only a couple of ways to weigh them accurately,” said Philip Humphrey, leader of the study and an assistant project scientist in the Department of Physics and Astronomy at UCI. David Buote, associate professor of physics and astronomy at UCI, also worked on this study.

“It is reassuring that two very different ways to measure the mass of a big black hole give such similar answers,” Humphrey said.

NGC 4649 is now one of only a handful of galaxies for which the mass of a supermassive black hole has been measured with two different methods.

In addition, this new X-ray technique confirms that the supermassive black hole in NGC 4649 is one of the largest in the local universe with a mass about 3.4 billion times that of the sun, about 1,000 times bigger than the black hole at the center of our galaxy.

The new technique takes advantage of the gravitational influence the black hole has on the hot gas near the center of the galaxy. As gas slowly settles towards the black hole, it gets compressed and heated.

“It was wonderful to finally see convincing evidence of the effects of the huge black hole that we expected,” Brighenti said. “We were thrilled that our new technique worked just as well as the more traditional approach for weighing the black hole.”

The black hole in NGC 4649 is in a state where it does not appear to be rapidly pulling in material toward its event horizon, nor generating copious amounts of light as it grows. So, the presence and mass of the central black hole has to be studied more indirectly by tracking its effects on stars and gas surrounding it. This technique is well suited to black holes in this condition.

“Monster black holes such as this one power spectacular light shows in the distant, early universe, but not in the local universe,” Humphrey said. “So, we can’t wait to apply our new method to other nearby galaxies harboring such inconspicuous black holes.”