Is an Alien Life Form Consuming the Hydrogen and Acetylene on Titan? 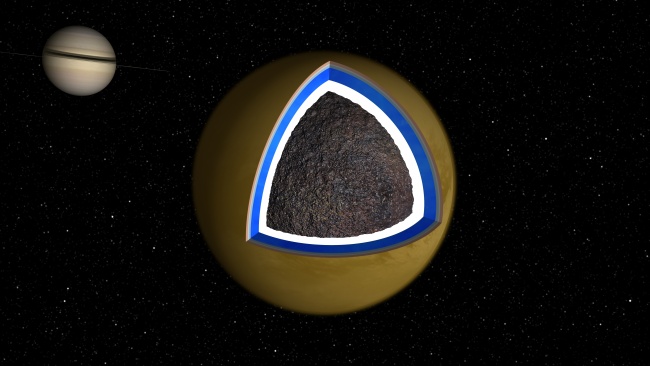 Two new research efforts based on data from NASA’s Cassini spacecraft have scrutinized the complex chemical activity on the surface of Saturn’s moon Titan. While non-biological chemistry offers one possible explanation, some scientists believe these chemical signatures bolster the argument for a primitive, exotic form of life or precursor to life on Titan’s surface. According to one theory put forth by astrobiologists, the signatures fulfill two important conditions necessary for a hypothesized "methane-based life."

One key finding shows hydrogen molecules flowing down through Titan’s atmosphere and disappearing at the surface. Another maps hydrocarbons on the Titan surface and finds a lack of acetylene.

This lack of acetylene is important because that chemical would likely be the best energy source for a methane-based life on Titan, said Chris McKay, an astrobiologist at NASA Ames Research Center, Moffett Field, CA, who proposed a set of conditions necessary for this kind of methane-based life on Titan in 2005. One interpretation of the acetylene data is that the hydrocarbon is being consumed as food. But McKay said the flow of hydrogen is even more critical because all of their proposed mechanisms involved the consumption of hydrogen.

"We suggested hydrogen consumption because it's the obvious gas for life to consume on Titan, similar to the way we consume oxygen on Earth," McKay said. "If these signs do turn out to be a sign of life, it would be doubly exciting because it would represent a second form of life independent from water-based life on Earth."

To date, methane-based life forms are only hypothetical. Scientists have not yet detected this form of life anywhere, though there are liquid-water-based microbes on Earth that thrive on methane or produce it as a waste product. On Titan, where temperatures are around 90 Kelvin (minus 290 degrees Fahrenheit), a methane-based organism would have to use a substance that is liquid as its medium for living processes, but not water itself. Water is frozen solid on Titan's surface and much too cold to support life as we know it.

The list of liquid candidates is very short: liquid methane and related molecules like ethane. While liquid water is widely regarded as necessary for life, there has been extensive speculation published in the scientific literature that this is not a strict requirement.

The new hydrogen findings are consistent with conditions that could produce an exotic, methane-based life form, but do not definitively prove its existence, said Darrell Strobel, a Cassini interdisciplinary scientist based at Johns Hopkins University in Baltimore, MD.

Strobel, who studies the upper atmospheres of Saturn and Titan, analyzed data from Cassini's composite infrared spectrometer and ion and neutral mass spectrometer in his new paper. The paper describes densities of hydrogen in different parts of the atmosphere and the surface. Previous models had predicted that hydrogen molecules, a byproduct of ultraviolet sunlight breaking apart acetylene and methane molecules in the upper atmosphere, should be distributed fairly evenly throughout the atmospheric layers.

Strobel found a disparity in the hydrogen densities that lead to a flow down to the surface at a rate of about 10,000 trillion trillion hydrogen molecules per second. This is about the same rate at which the molecules escape out of the upper atmosphere.

Strobel said it is not likely that hydrogen is being stored in a cave or underground space on Titan. The Titan surface is also so cold that a chemical process that involved a catalyst would be needed to convert hydrogen molecules and acetylene back to methane, even though overall there would be a net release of energy. The energy barrier could be overcome if there were an unknown mineral acting as the catalyst on Titan's surface.

The hydrocarbon mapping research, led by Roger Clark, a Cassini team scientist based at the U.S. Geological Survey in Denver, examines data from Cassini's visual and infrared mapping spectrometer. Scientists had expected the sun's interactions with chemicals in the atmosphere to produce acetylene that falls down to coat the Titan surface. But Cassini detected no acetylene on the surface.

In addition Cassini's spectrometer detected an absence of water ice on the Titan surface, but loads of benzene and another material, which appears to be an organic compound that scientists have not yet been able to identify. The findings lead scientists to believe that the organic compounds are shellacking over the water ice that makes up Titan's bedrock with a film of hydrocarbons at least a few millimeters to centimeters thick, but possibly much deeper in some places. The ice remains covered up even as liquid methane and ethane flow all over Titan's surface and fill up lakes and seas much as liquid water does on Earth.

"Titan's atmospheric chemistry is cranking out organic compounds that rain down on the surface so fast that even as streams of liquid methane and ethane at the surface wash the organics off, the ice gets quickly covered again," Clark said. "All that implies Titan is a dynamic place where organic chemistry is happening now."

The absence of detectable acetylene on the Titan surface can very well have a non-biological explanation, said Mark Allen, principal investigator with the NASA Astrobiology Institute Titan team. Allen is based at NASA's Jet Propulsion Laboratory in Pasadena, CA. Allen said one possibility is that sunlight or cosmic rays are transforming the acetylene in icy aerosols in the atmosphere into more complex molecules that would fall to the ground with no acetylene signature.

"These new results are surprising and exciting," said Linda Spilker, Cassini project scientist at JPL. "Cassini has many more flybys of Titan that might help us sort out just what is happening at the surface."

The Cassini-Huygens mission is a cooperative project of NASA, the European Space Agency and the Italian Space Agency. JPL, a division of the California Institute of Technology, manages the mission for NASA's Science Mission Directorate, Washington, D.C. The Cassini orbiter was designed, developed and assembled at JPL.