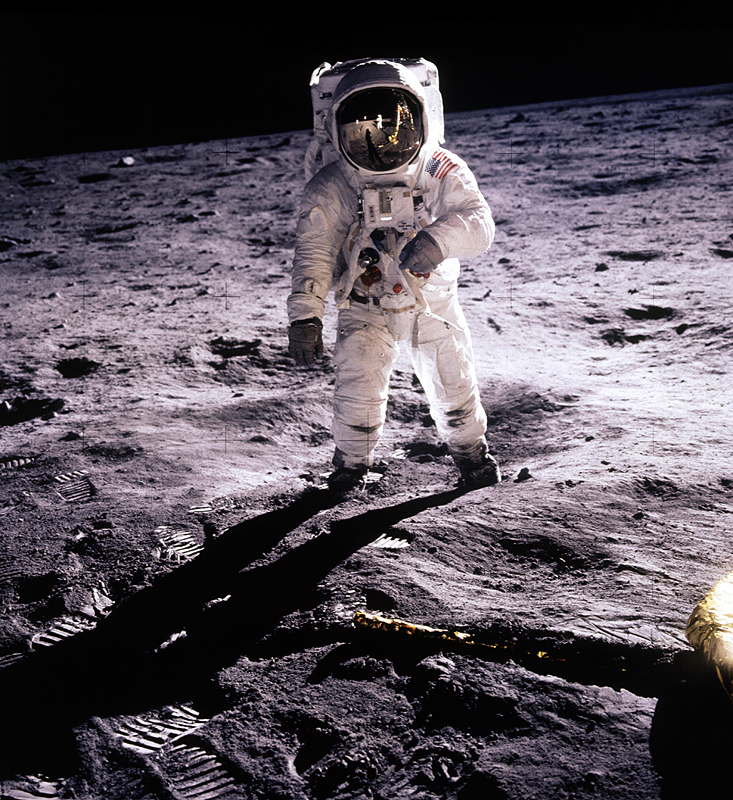 On that day, Apollo 11, at the top of a huge Saturn V rocket, lifted off from Cape Canaveral carrying astronauts Michael Collins, Neil Armstrong, and Buzz Aldrin on their historic mission.

In 1962, U.S. President John F. Kennedy had a challenge for NASA. The challenge was to land a man on the Moon before the end of the decade. The race to meet his goal would require some of the greatest technological achievements the world had ever seen.

The first Apollo missions were spent getting ready for the Moon landing. Apollo 8 and Apollo 10, for example, flew all the way to the Moon, around it, and back to Earth. Finally, everything was ready.

On July 16, 1969, Apollo 11 launched from Kennedy Space Center in Florida. The Apollo spacecraft reached Earth parking orbit after 11 minutes. After one and a half orbits, the Saturn thrusters fired and the astronauts began their journey to the Moon. The three traveled to the Moon and arrived in lunar orbit on July 20.

The Lunar Excursion Module "Eagle" carrying Neil Armstrong and Edwin Aldrin, separated from the Command Module "Columbia" and made its way to the lunar surface.

"Houston, Tranquility Base here. The Eagle has landed."

Immediately after landing on the Moon, Armstrong and Aldrin prepared the LEM for liftoff as a contingency measure. Following the meal, a scheduled sleep period was postponed at the astronauts' request, and the astronauts began preparations for descent to the lunar surface.

Astronaut Armstrong emerged from the spacecraft first. While descending, he released the Modularized Equipment Stowage Assembly (MESA) on which the surface television camera was stowed, and the camera recorded humankind's first step on the Moon.

"That's one small step for man, one giant leap for mankind."

As he left the LEM, Aldrin said, "Now I want to partially close the hatch, making sure not to lock it on my way out."

The two astronauts spent 21 hours on the moon. They did experiments and took pictures. They also brought back 46 pounds of Moon rocks.

The footprints left by the astronauts in the Sea of Tranquility are more permanent than many solid structures on Earth. Assuming that the footprints did not get blown away upon liftoff from the Moon surface and barring a chance meteorite impact, these impressions in the lunar soil will probably last for millions of years.

After their stay on the moon, the astronauts blasted off in the top part of the lunar lander. They docked with "Columbia," the Command Module. All three astronauts then rode back to the Earth in Columbia.

They splashed down in the Pacific Ocean on July 24, 1969, about 812 nautical miles southwest of Hawaii and were picked-up by the U.S.S. Hornet.

Forty years -- Half a lifetime. Yet for many of us, that adventure that started forty years ago today, is as fresh in our memories as if it happened just yesterday.

It was a special instant in time when the whole world paused for a moment and collectively held its breath.