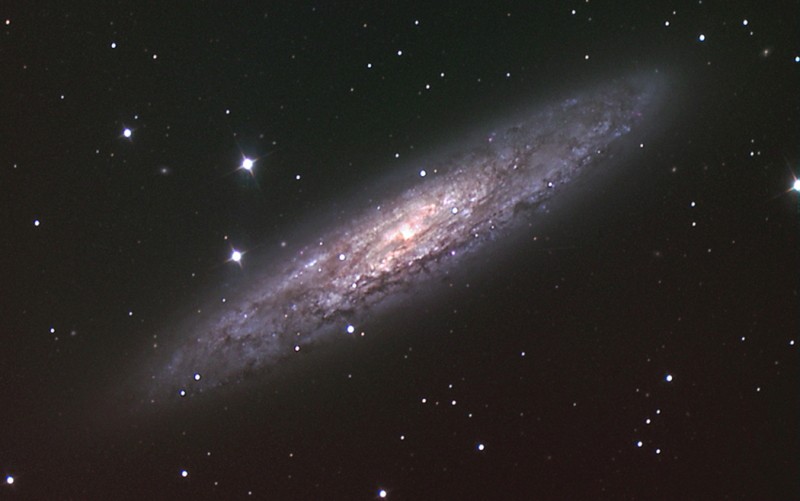 NGC 253 (C65) is one of the brightest spiral galaxies visible, but also one of the dustiest. It is known as the Sculptor Galaxy for its location within the boundaries of the southern constellation Sculptor. Discovered in 1783 by mathematician and astronomer Caroline Herschel, the dusty island universe lies 10 million light-years away. About 70 thousand light-years across, NGC 253 is the largest member of the Sculptor Group of Galaxies, the nearest to our own Local Group of galaxies. In addition to its spiral dust lanes, tendrils of dust seem to be rising from a galactic disk laced with young star clusters and star forming regions. The high dust content accompanies frantic star formation, earning NGC 253 the designation of a starburst galaxy. NGC 253 is also known to be a strong source of high-energy x-rays and gamma rays, likely due to massive black hole near the galaxy's center. [Video and Content Credits: NASA, the Office of Public Outreach – Space Telescope Science Institute (STScI), JPL – Caltech, Preston Dyches, Christopher Harris, and Lisa Poje] [Image Credit: Mark Keitel, Astromart Contributor, https://astromart.com/gallery/user/262)

Welcome to the night sky report for October 2022 -- Your guide to the constellations, deep sky objects, planets, and celestial events that are observable during the month. Enjoy the two giant planets Jupiter and Saturn all night throughout the month. Then watch as Mars begins its retrograde motion, moving westward each night instead of eastward, for the next few months. Finally, check out the Orionid meteors overnight on Oct. 20th. The crisp, clear October nights are also full of celestial showpieces for the deep sky gazer too. Find Pegasus, the flying horse of Greek myth, to pinpoint dense globular star clusters and galaxies. Look for M15, NGC 7331, and M31 - the Andromeda Galaxy. The night sky is truly a celestial showcase. Get outside and explore its wonders from your own backyard.

Giant planets Jupiter and Saturn are visible throughout the night in October. Early in the evening, you'll find them to the southeast, moving slowly westward with the stars over the course of the night. They form a triangle with bright star Fomalhaut.

When observing this trio, note how the planets shine with a steady light, while the star twinkles. This can be an easy way to know if what you're looking at is a planet or a star.

Mars has been steadily working its way toward the east all year like it usually does, relative to the background stars. But at the end of October, Mars halts this apparent motion, and then appears to reverse course. Over the next three months, from November to late January, Mars moves toward the west each night. Then near the end of January, it reverses direction again, and continues its eastward journey.

This is what's called the retrograde motion of Mars. It happens about every two years, and it really threw early observers for a loop. That Mars appears to change its direction is an illusion caused by the motions of our planet in its orbit passing by the Red Planet in its orbit.

This unexpected apparent motion can be easily explained. Earth and Mars are on these roughly circular paths around the Sun, like cars on a racetrack, and Earth is on the inner, faster track. About every 26 months, we overtake Mars, which is moving slower in its orbit. During that period when we're passing Mars, and before we round the bend in our orbit to pull away from it, we see Mars in retrograde, appearing to change direction, even though it's still moving forward in its orbit.

So take note of Mars over the next few months as it appears to reverse course. Note how its position changes with respect to Betelgeuse, Aldebaran, and the Pleiades over the weeks, and you'll be witnessing what was once a source of intense curiosity for astronomers, but which we now know is just a sign of two planets passing in the night.

The Orionid meteor shower is active throughout October and November, and peaks on the night of Oct. 20th. It's a moderate shower, usually producing 10-20 meteors per hour at its peak, under clear, dark skies. This year, the Moon will be about 20 percent full on the peak nights. So it will interfere a bit when it rises a couple of hours before dawn, but shouldn't totally spoil the viewing.

The shower's name comes from the fact that you can trace the paths of its meteors back to an area on the sky near Orion. These meteors are fragments of dust left behind by Comet Halley in a trail that extends along its orbit. They tend to be bright and fast moving, and they often leave persistent trails that can glow in the sky for a few seconds after they streak by.

No special equipment is needed to observe meteor showers. Just make sure you're warm enough and viewing from a safe, dark spot away from bright lights. Then all you have to do is look up and enjoy the show.

To observe the deep sky objects this month, face southeast after dark to find Pegasus, the flying horse of Greek myth, soaring high into the sky. The prominent square of stars that forms the body makes Pegasus a good guidepost for the autumn sky.

Along the western side of the Great Square of Pegasus lies the star 51 Pegasi. It is notable as the first Sun-like star discovered to harbor an orbiting planet.

Farther west, near the star Enif, which marks the horse’s nose, lays an entire city of stars: the globular star cluster M15. Backyard telescopes show a grainy, concentrated sphere of light. But NASA’s Hubble Space Telescope shows a stunning globe of ancient stars with many red giants. M15 is one of the densest globular star clusters known in the Milky Way galaxy.

Near the Great Square resides an even larger star city: the galaxy NGC 7331. In a telescope, the nearly edge-on spiral galaxy appears as an elongated smudge of faint light. The Hubble view shows that NGC 7331 is a galaxy very similar in size and structure to our own. NASA’s Spitzer Space Telescope’s view of the galaxy, which highlights infrared light, reveals a ring of dust circling the galaxy’s center at a radius of nearly 20,000 light-years. Spitzer measurements suggest that the ring contains enough gas to produce four billion stars like the Sun.

The brightest star of the Pegasus Great Square, named Alpheratz, marks the head of the princess Andromeda. Beside the Andromeda constellation is M31, the Andromeda Galaxy. Visible in dark skies as an elongated patch of light, the galaxy, at 2.5 million light-years distant, is the farthest object that can be seen with the unaided eye. Binoculars and small telescopes clearly show its nearly edge-on shape. NASA’s GALEX mission imaged the ultraviolet light from the Andromeda Galaxy and shows its core and spiral arms traced by hot, massive, young blue stars and dark dust lanes. Andromeda is the nearest large galaxy to our own. Studies indicate that Andromeda is approaching and will collide and merge with the Milky Way more than four billion years from now.

All month long, look high overhead early in the evening to find two bright stars that take turns with Polaris being the North Star. Their names are Vega and Deneb. Both of these stars are part of the Summer Triangle, along with Altair. To find Vega and Deneb, look high overhead in the first few hours after it gets dark. They'll be two of the brightest stars you can see.

Vega is a bluish-white star, and like Altair, it's a fast rotator, spinning every 12 and a half hours, compared to the Sun's 27-day rotation. NASA's Spitzer Space Telescope found Vega to have a debris disk around it that could be similar to regions in our own solar system.

Deneb is a blue-white supergiant star that is fusing hydrogen at a phenomenal rate.

With this sort of fury, the party won't last all that much longer. Deneb is likely headed for an explosive end as a supernova within a few million years. Deneb is much farther away than most bright stars in our night sky. This means it's super luminous to be that bright from so far away. Because it's so bright, it's one of the most distant stars you can see with the unaided eye.

These stars rotate around the northern celestial pole, and this time of year, they dip toward the western horizon before setting in the pre-dawn hours. Both Vega and Deneb are part of a special group of stars that take turns being the pole star in the north, as Earth's axis wobbles in a circle over a period of 26,000 years. For now the distinction of "North Star" belongs to Polaris, for at least a few hundred years more.