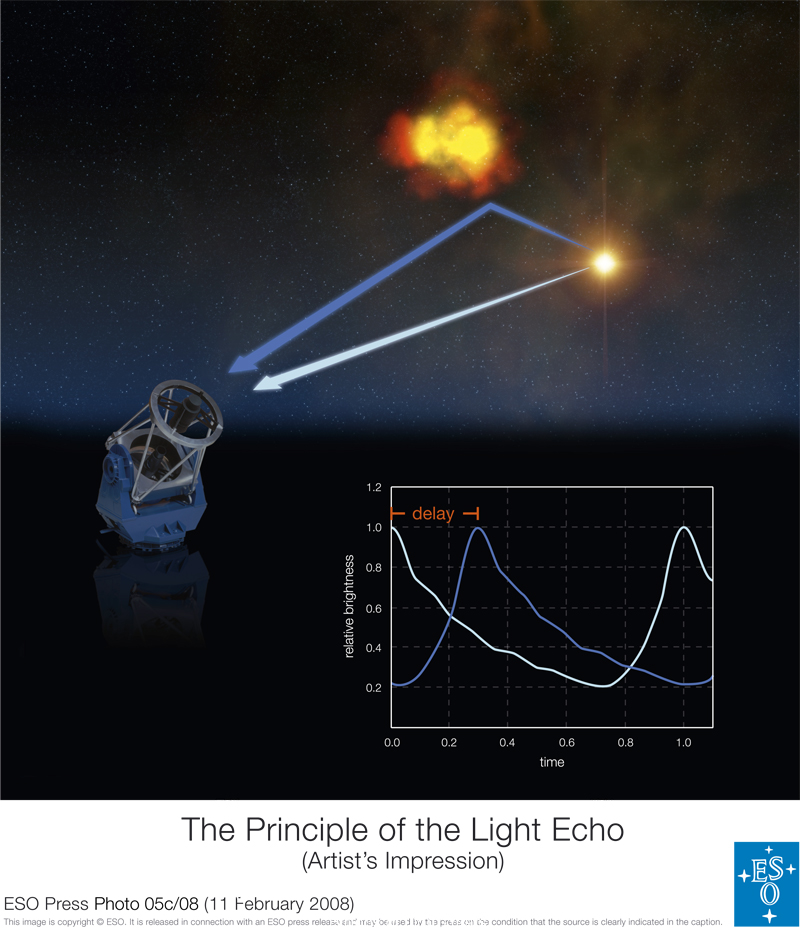 Taking advantage of the presence of light echoes, a team of astronomers have used an ESO telescope to measure, at the 1% precision level, the distance of a Cepheid - a class of variable stars that constitutes one of the first steps in the cosmic distance ladder.

"Our measurements with ESO's New Technology Telescope at La Silla allow us to obtain the most accurate distance to a Cepheid," says Pierre Kervella, lead-author of the paper reporting the result.

Cepheids are rare and very luminous pulsating stars whose luminosity varies in a very regular way. They are named after the star Delta Cephei in the constellation of Cepheus, the first known variable star of this particular type and bright enough to be easily seen with the unaided eye. Almost a century ago, in 1912, American astronomer Henrietta Leavitt published a relation between the intrinsic brightness and the pulsation period of Cepheids, the longer periods corresponding to the brighter stars. This relation still plays today a central role in the extragalactic distance scale.

The new accurate measurement is important as, contrary to many others, it is purely geometrical and does not rely on hypotheses about the physics at play in the stars themselves.

The team of astronomers studied RS Pup, a bright Cepheid star located towards the constellation of Puppis and easily visible with binoculars. RS Pup varies in brightness by almost a factor of five every 41.4 days. It is 10 times more massive than the Sun, 200 times larger, and on average 15 000 times more luminous.

RS Pup is the only Cepheid to be embedded in a large nebula, which is made of very fine dust that reflects some of the light emitted by the star. The nebula around RS Pup was discovered in 1961 by Swedish astronomer Bengt Westerlund, who later became ESO Director in Chile (1970-74).

Because the luminosity of the star changes in a very distinctive pattern, the presence of the nebula allows the astronomers to see light echoes and use them to measure the distance of the star.
"The light that travelled from the star to a dust grain and then to the telescope arrives a bit later than the light that comes directly from the star to the telescope," explains Kervella. "As a consequence, if we measure the brightness of a particular, isolated dust blob in the nebula, we will obtain a brightness curve that has the same shape as the variation of the Cepheid, but shifted in time."

This delay is called a 'light echo', by analogy with the more traditional echo, the reflection of sound by, for example, the bottom of a well.
By monitoring the evolution of the brightness of the blobs in the nebula, the astronomers can derive their distance from the star: it is simply the measured delay in time, multiplied by the velocity of light (300,000 km/s). Knowing this distance and the apparent separation on the sky between the star and the blob, one can compute the distance of RS Pup.

From the observations of the echoes on several nebular features, the distance of RS Pup was found to be 6500 light years, plus or minus 90 light years.

"Knowing the distance to a Cepheid star with such an accuracy proves crucial to the calibration of the period-luminosity relation of this class of stars," says Kervella. "This relation is indeed at the basis of the distance determination of galaxies using Cepheids."

RS Pup is thus distant by about a quarter of the distance between the Sun and the Centre of the Milky Way. RS Pup is located within the Galactic plane, in a very populated region of our Galaxy.