Low Sodium Diet is the Key to Old Age for Stars 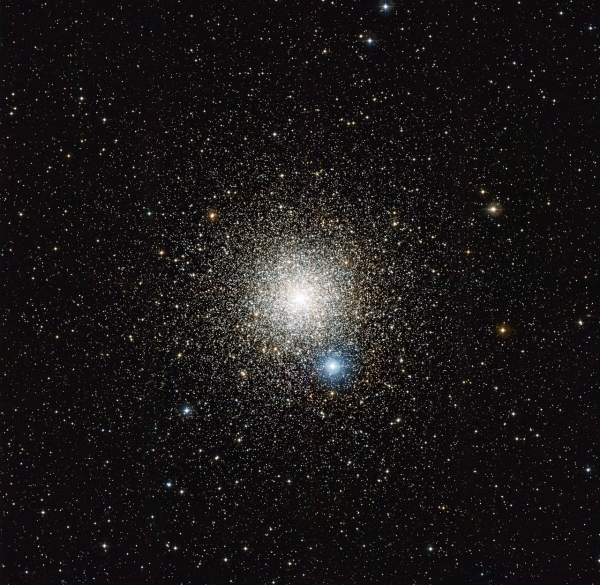 Astronomers expect that stars like our Sun will ultimately blow off much of their atmospheres into space near the ends of their lives. But new observations with the European Southern Observatory (ESO) Very Large Telescope (VLT) of a huge star cluster in the constellation Pavo have shown - against all expectations - that a majority of the stars studied simply did not get to this final stage in their lives at all. This has created a major headache for current stellar theories. It seems that the amount of sodium in the stars is a very strong predictor of how they end their lives.

The way in which stars evolve and end their lives was for many years considered to be well understood. Detailed computer models predicted that stars of a similar mass to the Sun would have a period towards the ends of their lives, called the Asymptotic Giant Branch or AGB, when they undergo a final burst of nuclear burning and puff off a lot of their mass in the form of gas and dust. AGB stars get their odd name because of their position on the Hertzsprung Russell diagram, a plot of the brightnesses of stars against their colors.

This expelled material goes on to form the next generations of stars and this cycle of mass loss and rebirth is vital to explain the evolving chemistry of the Universe. This process is also what provides the material required for the formation of planets - and indeed even the ingredients for organic life. For a short period of time this ejected material is lit up by the strong ultraviolet radiation from the star and creates a planetary nebula.

But when stellar theory expert Simon Campbell of the Monash University Center for Astrophysics in Melbourne, Australia scoured old papers he found tantalizing suggestions that some stars may somehow not follow the rules and might skip the AGB phase entirely.

"For a stellar modelling scientist this suggestion was crazy! All stars go through the AGB phase according to our models. I double-checked all the old studies but found that this had not been properly investigated. I decided to investigate myself, despite having little observational experience."

Campbell and his team used ESO's Very Large Telescope to very carefully study the light coming from stars in the globular star cluster NGC-6752 in the southern constellation of Pavo (The Peacock). This vast ball of ancient stars contains both a first generation of stars and a second that formed somewhat later. The two generations can be distinguished by the amount of sodium they contain - something that the very high quality VLT data can be used to measure. Although the stars in a globular cluster all formed at about the same time, it is now well established that these systems are not as simple as they were once thought to be. They usually contain two or more populations of stars with different amounts of light chemical elements such as carbon, nitrogen, and crucially for this new study - sodium.

"FLAMES, the multi-object high-resolution spectrograph on the VLT, was the only instrument that could allow us to get really high-quality data for 130 stars at a time. And it allowed us to observe a large part of the globular cluster in one go," adds Campbell.

The results were a surprise. All of the AGB stars in the study were first generation stars with low levels of sodium and none of the higher sodium second generation stars had become AGB stars at all. As many as 70 percent of the stars were not undergoing the final nuclear burning and mass-loss phase.

It is thought that stars which skip the AGB phase will evolve directly into helium white dwarf stars and gradually cool down over many billions of years. It is not thought that the sodium itself is the cause of the different behavior, but must be strongly linked in some way to the underlying cause, which remains mysterious.

"It seems stars need to have a low-sodium "diet" to reach the AGB phase in their old age. This observation is important for several reasons. These stars are the brightest stars in globular clusters, so there will be 70 percent fewer of the brightest stars than theory predicts. It also means our computer models of stars are incomplete and must be fixed!" concludes Campbell.

The team expects that similar results will be found for other star clusters and further observations are planned.