Meteoroid believed to have landed in Western Washington 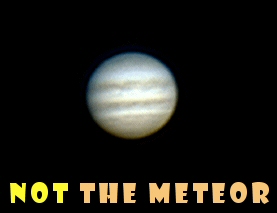 Bright flashes and sharp booms were reported in the skies over the Oregon and Washington early Thursday morning, and aviation officials say a meteor may have been the source.

However, a University of Washington scientist adds that a report that a meteor may have hit near Chehalis appears to be false. Toby Smith, a lecturer in astronomy who specializes in meteorites, says scientists are looking into the cause of the skybursts. Brilliant flashes were reported about 2:40 a.m. along a 60-mile swath of the sound from near Tacoma to Whidbey Island -- and as far as 100 miles to the east near Ellensburg.

Officials at the National Weather Service have ruled out any weather-related causes, and duty officers at the Federal Aviation Administration and the Whidbey Island Naval Air Station say they know of no civilian or military airplane problems. An FAA duty officer says civilian pilots reported seeing the flash from Ellensburg, east of the Cascade Range. It also was seen by Petty Officer Andrew Davis at the naval air station near Oak Harbor. He says he also heard a loud bang and adds that he and others at the base thought it might have been a meteorite.

AstroMart Editor's note: Several local establishments - a lot of Casinos, actually - submitted security cam clips of their parking lots to local TV stations indicating that something flashed brightly enough to simulate near-daylight for a couple of seconds and, in some, you can actually follow the quickly moving shadows and reflections as it passed. I live near Seattle and was on my back deck imaging that night but must have stepped inside to refresh my coffee mug during the event. I do recall coming out and looking up and to the South at around that time and seeing what appeared to be a 10 degree long, 1/2 degree wide contrail (condensate trail left by high altitude jets, common here in the Seattle area). I only remember noticing that it was an unusually luminous powder blue and eye-catching but that was all I saw.

Neither my imaging nor my meteor observing was very successful that night. In lieu of a shot of the meteor, I offer up my humble C8/webcam image of Jupiter from that night, ravaged by low elevation, my neighbor's roof, and typical Seattle area seeing.

Local reports of the meteor "event" are still coming in. Some of them, especially within the local astronomy clubs, are very interesting and indicate a general North-South path, multple colors, a sonic-boom effect, close to but not quite daylight illumination, and an appearance of "breaking up" at one point.

If anything conclusive breaks locally, I'll be sure to report it. -Ed.