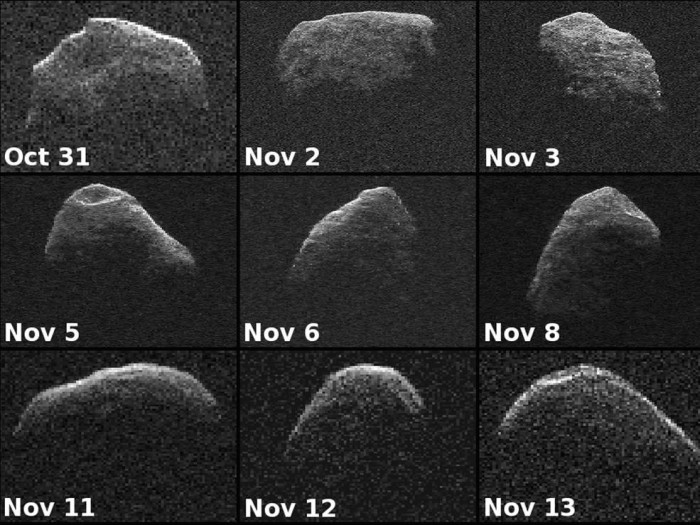 Nine radar images of near-Earth asteroid Apophis obtained between Oct. 31,2012 and Nov. 13, 2012. NASA scientists at the Jet Propulsion Laboratory (JPL) in Pasadena, California, effectively have ruled out the possibility that asteroid Apophis will impact Earth during close flybys in 2036 and another in 2068. Discovered in 2004, the asteroid, which is the size of three-and-a-half football fields, gathered the immediate attention of space scientists and the media when initial calculations of its orbit indicated a 2.7 percent probability of an Earth impact during a close flyby in 2029. (Image Credit: NASA, JPL-CalTech)

After its discovery in 2004, asteroid 99942 Apophis had been identified as one of the most hazardous asteroids that could impact Earth. But that impact assessment changed as astronomers tracked Apophis and its orbit became better determined.

Now, the results from a new radar observation campaign combined with precise orbit analysis have helped astronomers conclude that there is no risk of Apophis impacting our planet for at least a century.

Estimated to be about 1,100 feet (340 meters) across, Apophis quickly gained notoriety as an asteroid that could pose a serious threat to Earth when astronomers predicted that it would come uncomfortably close in 2029. Thanks to additional observations of the near-Earth object (NEO), the risk of an impact in 2029 was later ruled out, as was the potential impact risk posed by another close approach in 2036. Until this month, however, a small chance of impact in 2068 still remained.

When Apophis made a distant flyby of Earth around March 5,2021, astronomers took the opportunity to use powerful radar observations to refine the estimate of its orbit around the Sun with extreme precision, enabling them to confidently rule out any impact risk in 2068 and long after.

“A 2068 impact is not in the realm of possibility anymore, and our calculations don’t show any impact risk for at least the next 100 years,” said Davide Farnocchia of NASA’s Center for Near-Earth Object Studies (CNEOS), which is managed by NASA’s Jet Propulsion Laboratory in Southern California. “With the support of recent optical observations and additional radar observations, the uncertainty in Apophis’ orbit has collapsed from hundreds of kilometers to just a handful of kilometers when projected to 2029. This greatly improved knowledge of its position in 2029 provides more certainty of its future motion, so we can now remove Apophis from the risk list.”

Farnocchia was referring to the Sentry Impact Risk Table. Maintained by CNEOS, the table keeps tabs on the few asteroids whose orbits take them so close to Earth that an impact can’t be ruled out. With the recent findings, the Risk Table no longer includes Apophis.

To arrive at the latest Apophis calculations, astronomers turned to the 70-meter (230-foot) radio antenna at the Deep Space Network’s Goldstone Deep Space Communications Complex near Barstow, California, to precisely track Apophis’ motion. “Although Apophis made a recent close approach with Earth, it was still nearly 10.6 million miles [17 million kilometers] away. Even so, we were able to acquire incredibly precise information about its distance to an accuracy of about 150 meters [490 feet],” said JPL scientist Marina Brozovic, who led the radar campaign. “This campaign not only helped us rule out any impact risk, it set us up for a wonderful science opportunity.”

Goldstone also worked in a collaboration with the 100-meter (330-foot) Green Bank Telescope in West Virginia in order to enable imaging of Apophis; Goldstone was transmitting while Green Bank was receiving – a “bistatic” experiment that doubled the strength of the received signal.

Although the radar imagery of Apophis appears pixelated, the images have a resolution of 38.75 meters (127 feet) per pixel, “which is a remarkable resolution, considering the asteroid was 17 million kilometers away, or about 44 times the Earth-Moon distance,” added Brozovic. “If we had binoculars as powerful as this radar, we would be able to sit in Los Angeles and read a dinner menu at a restaurant in New York.”

As the radar team further analyzes their data, they also hope to learn more about the asteroid’s shape. Previous radar observations have suggested that Apophis has a “bilobed,” or peanutlike, appearance. This is a relatively common shape among the near-Earth asteroids larger than 660 feet (200 meters) in diameter; at least one in six have two lobes.

Astronomers are also working to develop a better understanding of the asteroid’s rotation rate and the axis it spins around (known as its spin state). That knowledge will enable them to determine the orientation the asteroid will have with Earth as it encounters our planet’s gravitational field in 2029, which could change that spin state and even cause “asteroid quakes.”

On April 13, 2029, the asteroid Apophis will pass less than 20,000 miles (32,000 kilometers) from our planet’s surface – closer than the distance of geosynchronous satellites. During that 2029 close approach, Apophis will be visible to observers on the ground in the Eastern Hemisphere without the aid of a telescope or binoculars. It’s also an unprecedented opportunity for astronomers to get a close-up view of a solar system relic that is now just a scientific curiosity and not an immediate hazard to our planet.

“When I started working with asteroids after college, Apophis was the poster child for hazardous asteroids,” said Farnocchia. “There’s a certain sense of satisfaction to see it removed from the risk list, and we’re looking forward to the science we might uncover during its close approach in 2029.”

Asteroid 99942 Apophis is a near-Earth asteroid more than 1100 feet (over 340 meters) in size that will harmlessly pass close to Earth on April 13, 2029. When it was discovered in 2004, the asteroid caused a stir because initial calculations indicated a small possibility it would impact Earth in 2029.

After searching through some older astronomical images, scientists ruled out the possibility of a 2029 impact. It’s now predicted the asteroid will safely pass about 19,800 miles (31,900 kilometers) from our planet’s surface. While that’s a safe distance, it’s close enough that the asteroid will come between Earth and our Moon, which is about 238,855 miles (384,400 kilometers) away. It’s also within the distance that some spacecraft orbit Earth.

It’s rare for an asteroid of this size to pass so close to Earth, although smaller asteroids, in the range of 16 to 33 feet (5 to 10 meters), in size have been observed passing by at similar distances.

“The Apophis close approach in 2029 will be an incredible opportunity for science,” said Marina Brozović, a radar scientist at NASA’s Jet Propulsion Laboratory in Pasadena, California, who works on radar observations of near-Earth objects (NEOs). “We’ll observe the asteroid with both optical and radar telescopes. With radar observations, we might be able to see surface details that are only a few meters in size.”

During its 2029 flyby, Apophis will first become visible to the naked eye in the night sky over the southern hemisphere and will look like a speck of light moving from east to west over Australia. It will be mid-morning on the U.S. East Coast when Apophis is above Australia.

Apophis will then cross above the Indian Ocean, and continuing west, it will cross the equator over Africa.

At its closest approach to Earth, just before 6 p.m. EDT, April 13, 2029, Apophis will be over the Atlantic Ocean. It will move so fast that it will cross the Atlantic in just an hour. By 7 p.m. EDT, the asteroid will have crossed over the United States.

As it passes by Earth, it will get brighter and faster. At one point it will appear to travel more than the width of the full Moon within a minute and it will get as bright as the stars in the Little Dipper.

Apophis is named for the demon serpent who personified evil and chaos in ancient Egyptian mythology.

Apophis was discovered on June 19, 2004, by astronomers Roy Tucker, David Tholen and Fabrizio Bernardi at the Kitt Peak National Observatory in Tucson, Arizona. They were only able to observe the asteroid for two days because of technical and weather problems. Fortunately, a team at the Siding Spring Observatory in Australia spotted the asteroid again later in the same year.

Since its discovery, optical and radar telescopes track Apophis as it orbits the Sun and scientists are confident they know its future trajectory. Current calculations show that Apophis still has a very small chance of impacting Earth — less than 1 in 100,000 many decades from now.

The most important observations of Apophis will come during its close Earth flyby in 2029. Scientists around the world will study the asteroid’s size, shape, composition and possibly even its interior.

Apophis is a 1,120-foot-wide (340-meter-wide) asteroid. That’s about the size of three-and-a-half football fields.

At its farthest, Apophis can reach a distance of about 2 astronomical units (One astronomical unit, abbreviated as AU, is the distance from the Sun to Earth.) away from Earth. It’s expected to safely pass close to Earth — within 19,794 miles (31,860 kilometers) from our planet’s surface — on April 13, 2029. This is the closest approach by an asteroid of this size that scientists have known about in advance.

The orbit of Apophis crosses the orbit of Earth. It completes an orbit around the Sun in a bit less than one Earth year (about 0.9 years). This places it in the group of Earth-crossing asteroids known as "Atens," whose orbits are smaller in width than the width of Earth's orbit, or 1 AU. As a result of its close encounter with Earth in 2029, the asteroid's orbit will be widened to become slightly larger than the width of Earth's orbit. At this point it will be reclassified from the Aten group to the "Apollo" group (the group of Earth-crossing asteroids with orbits wider than 1 AU).

The asteroid “wobbles” as it spins about its short axis, typically rotating about once every 30 hours. Sometimes, there is also a “rocking” motion back and forth about its long axis, as well, which occurs over a longer period than the short axis wobble. (The technical term for this rocking motion is “non-principal axis rotation.”)

Apophis is classified as an S-type, or stony-type asteroid, made up of silicate (or rocky) materials and a mixture of metallic nickel and iron. Radar images suggest it is elongated and possibly has two lobes, making it look something like a peanut. Much more will be learned about this asteroid's structure following its close flyby of Earth in 2029.

Like all asteroids, Apophis is a remnant from the early formation of our solar system about 4.6 billion years ago. It originated in the main asteroid belt between Mars and Jupiter. Over millions of years, its orbit was changed primarily by the gravitational influence of large planets like Jupiter so that it now orbits the Sun closer to Earth. As a result, Apophis is classified as a near-Earth asteroid, as opposed to a main-belt asteroid.

There are no high-resolution images of the surface of asteroid Apophis, but it is likely similar to surfaces of other stony-type asteroids like Itokawa, the first asteroid from which samples were captured and brought to Earth for analysis.