NASA’s Artemis Program – Gateway to the Moon… Steppingstone to Mars 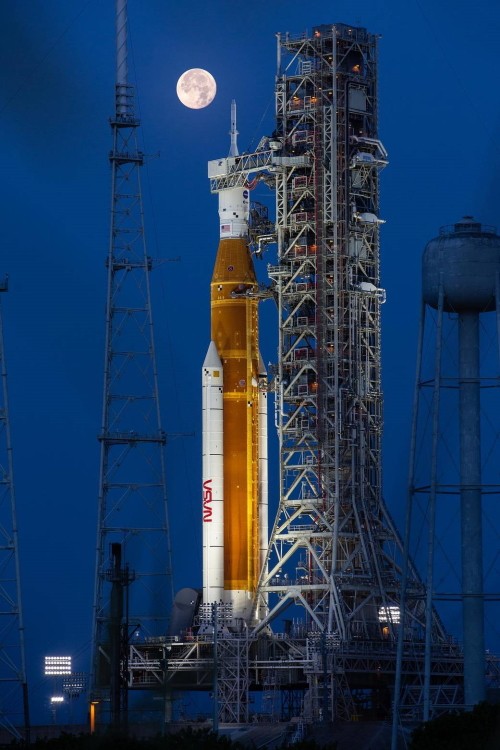 Artemis is the first step in the next era of human exploration. Together with commercial and international partners, NASA will establish a sustainable presence on the Moon to prepare for missions to Mars. In this image, the full Moon is in view from Launch Complex 39B at NASA’s Kennedy Space Center in Florida on June 14, 2022. The Artemis 1 Space Launch System (SLS) and Orion spacecraft, atop the mobile launcher, are being prepared for a wet dress rehearsal to practice timelines and procedures for launch. The wet rehearsal was completed successfully on June 21st. The first in an increasingly complex series of missions, Artemis 1 will test SLS and Orion as an integrated system prior to crewed flights to the Moon. Through Artemis, NASA will pave the way for a long-term lunar presence and use of the Moon as a steppingstone on the way to Mars. (Image Credit: NASA, Cory Huston)

NASA’s Artemis Program – Gateway to the Moon… Steppingstone to Mars

Artemis 1, planned for liftoff later this year, will be the first integrated test of NASA’s deep space exploration systems: the Orion spacecraft, Space Launch System (SLS) rocket, and the ground systems at Kennedy Space Center in Cape Canaveral, Florida. The first in a series of increasingly complex missions, Artemis 1 will be an uncrewed flight test that will provide a foundation for human deep space exploration, and demonstrate our commitment and capability to extend human existence to the Moon and beyond.

During this flight, the spacecraft will launch on the most powerful rocket in the world and fly farther than any spacecraft built for humans has ever flown. It will travel 280,000 miles from Earth, thousands of miles beyond the Moon over the course of about a four to six-week mission. Orion will stay in space longer than any ship for astronauts has done without docking to a space station and return home faster and hotter than ever before.

“This is a mission that truly will do what hasn’t been done and learn what isn’t known,” said Mike Sarafin, Artemis I mission manager at NASA Headquarters in Washington. “It will blaze a trail that people will follow on the next Orion flight, pushing the edges of the envelope to prepare for that mission.”

SLS and Orion will blast off from Launch Complex 39B at NASA’s modernized spaceport at Kennedy Space Center in Florida. The SLS rocket is designed for missions beyond low-Earth orbit carrying crew or cargo to the Moon and beyond, and will produce 8.8 million pounds of thrust during liftoff and ascent to loft a vehicle weighing nearly six million pounds to orbit. Propelled by a pair of five segment boosters and four RS-25 engines, the rocket will reach the period of greatest atmospheric force within ninety seconds. After jettisoning the boosters, service module panels, and launch abort system, the core stage engines will shut down and the core stage will separate from the spacecraft.

As the spacecraft makes an orbit of Earth, it will deploy its solar arrays and the Interim Cryogenic Propulsion Stage (ICPS) will give Orion the big push needed to leave Earth’s orbit and travel toward the Moon. From there, Orion will separate from the ICPS within about two hours after launch. The ICPS will then deploy a number of small satellites, known as CubeSats, to perform several experiments and technology demonstrations.

On to the Moon

As Orion continues on its path from Earth orbit to the Moon, it will be propelled by a service module provided by the European Space Agency, which will supply the spacecraft’s main propulsion system and power (as well as house air and water for astronauts on future missions). Orion will pass through the Van Allen radiation belts, fly past the Global Positioning System (GPS) satellite constellation and above communication satellites in Earth orbit. To talk with mission control in Houston, Orion will switch from NASA’s Tracking and Data Relay Satellites system and communicate through the Deep Space Network. From here, Orion will continue to demonstrate its unique design to navigate, communicate, and operate in a deep space environment.

The outbound trip to the Moon will take several days, during which time engineers will evaluate the spacecraft’s systems and, as needed, correct its trajectory. Orion will fly about 62 miles (100 km) above the surface of the Moon, and then use the Moon’s gravitational force to propel Orion into a new deep retrograde, or opposite, orbit about 40,000 miles (70,000 km) from the Moon.

The spacecraft will stay in that orbit for approximately six days to collect data and allow mission controllers to assess the performance of the spacecraft. During this period, Orion will travel in a direction around the Moon retrograde from the direction the Moon travels around Earth.

For its return trip to Earth, Orion will do another close flyby that takes the spacecraft within about 60 miles of the Moon’s surface. The spacecraft will use another precisely timed engine firing of the European-provided service module in conjunction with the Moon’s gravity to accelerate back toward Earth. This maneuver will set the spacecraft on its trajectory back toward Earth to enter our planet’s atmosphere traveling at 25,000 mph (11 kilometers per second), producing temperatures of approximately 5000 degrees Fahrenheit (2760 degrees Celsius) – faster and hotter than Orion experienced during its 2014 flight test.

After about three weeks and a total distance traveled exceeding 1.3 million miles, the mission will end with a test of Orion’s capability to return safely to the Earth as the spacecraft makes a precision landing within eyesight of the recovery ship off the coast of Baja, California. Following splashdown, Orion will remain powered for a period of time as divers from the U.S. Navy and operations teams from NASA’s Exploration Ground Systems approach in small boats from the waiting recovery ship. The divers will briefly inspect the spacecraft for hazards and hook up tending and tow lines, and then engineers will tow the capsule into the well-deck of the recovery ship to bring the spacecraft home.

With this first exploration mission, NASA is leading the next steps of human exploration into deep space where astronauts will build and begin testing the systems near the Moon needed for lunar surface missions and exploration to other destinations farther from Earth, including Mars. The second flight will take crew on a different trajectory and test Orion’s critical systems with humans aboard. The SLS rocket will evolve from an initial configuration capable of sending more than 26 metric tons to the Moon, to a final configuration that can send at least 45 metric tons.  Together, Orion, SLS, and the ground systems at Kennedy will be able to meet the most challenging crew and cargo mission needs in deep space.

Future exploration missions with crew aboard Orion will assemble and dock with a Gateway. NASA and its partners will use the Gateway for deep-space operations including missions to and on the Moon with decreasing reliance on the Earth. Using lunar orbit, we will gain the experience necessary to extend human exploration farther into the solar system than ever before.