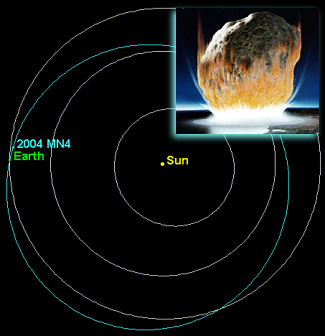 A recently rediscovered 400-meter Near-Earth Asteroid (NEA) is predicted to pass near the Earth on 13 April 2029. The flyby distance is uncertain and an Earth impact cannot yet be ruled out. The odds of impact, presently around 1 in 300, are unusual enough to merit special monitoring by astronomers, but should not be of public concern. These odds are likely to change on a day-to-day basis as new data are received. In all likelihood, the possibility of impact will eventually be eliminated as the asteroid continues to be tracked by astronomers around the world.

This object is the first to reach a level 2 (out of 10) on the Torino Scale. According to the Torino Scale, a rating of 2 indicates "a discovery, which may become routine with expanded searches, of an object making a somewhat close but not highly unusual pass near the Earth. While meriting attention by astronomers, there is no cause for public attention or public concern as an actual collision is very unlikely. New telescopic observations very likely will lead to re-assignment to Level 0 [no hazard]." This asteroid should be easily observable throughout the coming months.

December 24 Update: 2004 MN4 is now being tracked very carefully by many astronomers around the world, and we continue to update our risk analysis for this object. Today's impact monitoring results indicate that the impact probability for April 13, 2029 has risen to about 1.6%, which for an object of this size corresponds to a rating of 4 on the ten-point Torino Scale. Nevertheless, the odds against impact are still high, about 60 to 1, meaning that there is a better than 98% chance that new data in the coming days, weeks, and months will rule out any possibility of impact in 2029.