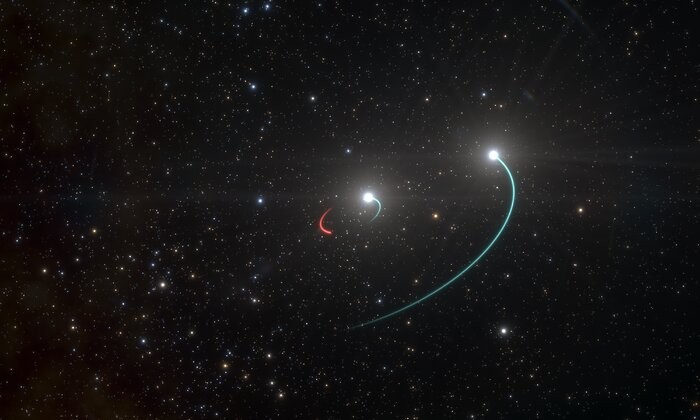 This artist’s impression shows the orbits of the objects in the HR 6819 triple system. This system is made up of an inner binary with one star (orbit in blue) and a newly discovered black hole (orbit in red), as well as a third object, another star, in a wider orbit (also in blue). The team originally believed there were only two objects, the two stars, in the system. However, as they analyzed their observations, they were stunned when they revealed a third, previously undiscovered body in HR 6819: a black hole, the closest ever found to Earth. The black hole is invisible, but it makes its presence known by its gravitational pull, which forces the luminous inner star into an orbit. The objects in this inner pair have roughly the same mass and circular orbits. The observations, with the FEROS spectrograph on the 2.2-metre telescope at ESO’s La Silla, showed that the inner visible star orbits the black hole every 40 days, while the second star is at a large distance from this inner pair. (Image Credit: ESO, L. Calcada)

A team of astronomers from the European Southern Observatory (ESO) and other institutes have discovered a black hole lying just 1000 lightyears from Earth. The black hole is closer to our Solar System than any other found to date and forms part of a triple system that can be seen with the naked eye. The team found evidence for the invisible object by tracking its two companion stars using the MPG/ESO 2.2-metre telescope at ESO’s La Silla Observatory in Chile. The astronomers say this system could just be the tip of the iceberg, as many more similar black holes could be found in the future.

"We were totally surprised when we realised that this is the first stellar system with a black hole that can be seen with the unaided eye,” says Petr Hadrava, Emeritus Scientist at the Academy of Sciences of the Czech Republic in Prague and co-author of the research. Located in the constellation of Telescopium, the system is so close to us that its stars can be viewed from the southern hemisphere on a dark, clear night without binoculars or a telescope. “This system contains the nearest black hole to Earth that we know of,” says ESO scientist Thomas Rivinius, who led the study.

The team originally observed the system, called HR 6819, as part of a study of double-star systems. However, as they analyzed their observations, they were stunned when they revealed a third, previously undiscovered body in HR 6819: a black hole. The observations with the FEROS spectrograph on the MPG/ESO 2.2-metre telescope at La Silla showed that one of the two visible stars orbits an unseen object every 40 days, while the second star is at a large distance from this inner pair.

Dietrich Baade, Emeritus Astronomer at ESO in Garching, Bavaria, and co-author of the study, says: “The observations needed to determine the period of 40 days had to be spread over several months. This was only possible thanks to ESO’s pioneering service-observing scheme under which observations are made by ESO staff on behalf of the scientists needing them.”

The hidden black hole in HR 6819 is one of the very first stellar-mass black holes found that do not interact violently with their environment and, therefore, appear truly black. But the team could spot its presence and calculate its mass by studying the orbit of the star in the inner pair. “An invisible object with a mass at least 4 times that of the Sun can only be a black hole,” concludes Rivinius, who is based in Chile.

Astronomers have spotted only a couple of dozen black holes in our galaxy to date, nearly all of which strongly interact with their environment and make their presence known by releasing powerful X-rays in this interaction. But scientists estimate that, over the Milky Way’s lifetime, many more stars collapsed into black holes as they ended their lives. The discovery of a silent, invisible black hole in HR 6819 provides clues about where the many hidden black holes in the Milky Way might be. “There must be hundreds of millions of black holes out there, but we know about only very few. Knowing what to look for should put us in a better position to find them,” says Rivinius. Baade adds that finding a black hole in a triple system so close by indicates that we are seeing just “the tip of an exciting iceberg.”

Already, astronomers believe their discovery could shine some light on a second system. “We realised that another system, called LB-1, may also be such a triple, though we'd need more observations to say for sure,” says Marianne Heida, a postdoctoral fellow at ESO and co-author of the paper. “LB-1 is a bit further away from Earth but still pretty close in astronomical terms, so that means that probably many more of these systems exist. By finding and studying them we can learn a lot about the formation and evolution of those rare stars that begin their lives with more than about 8 times the mass of the Sun and end them in a supernova explosion that leaves behind a black hole.”

The discoveries of these triple systems with an inner pair and a distant star could also provide clues about the violent cosmic mergers that release gravitational waves powerful enough to be detected on Earth. Some astronomers believe that the mergers can happen in systems with a similar configuration to HR 6819 or LB-1, but where the inner pair is made up of two black holes or of a black hole and a neutron star. The distant outer object can gravitationally impact the inner pair in such a way that it triggers a merger and the release of gravitational waves. Although HR 6819 and LB-1 have only one black hole and no neutron stars, these systems could help scientists understand how stellar collisions can happen in triple star systems.