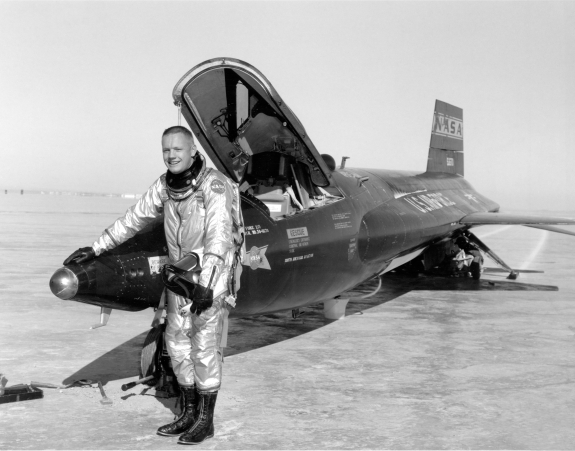 Statement from the Armstrong family:

"We are heartbroken to share the news that Neil Armstrong has passed away following complications resulting from cardiovascular procedures."

"Neil was our loving husband, father, grandfather, brother, and friend."

"Neil Armstrong was also a reluctant American hero who always believed he was just doing his job. He served his Nation proudly, as a navy fighter pilot, test pilot, and astronaut. He also found success back home in his native Ohio in business and academia, and became a community leader in Cincinnati."

"He remained an advocate of aviation and exploration throughout his life and never lost his boyhood wonder of these pursuits."

"As much as Neil cherished his privacy, he always appreciated the expressions of good will from people around the world and from all walks of life."

"While we mourn the loss of a very good man, we also celebrate his remarkable life and hope that it serves as an example to young people around the world to work hard to make their dreams come true, to be willing to explore and push the limits, and to selflessly serve a cause greater than themselves."

"For those who may ask what they can do to honor Neil, we have a simple request. Honor his example of service, accomplishment and modesty, and the next time you walk outside on a clear night and see the moon smiling down at you, think of Neil Armstrong and give him a wink."

"I am very saddened to learn of the passing of Neil Armstrong today. Neil and I trained together as technical partners but were also good friends who will always be connected through our participation in the Apollo 11 mission. Whenever I look at the moon it reminds me of the moment over four decades ago when I realized that even though we were farther away from earth than two humans had ever been, we were not alone. Virtually the entire world took that memorable journey with us. I know I am joined by millions of others in mourning the passing of a true American hero and the best pilot I ever knew. My friend Neil took the small step but giant leap that changed the world and will forever be remembered as a landmark moment in human history. I had truly hoped that in 2019, we would be standing together along with our colleague Mike Collins to commemorate the 50th Anniversary of our moon landing. Regrettably, this is not to be. Neil will most certainly be there with us in spirit."

"On behalf of the Aldrin family, we extend our deepest condolences to Carol and the entire Armstrong family. I will miss my friend Neil as I know our fellow citizens and people around world will miss this foremost aviation and space pioneer."

"Neil was indeed the greatest. His humility and reluctance to stand in the spotlight as the first human to set foot on the moon are well known and respected. But mention flying airplanes, and in particular flying the X-15, and he would light up, his eyes would twinkle, and you could barely get a word in edgewise – nor would you want to. Neil was a great American, a great test pilot, a great engineer, but most importantly, a great friend. We'll miss him, but we're so thankful we had the opportunity to know and fly with him. Our thoughts and prayers are with Carol and his family."

"On behalf of the entire NASA family, I would like to express my deepest condolences to Carol and the rest of the Armstrong family on the passing of Neil Armstrong. As long as there are history books, Neil Armstrong will be included in them, remembered for taking humankind's first small step on a world beyond our own."

"Besides being one of America's greatest explorers, Neil carried himself with a grace and humility that was an example to us all. When President Kennedy challenged the nation to send a human to the moon, Neil Armstrong accepted without reservation."

"As we enter this next era of space exploration, we do so standing on the shoulders of Neil Armstrong. We mourn the passing of a friend, fellow astronaut and true American hero."

One Small Step, One Giant Leap - Restored footage of Neil Armstrong's first steps on the lunar surface during the Apollo 11 mission in July 1969.

Neil Armstrong On 'The Space Race'