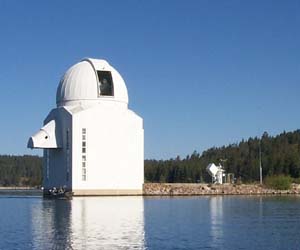 (Article by Andrew Edwards, Inland Valley Daily Bulletin 03/13/2007) To the naked eye, the star that sustains life on our planet appears as a golden orb in midday and colors the clouds with a rich amber glow as it later sinks below the horizon. But images processed with the aid of a solar telescope, like one that has been used by astronomers at the Big Bear Solar Observatory, can show the sun in a much different light.

Such technology can produce pictures of a chaotic black-and-white whorl of energy where the heat and twisting of the sun's magnetic field is so intense that, by comparison, the explosion of a hydrogen bomb seems about as powerful as a firecracker.

The Big Bear Observatory, affiliated with the New Jersey Institute of Technology, looks a little bit like a white chess piece over the waters of Big Bear Lake and is in a period of transition. But the kind of change happening there is the kind that many scientists would love.

By the end of summer, a new telescope is expected to be installed at the observatory. Director Philip Goode is counting on the new equipment to give astronomers the kind of close look at the sun that has not been possible before.

The telescope, with a 1.6-meter aperture, is designed to collect so much sunlight that, in Goode's words, it will be large enough to "address fundamental questions of the sun." For example, Goode said, studying the sun's magnetic field can uncover new knowledge about a phenomenon called coronal mass ejections, which Goode described as "short-term storms that impact us here on Earth."

Telescope project director Roy Coulter noted the device's primary mirror will be designed so the glass can be bent to change focus.

Astronomers will be able to take observations with the $5 million telescope as soon as it is installed in the lakefront observatory, Coulter said. But he expects about one year of work will be needed to fine-tune the device and to learn to use it to its fullest potential.

Goode, who grew up near San Francisco, said he built his first telescope when he was 10. He explored theoretical physics as a student and completed his undergraduate work at UC Berkeley before earning his doctorate at Rutgers University in 1969.

As a student, Goode's first interest was in high-energy physics, the branch of science that uses massive particle accelerators to study matter at the subatomic level. The Department of Energy's Office of High Energy Physics describes the discipline as the study of "fundamental interactions of energy, matter, time and space."

But, as it happened, Goode found he preferred to work in an observatory rather than in a huge physics research facility.

"I realized I was right when I was 10," he said. "Everybody knows that understanding the sun is important. It affects our daily life. It's our star."