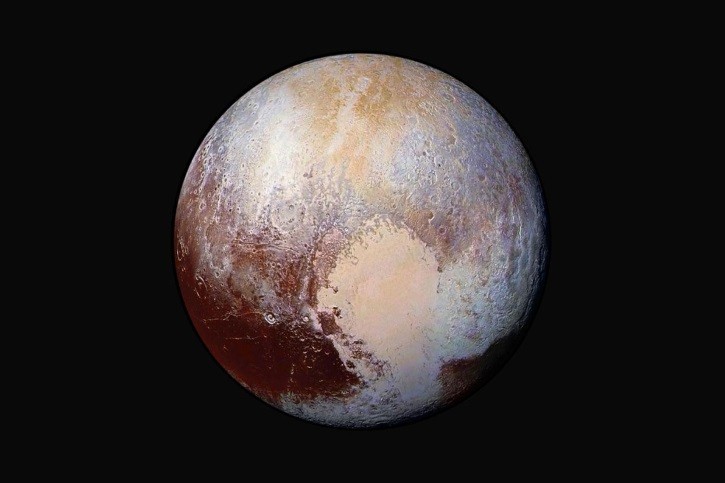 Decades after Clyde Tombaugh's discovery of Pluto, the New Horizons spacecraft flew past the planet on July 14, 2015. Four images from the spacecraft's Long-Range Reconnaissance Imager (LORRI) were combined with color data from its Ralph instrument to create this iconic, enhanced color global view of Pluto. The flyby revealed a geological complexity that was unexpected for a small planet. (Image Credit: NASA, Johns Hopkins University Applied Physics Laboratory, Southwest Research Institute)

Ninety years ago this month, Clyde Tombaugh, a young astronomer working at Lowell Observatory in Flagstaff, Arizona, discovered Pluto. In doing so he unknowingly opened the door to the vast "third zone" of the solar system we now know as the Kuiper Belt, containing countless planetesimals and dwarf planets—the third class of planets in our solar system.

Lowell Observatory's namesake, Percival Lowell, first proposed the existence of a "Planet X" somewhere beyond the orbit of Neptune. Unable to find it before his death in 1916, the search for Planet X stalled for nearly a decade until renewed when Tombaugh was hired in 1929. Tombaugh found the object on February 18, 1930, at the age of 24, using a Zeiss blink comparator, a device that allowed him to spot moving objects against the background star fields he had photographed.

"What Tombaugh didn't know then was that Planet X would launch the era of exploration in the third zone of the solar system," said Thomas Zurbuchen, associate administrator for NASA's Science Mission Directorate. "Science builds on science, and this discovery helped pave the way for New Horizons' exploration of this uncharted region."

Although he died in 1997, Tombaugh's ashes were aboard NASA's New Horizons spacecraft when it launched from Cape Canaveral Air Force Station, Florida, in January 2006. Those ashes, carried in a small canister on the spacecraft, traveled with New Horizons on a nine-year, three-billion-mile journey to Pluto to make the first exploration of Tombaugh's planet.

The spacecraft flew past Pluto and its five moons on July 14, 2015, coming to within 7,800 miles (12,500 kilometers) of the surface and delivering the now iconic images of Pluto and its heart, as well as all five of its moons: Charon, Nix, Hydra, Styx and Kerberos. The flyby revolutionized humankind's understanding of the Pluto system and dwarf planets. From the variety in its geological landforms, to its complex atmosphere, to its intriguing moons, Pluto showed a level of physical diversity and complexity that few expected to find.

Once thought by some to be only an icy rock, New Horizons discovered that Pluto is actually geologically active. From strange, bladed methane mountains to nitrogen glaciers, to ice volcanoes and the now suspected presence of a liquid water ocean inside the planet, Pluto has literally caused planetary scientists to rethink how complex and active small planets can be. Pluto also has a brilliant blue nitrogen atmosphere, replete with hazes stretching half a million meters into its sky and possible ground fogs and clouds.

Following the success of the Pluto flyby, NASA extended the New Horizons mission to fly past a small Kuiper Belt object a billion miles beyond Pluto. On Jan. 1, 2019, New Horizons brought that ancient body, Arrokoth, into focus and, in doing so, revealed how planetesimals — the building blocks of planets like Pluto — were formed.

"Looking back, Tombaugh's discovery was so much more than just the discovery of the ninth planet," said New Horizons Principal Investigator Alan Stern, of the Southwest Research Institute. "It was the harbinger of a whole new region of the solar system and two different and completely new types of bodies — dwarf planets and Kuiper Belt objects. I only wish that Clyde had lived to see all that New Horizons discovered and how stunningly beautiful Pluto is."

New Horizons has now sent about 80 percent of the data stored on its recorders back to Earth; transmission of the remainder will be complete by October. To say that New Horizons shook the foundation of planetary science is an understatement – the discoveries already culled from the pictures and compositional and space environment readings have not only introduced us to the Pluto system, but hint at what awaits as scientists examine other worlds in the Kuiper Belt.

New Horizons Principal Investigator Alan Stern rounds out the mission's most surprising and amazing findings from Pluto so far.

With Pluto way back in New Horizons’ rearview mirror, the team is already focused on the next challenge – a close flyby of 2014 MU69, an ancient Kuiper Belt object that is much smaller than Pluto but a billion miles farther out.