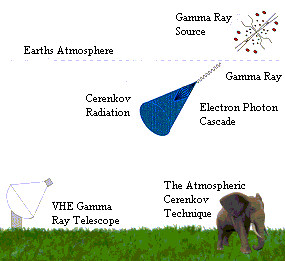 ... The astronomers studied the remnant of a supernova that exploded some 1,000 years ago, leaving behind an expanding shell of debris which, seen from the Earth, is twice the diameter of the Moon. The resulting image helps to solve a mystery that has been puzzling scientists for almost 100 years - the origin of cosmic rays. Cosmic rays are extremely energetic particles that continually bombard the Earth, thousands of them passing through our bodies every day. The production of gamma rays in this supernova shock wave tells us that it is acting like a giant particle accelerator in space, and thus a likely source of the cosmic rays in our galaxy.

Dr Paula Chadwick of the University of Durham said "This picture really is a big step forward for gamma-ray astronomy and the supernova remnant is a fascinating object. If you had gamma-ray eyes and were in the Southern Hemisphere, you could see a large, brightly glowing ring in the sky every night."

Professor Ian Halliday, CEO of PPARC which funds UK participation in HESS said "These results provide the first unequivocal proof that supernovae are capable of producing large quantities of galactic cosmic rays - something we have long suspected, but never been able to confirm."

Gamma rays are the most penetrating form of radiation we know, around a billion times more energetic than the X-rays produced by a hospital X-ray machine. This makes it very difficult to use them to create an image - they just pass straight through any surface which we might use to reflect them, for instance. However, luckily for life on Earth, gamma rays from objects in outer space are stopped by the atmosphere; when this happens, a faint flash of blue light is produced, lasting for a few billionths of a second. The astronomers used images of these flashes of light, called Cherenkov radiation, to make a gamma ray 'image' for the first time.

Over the last few years, the H.E.S.S. collaboration have been building a system of four telescopes in the Khomas Highland region of Namibia, to study very-high-energy gamma rays from cosmic particle accelerators. The telescopes, known as Cherenkov telescopes, image the light created when high-energy cosmic gamma rays are absorbed in the atmosphere, and have opened a new energy domain for astronomy. The H.E.S.S. telescopes each feature mirrors of area 107 square metres, and are equipped with highly sensitive and very fast 960-pixel light detectors in the focal planes. Construction of the telescope system started in 2001; the fourth telescope was commissioned in December 2003. Observations were being made even while the system was being built, first using a single telescope, then with two and three telescopes. While only the complete four-telescope system provides the full performance, the first H.E.S.S. telescope alone was already superior to any of the instruments operated previously in the southern hemisphere. Among the first targets to be observed with a two-telescope instrument was the Galactic Centre.