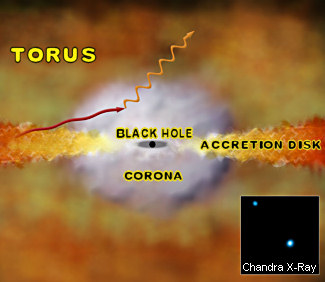 ... Astronomers Daniel Schwartz and Shanil Virani of the Harvard-Smithsonian Center for Astrophysics in Cambridge, MA observed the quasar, known as SDSSp J1306, which is 12.7 billion light-years away. Since the Universe is estimated to be 13.7 billion years old, we see the quasar as it was a billion years after the big bang. They found that the distribution of X-rays with energy, or X-ray spectrum, is indistinguishable from that of nearby, older quasars. Likewise, the relative brightness at optical and X-ray wavelengths of SDSSp J1306 was similar to that of the nearby group of quasars. Optical observations suggest that the mass of the black hole is about a billion solar masses.

Evidence of another early-epoch supermassive black hole was published previously by a team of scientists from the California Institute of Technology and the United Kingdom using the XMM-Newton X-ray satellite. They observed the quasar SDSSp J1030 at a distance of 12.8 billion light-years and found essentially the same result for the X-ray spectrum as the Smithsonian scientists found for SDSSp J1306. Chandra's precise location and spectrum for SDSSp J1306 with nearly the same properties eliminate any lingering uncertainty that precocious supermassive black holes exist.

“These two results seem to indicate that the way supermassive black holes produce X-rays has remained essentially the same from a very early date in the Universe,” said Schwartz. “This implies that the central black hole engine in a massive galaxy was formed very soon after the big bang.”

There is general agreement among astronomers that X-radiation from the vicinity of supermassive black holes is produced as gas is pulled toward a black hole, and heated to temperatures ranging from millions to billions of degrees. Most of the infalling gas is concentrated in a rapidly rotating disk, the inner part of which has a hot atmosphere or corona where temperatures can climb to billions of degrees.

Although the precise geometry and details of the X-ray production are not known, observations of numerous quasars, or supermassive black holes, have shown that many of them have very similar X-ray spectra, especially at high X-ray energies. This suggests that the basic geometry and mechanism are the same for these objects.

The remarkable similarity of the X-ray spectra of the young supermassive black holes to those of much older ones means that the supermassive black holes and their accretion disks, were already in place less than a billion years after the big bang. One possibility is that millions of 100 solar-mass black holes formed from the collapse of massive stars in the young galaxy, and subsequently built up a billion solar-mass black hole in the center of the galaxy through mergers and accretion of gas.

To answer the question of how and when supermassive black holes were formed, astronomers plan to use the very deep Chandra exposures and other surveys to identify and study quasars at even earlier ages.


More on the above image

The X-rays observed by NASA's Chandra X-ray Observatory from the quasar SDSSp J1306 have taken 12.7 billion light-years to reach Earth, only a billion years less than the estimated 13.7 billion-year age of the Universe. Surprisingly, the distribution of X-rays with energy – the X-ray spectrum – in this early epoch quasar is indistinguishable from that of nearby, older quasars. The smaller object in the upper left of the image is a foreground galaxy.

The X-ray and optical properties of J1306 imply that a billion solar-mass black hole is the central engine behind its prodigious energy output, which exceeds that of 20 trillion suns. The Chandra results for J1306, and similar XMM-Newton data on another distant quasar provide evidence that supermassive black holes were fully grown less than a billion years after the big bang. This rapid growth is difficult to explain using most current models for the formation of supermassive black holes.

One possibility that might work is that millions of 100 solar mass black holes formed from the collapse of massive stars in the young galaxy. These black holes subsequently built up a billion solar-mass black hole in the center of the galaxy through mergers and accumulations of gas.

The precise geometry and details of X-ray producing region around a supermassive black hole are not known. However, it is known that the high-energy X-ray spectra of numerous quasars having a wide range of ages are very similar, so the conditions must be similar.

The accompanying illustration shows how these high-energy X-rays might be produced. Material from a large torus of gas and dust in the center of a galaxy is pulled toward a black hole. Most of the infalling gas is concentrated in a rapidly rotating disk, and a hot atmosphere or corona where temperatures can climb to billions of degrees. Collisions of low-energy optical, ultraviolet and X-ray photons from the disk with the hot electrons in the corona boost the energy of the photons up to the high-energy X-ray range.