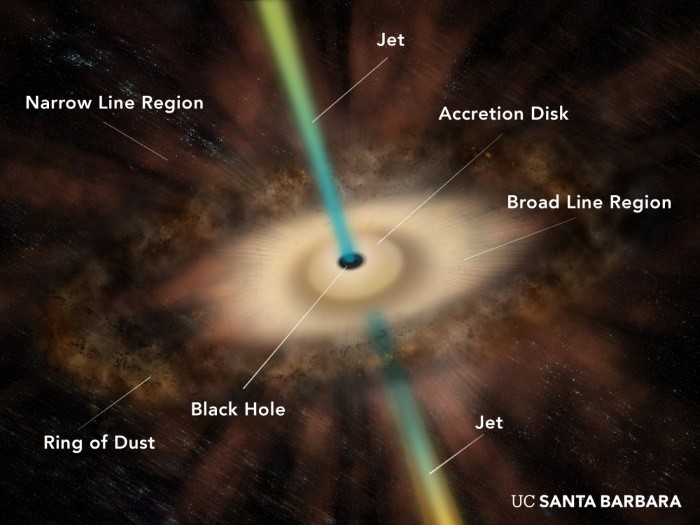 At the center of active galaxies are supermassive black holes of such tremendous brightness that they can outshine the rest of their galaxy by a factor of ten thousand -- that’s four orders of magnitude. Radiation ejected from these objects comes from an accretion disk of hot gas swirling around the black hole like water swirls around a drain. The gas becomes hotter and hotter as it swirls inward, so most of the emitted light comes from the inner parts of the accretion disk. Our understanding of these Active Galactic Nuclei (AGN) has progressed by leaps and bounds over the past several decades. Recently, debate has centered on the similarities and differences between some of these objects. Quasars, Blazars, Seyfert Galaxies, and Radio Galaxies are all examples of active galaxies. Active galaxies contain an accretion disk around a central black hole with two perpendicular jets. An active galaxy's appearance to an observer on Earth depends on the orientation of the accretion disk to the observer. Now, a team of researchers at UC - Santa Barbara has settled some important questions and exposed exciting new findings about one class of these cosmic monsters – The Seyfert Galaxies.