Space Laboratory on a Chip? 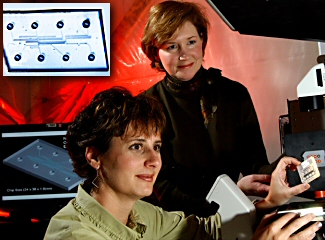 Imagine a huge laboratory filled with people and equipment shrinking to fit on a small chip — the size of a dime. Scientists on Earth use labs on chips for medical tests and other research. Marshall Center scientists are customizing these chips for use in space. One day they may be used in devices to detect contaminates, and rovers may use them to identify life on Mars.

With a microscope and computer monitor, researchers at NASA's Marshall Space Flight Center in Huntsville, Ala., watch fluorescent bacteria flow through tiny, fluid highways on a dime-sized lab on a chip.

Lab-on-a-chip technology allows chemical and biological processes -- previously conducted on large pieces of laboratory equipment -- to be performed on a small glass plate with fluid channels, known to scientists as microfluidic capillaries.

"We are studying how lab-on-a-chip technology can be used for new tools to detect bacteria and life forms on Earth and other planets and for protecting astronauts by monitoring crew health and detecting microbes and contaminants in spacecraft," explains Dr. Helen Cole, project manager for the Lab-on-a-Chip Applications Development program.

The chips are made with the same micro-fabrication technique used to print circuits on computer chips. Chemicals and fluid samples can be mixed, diluted, separated, and controlled using channels or electrical circuits embedded in the chip. On Earth, some basic lab-on-a-chip technology approaches are being used for commercial, medical diagnostic applications, such as an in-office test for strep throat, or modern in-home pregnancy tests. These applications conduct a test and yield results in a short time, with a hand-held portable device containing a simple chip design.

"NASA requires complex lab-on-a-chip technology, so scientists can conduct multiple chemical and biological assays or perform many processes on a single chip," says Cole. "Current commercial devices are not designed to work in space, so we are developing a set of unique chips along with a corresponding miniaturized controller and analysis unit.

NASA researchers are developing complex, portable microarray diagnostic chips to test for all the genes and DNA responsible for determining the traits of a particular organism, detect specific types of organisms, or use biosensor-like probes such as antibodies to detect molecules of interest. By applying this technology in laboratories and in the field where organisms live in extreme environments on Earth, astrobiologists can compare Earth-life with that which may be found on other planets. "The micro array chip system developed to go to Mars will be lightweight, portable and capable of detecting organic molecules," says Dr. Lisa Monaco, the project scientist for the Lab-on-a-Chip Applications Development program. "This instrumentation can easily be adapted for monitoring crew health and their environment."

Since the chips are small, a large number of them can be carried on a Mars rover to search for life or on carried on long-duration human exploration missions for monitoring microbes inside lunar or Martian habitats.

"We need customized microarray chips to find and characterize life at remote places on Earth, Mars, and other places in the solar system," says Dr. Andrew Steele, a scientist at the Carnegie Institution of Washington, a private research organization. Steele, the principal investigator for the Modular Assays for Solar System Exploration (MASSE) project, is working with Marshall scientists and engineers to develop the technology and instruments needed to analyze samples quickly and produce images of samples.
"When astrobiologists study life in extreme environments - whether it lives deep in the ocean, in Antarctica, or on Mars - they need a handheld device or something that can fit on a small robot," Steele explains. "We also need to be able to analyze the tests as quickly as possible within periods from 1 to 24 hours. Marshall is one of just a few places in the world developing these specific technologies for space and exploration applications and has unique experience in miniaturizing these instruments and designing them for the harsh space environment."

The Marshall Center team is collaborating with scientists at other NASA centers and at universities to design chips for many applications, such as studying how fluidic systems work in spacecraft and identifying microbes in self-contained life support systems. To make customized chips for these various applications, NASA has an agreement with the U.S. Army's Microdevices and Microfabrication Laboratory at Redstone Arsenal in Huntsville. The lab-on-a-chip research is funded by NASA's Biological and Physical Research Enterprise through the Marshall Center's Microgravity Science and Applications Division.

More information about space research is available on the Internet at: http://spaceresearch.nasa.gov