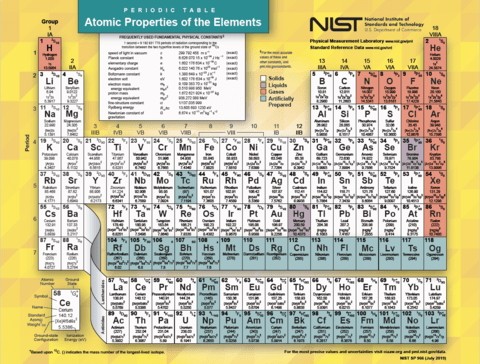 Largely unnoticed in the corners of countless classrooms around the world hangs the singular achievement of a Siberian-born scientist and the founding document of modern chemistry -- the periodic table of the elements, which turns 150 this year. While writing his textbook, Principles of Chemistry, Dmitri Mendeleev sought a logical way to organize all of the elements known to science at the time. Like many before him, Mendeleev noticed that certain elements resembled one another in their chemical properties. By ordering the elements by increasing atomic weight, he spotted a periodic repetition in these common properties and he published his periodic law and table-like list of elements in 1869. The periodic law allowed Mendeleev to predict the existence and properties of undiscovered elements that would ultimately fill the gaps in his table. Eventually, the discovery of protons and electrons changed the table in a subtle but important way. Mendeleev originally ordered his table by atomic weight, but the periodic table is now ordered by atomic number, which refers to the number of protons in the nucleus of an atom. The protons, in turn, define the number of electrons, located outside the nucleus, which control the properties that so regularly repeat within each column in the table.