Today the US Celebrates 50 Years of Space Exploration 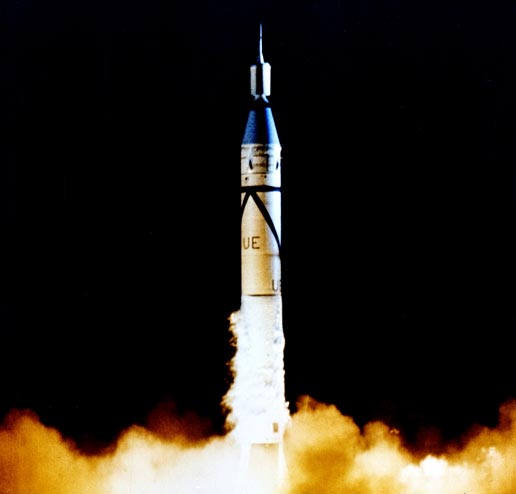 Explorer 1 was the first satellite launched by the United States when it was sent into space on January 31, 1958. Following the launch of the Soviet Union's Sputnik 1 on October 4, 1957, the U.S. Army Ballistic Missile Agency was directed to launch a satellite using its Jupiter-C rocket developed under the direction of Dr. Wernher von Braun. The Jet Propulsion Laboratory received the assignment to design, build and operate the artificial satellite that would serve as the rocket's payload. JPL completed this job in less than three months.

The primary science instrument on Explorer 1 was a cosmic ray detector designed to measure the radiation environment in Earth orbit. Once in space this experiment, provided by Dr. James Van Allen of the State University of Iowa, revealed a much lower cosmic ray count than expected. Van Allen theorized that the instrument may have been saturated by very strong radiation from a belt of charged particles trapped in space by Earth's magnetic field. The existence of these radiation belts was confirmed by another U.S. satellite launched two months later, and they became known as the Van Allen Belts in honor of their discoverer.

At a mere 31 pounds, it was tiny by today's spacecraft standards. Yet as it sprang skyward from Cape Canaveral, Fla., 50 years ago today, January 31, 1958, aboard a Jupiter-C rocket, the Explorer 1 satellite carried with it the enormous hopes and dreams of a Cold War America. The rocket was quickly swallowed by the night sky, and for 90 long minutes President Eisenhower and America waited tensely to learn the fate of the mission. Finally, from a California desert tracking station came the reply: "Goldstone has the bird." America had launched its first Earth-orbiting satellite and entered the Space Age.
Today we remember Explorer 1 for both its pioneering place in U.S. space history and its immediate contributions to science as the initial discoverer of the Van Allen Radiation Belts around Earth. For its developers, the people of NASA's Jet Propulsion Laboratory, Pasadena, Calif. -- then operated by the U.S. Army -- those memories are fond indeed.

Dr. William Pickering, then JPL's director and leader of the project, recalls the media's reaction to Explorer 1's success. "We were told there was going to be a press conference at the National Academy of Sciences (in Washington). About 2 a.m. we got into a car and drove over to the Academy. I can remember sitting in that car with (Dr. James) Van Allen and (Dr. Wernher) von Braun -- just the three of us. It was a cold, rainy night there in Washington and I think all three of us wondered a little bit about what was going to happen and who was going to be there at that hour of the morning. They took us around to the back door of the Academy and into the great hall. It was completely filled with people. The media were there and very enthusiastic when we got there...at the end of (the press conference), I think all three of us realized that life was going to be different."

Explorer 1's official chronology spans to 1954, when the Army authorized work on a joint Army-JPL program called Orbiter. In 1955, the U.S. government announced plans to launch a scientific satellite during the International Geophysical Year (July 1957 to December 1958). Orbiter competed head to head with another proposal from the Navy called Vanguard. Vanguard won, partly because it relied less on military technology. Despite the decision, JPL continued developing some Orbiter technology for use in tests of reentry heat shields for missiles. After Sputnik's "shot heard 'round the world," Orbiter was renamed Explorer and was approved for development as a backup program. Then came Vanguard's failure and Explorer 1 suddenly found itself front and center.

In just 84 days, Pickering and his JPL team worked with the U.S. Army Ballistic Missile Agency in Huntsville, Ala.; top experts from U.S. academia and the military; and legendary space luminaries such as German rocket scientist Dr. Wernher von Braun to develop Explorer 1's science package and communications system, as well as the high-speed upper stages for the Jupiter-C rocket. The work would mark JPL's shift in emphasis from rockets to what sits on top of them.

Pickering describes the mood around JPL during Explorer 1's development as confident. "We regarded ourselves as the experts in the rocket business, having made both the Corporal and Sergeant rockets for the Army and having developed most of the underlying design features of the modern rocket, both liquids and solids," he said. "We were confident."

Explorer 1's main science experiment was a cosmic ray detector built by Dr. James Van Allen of the State University of Iowa. It was designed to measure the cosmic radiation environment in Earth's orbit -- high-speed ions (atoms stripped of electrons) from the distant universe. It sought to measure the flow of cosmic ray ions of the lowest energies, which are completely absorbed by the atmosphere and can't be studied from the ground.

Explorer 1 was launched into a highly elliptical orbit and carried no onboard tape recorder. Therefore, its data could only be collected when it was within range of a tracking station, for just minutes at a time. The data collection soon revealed a mystery: at the low points of the orbit the cosmic ray count was near the expected value, but at the high portions of the orbit none were counted at all. Van Allen theorized the instrument might have been saturated by very strong radiation from a belt of charged particles trapped in space by Earth's magnetic field. Two months later, Explorer 3 confirmed the existence of these belts, which would become known as the Van Allen Radiation Belts.