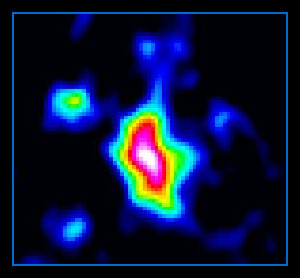 However, the new VLA observations of a quasar and its host galaxy seen as they were when the Universe was less than a billion years old indicate that the young galaxy has a supermassive black hole but no massive bulge of stars.

"We found a large amount of gas in this young galaxy, and, when we add the mass of this gas to that of the black hole, they add up to nearly the total mass of the entire system. The dynamics of the galaxy imply that there isn't much mass left to make up the size of stellar bulge predicted by current models," said Chris Carilli, of the National Radio Astronomy Observatory (NRAO), in Socorro, NM.

The scientists studied a quasar dubbed J1148+5251, that, at more than 12.8 billion light-years, is the most distant quasar yet found. Discovered in 2003 by the Sloan Digital Sky Survey, J1148+5251 is a young galaxy with a bright quasar core seen as it was when the Universe was only 870 million years old. The Universe now is 13.7 billion years old.

Aiming the VLA at J1148+4241 for about 60 hours, the researchers were able to determine the amount of molecular gas in the system. In addition, they were able to measure the motions of that gas, and thus estimate the total mass of the galactic system. Earlier studies of the system had produced estimates that the black hole was 1 to 5 billion times the mass of our Sun.

"The accepted ratio indicates that a black hole of this mass should be surrounded by a stellar bulge of several trillion solar masses. Our dynamical measurement shows there's not much mass left over, excluding the black hole and the gas, to form a stellar bulge. This provides evidence that the black hole forms before the stellar bulge," said Fabian Walter, of the Max Planck Institute for Radioastronomy in Heidelberg, Germany, who was a Jansky Postdoctoral Fellow at NRAO in Socorro when the observations were made.

"One example certainly doesn't make the case, but in this object we we apparently have an example of a black hole without much of a stellar bulge. Now we need to make detailed studies of more such objects in the far-distant, early Universe," Carilli said. "With the vastly improved sensitivity of the Expanded VLA and the Atacama Large Millimeter Array (ALMA), which will come on line in a few years, we will have the tools we need to resolve this question definitively," Carilli added.

"Studies like this are the key to understanding how galaxies first formed," Walter said.

Walter and Carilli worked with Frank Bertoldi and Karl Menten of the Max Planck Institute in Bonn; Pierre Cox of the Institute of Space Astrophysics of the University of Paris-South; Fred K.Y. Lo of the NRAO in Charlottesville, VA; Xiahui Fan of the University of Arizona's Steward Observatory; and Michael Strauss of Princeton University, on the project. Their research results are being published in the Astrophysical Journal Letters.

Click here for more about the Expanded VLA Project. -Ed.