Why do Jets Emanate from Quasars and Black Holes? 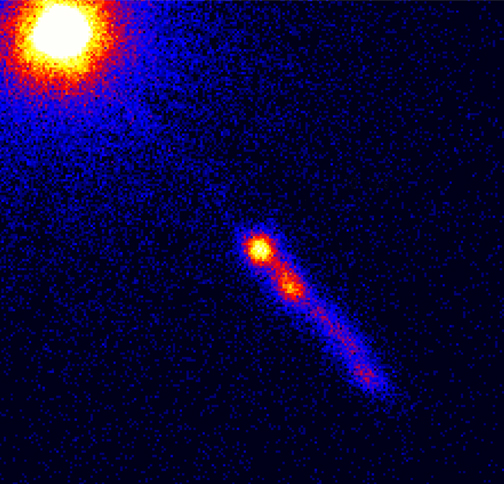 Recent discoveries have lead to new insights into how quasars work. What is the engine behind the massive amounts of energy released by quasars? A new clue is provided by the jet of Quasar 3C273, a radio, optical, and X-ray spike that extends over a hundred thousand light years into space. This relativistic jet emanates from a rotating, supermassive black hole. According to theory, whenever matter is pulled by gravity into the center, the resulting electromagnetic forces produce a beam of high-energy particles that are observed as a jet at radio, optical, and X-ray energies.

An international team of astronomers led by researchers at Yale has obtained key infrared observations that reveal the nature of quasar particle jets that originate just outside the supermassive black holes and radiate across the spectrum from radio to X-ray wavelengths. A complementary study of jet X-ray emissions led by astronomers at the University of Southampton, reached the same conclusion.

Both studies involve the jet of the Quasar 3C273, famous since its identification in 1963 as the first quasar. It now appears that the most energetic radiation from this jet arises through direct radiation from extremely energetic particles, and not in the way expected by most astronomers based on the previously available data.

"Quasar jets, although extremely luminous, are so distant as to be relatively faint and difficult to observe. Thanks to the sensitivity of NASA's Great Observatories, we have been able to map the 3C273 jet in infrared, visible light, and X-rays," said C. Megan Urry, Professor of Physics and Astronomy at Yale. "These combined data strongly suggest that ultra-energetic particles in the 3C273 jet are producing their light via Synchrotron Radiation."

Synchrotron Radiation has a number of unique properties:

2) Wide Energy Spectrum -- synchrotron radiation is emitted with a wide range of energies from infrared to energetic X-rays.

4) Synchrotron radiation is emitted in very short pulses, typically less that a nanosecond (a billionth of a second).

Up to now, there have been two competing theories of how emissions arise from the particles in the jets of quasars -- 1) the "Inverse-Compton" theory proposing that the emissions occur when jet particles scatter cosmic microwave background photons, and 2) the "Synchrotron Radiation" theory postulating a separate population of extremely energetic electrons or positrons that cause the high-energy emission.

"The Yale team used the Spitzer Space Telescope to observe Quasar 3C273 because it is located in space and is more sensitive to faint infrared jet emission than any previous telescope," said Yasunobu Uchiyama, a former postdoctoral fellow at the Yale Center for Astronomy. Spitzer observations enabled the team to determine the infrared spectrum for the first time and thus to realize its close connection to the X-ray emission.

Sebastian Jester, at the University of Southampton, led a complementary study that used the Chandra X-ray Observatory. This team obtained the first detailed study of energy distribution of X-rays from the jet, which also supported the synchrotron theory.

"Quasar jets attain nearly the speed of light and emit infrared-visible light and X-rays. But the jets have been too distant and faint to collect sufficient data to decide the nature of the emission until now," said Sebastian Jester. "These data are a significant advance in what we know about jets, and the results clearly suggest ultra-energetic particles are emitting synchrotron radiation in 3C273."

According to the researchers, while the lifetime of the X-ray producing particles is only about 100 years, the data indicate that the visibly brightest part of the jet has a length of about 100,000 light years. Since there would be insufficient time for the particles to shoot out from the black hole at close to the speed of light and then release their energy as radiation as far out as they are seen, the particles have to be accelerated locally, where they produce their emission.

Both teams also used data from the third of NASA's Great Observatories, the Hubble Space Telescope, and the radio telescopes of the Very Large Array (VLA). The three space telescopes and the VLA "see" emission of different wavelengths from celestial objects, and the combined data was essential to reveal the new comprehensive perspective on the jets. "The new observations show that the flow structure of this jet is more complicated than had been assumed previously," Jester explains. "That the present evidence favors the synchrotron model deepens the mystery of how jets produce the ultra-energetic particles that radiate at X-ray wavelengths."

"Our results call for a radical rethink of the physics of relativistic jets that black holes drive," said Uchiyama. "But, we now have a crucial new clue to solving one of the major mysteries in high-energy astrophysics."