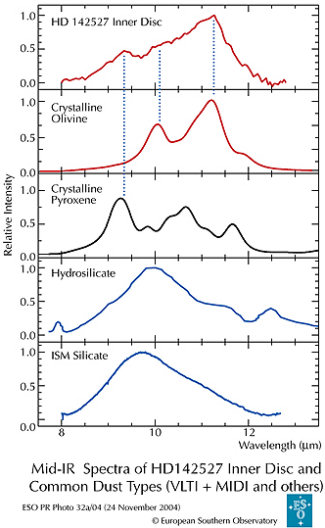 One of the hottest astrophysical topics - the hunt for Earth-like planets around other stars - has just received an important impetus from new spectral observations with the MIDI instrument at the ESO VLT Interferometer (VLTI).

An international team of astronomers [2] has obtained unique infrared spectra of the dust in the innermost regions of the proto-planetary discs around three young stars - now in a state possibly very similar to that of our solar system in the making, some 4,500 million years ago.

Reporting in this week's issue of the science journal Nature, and thanks to the unequalled, sharp and penetrating view of interferometry, they show that in all three, the right ingredients are present in the right place to start formation of rocky planets at these stars.

"Sand" in the inner regions of stellar discs

The Sun was born about 4,500 million years ago from a cold and massive cloud of interstellar gas and dust that collapsed under its own gravitational pull. A dusty disc was present around the young star, in which the Earth and other planets, as well as comets and asteroids were later formed.

This epoch is long gone, but we may still witness that same process by observing the infrared emission from very young stars and the dusty protoplanetary discs around them. So far, however, the available instrumentation did not allow a study of the distribution of the different components of the dust in such discs; even the closest known are too far away for the best single telescopes to resolve them. But now, as Francesco Paresce, Project Scientist for the VLT Interferometer and a member of the team from ESO explains, "With the VLTI we can combine the light from two well-separated large telescopes to obtain unprecedented angular resolution. This has allowed us, for the first time, to peer directly into the innermost region of the discs around some nearby young stars, right in the place where we expect planets like our Earth are forming or will soon form".

Specifically, new interferometric observations of three young stars by an international team [2], using the combined power of two 8.2-m VLT telescopes a hundred metres apart, has achieved sufficient image sharpness (about 0.02 arcsec) to measure the infrared emission from the inner region of the discs around three stars (corresponding approximately to the size of the Earth's orbit around the Sun) and the emission from the outer part of those discs. The corresponding infrared spectra have provided crucial information about the chemical composition of the dust in the discs and also about the average grain size.

These trailblazing observations show that the inner part of the discs is very rich in crystalline silicate grains ("sand") with an average diameter of about 0.001 mm. They are formed by coagulation of much smaller, amorphous dust grains that were omnipresent in the interstellar cloud that gave birth to the stars and their discs.

Model calculations show that crystalline grains should be abundantly present in the inner part of the disc at the time of formation of the Earth. In fact, the meteorites in our own solar system are mainly composed of this kind of silicate.

Dutch astronomer Rens Waters, a member of the team from the Astronomical Institute of University of Amsterdam, is enthusiastic: "With all the ingredients in place and the formation of larger grains from dust already started, the formation of bigger and bigger chunks of stone and, finally, Earth-like planets from these discs is almost unavoidable!"

It has been known for some time that most of the dust in discs around newborn stars is made up of silicates. In the natal cloud this dust is amorphous, i.e. the atoms and molecules that make up a dust grain are put together in a chaotic way, and the grains are fluffy and very small, typically about 0.0001 mm in size. However, near the young star where the temperature and density are highest, the dust particles in the circumstellar disc tend to stick together so that the grains become larger. Moreover, the dust is heated by stellar radiation and this causes the molecules in the grains to re-arrange themselves in geometric (crystalline) patterns.

Accordingly, the dust in the disc regions that are closest to the star is soon transformed from "pristine" (small and amorphous) to "processed" (larger and crystalline) grains.

Spectral observations of silicate grains in the mid-infrared wavelength region (around 10 µm) will tell whether they are "pristine" or "processed". Earlier observations of discs around young stars have shown a mixture of pristine and processed material to be present, but it was so far impossible to tell where the different grains resided in the disc.

Thanks to a hundred-fold increase in angular resolution with the VLTI and the highly sensitive MIDI instrument, detailed infrared spectra of the various regions of the protoplanetary discs around three newborn stars, only a few million years old, now show that the dust close to the star is much more processed than the dust in the outer disc regions. In two stars (HD 144432 and HD 163296) the dust in the inner disc is fairly processed whereas the dust in the outer disc is nearly pristine. In the third star (HD 142527) the dust is processed in the entire disc. In the central region of this disc, it is extremely processed, consistent with completely crystalline dust.

An important conclusion from the VLTI observations is therefore that the building blocks for Earth-like planets are present in circumstellar discs from the very start. This is of great importance as it indicates that planets of the terrestrial (rocky) type like the Earth are most probably quite common in planetary systems, also outside the solar system.

The present observations also have implications for the study of comets. Some - perhaps all - comets in the solar system do contain both pristine (amorphous) and processed (crystalline) dust. Comets were definitely formed at large distances from the Sun, in the outer regions of the solar system where it has always been very cold. It is therefore not clear how processed dust grains may end up in comets.

In one theory, processed dust is transported outwards from the young Sun by turbulence in the rather dense circumsolar disc. Other theories claim that the processed dust in comets was produced locally in the cold regions over a much longer time, perhaps by shock waves or lightning bolts in the disc, or by frequent collisions between bigger fragments.

The present team of astronomers now conclude that the first theory is the most likely explanation for the presence of processed dust in comets. This also implies that the long-period comets that sometimes visit us from the outer reaches of our solar system are truly pristine bodies, dating back to an era when the Earth and the other planets had not yet been formed.

Studies of such comets, especially when performed in-situ, will therefore provide direct access to the original material from which the solar system was formed.

The results reported in this ESO PR are presented in more detail in a research paper "The building blocks of planets within the "terrestrial" region of protoplanetary disks", by Roy van Boekel and co-authors (Nature, November 25, 2004). The observations were made in the course of ESO's early science demonstration programme.

[1]: This ESO press release is issued in collaboration with the Astronomical Institute of the University of Amsterdam, The Netherlands (NOVA PR) and the Max-Planck-Institut für Astronomie (Heidelberg, Germany (MPG PR).

[3]: The MIDI instrument is the result of a collaboration between German, Dutch and French institutes. See ESO PR 17/03 and ESO PR 25/02 for more information.
Comments (0)