[ARTICLEIMGR="1"]I can finally announce results in my 9 month quest to match up my short-tube Newtonian with a binoviewer, including some pleasant surprises. I shall try my best to refrain from gushing over two-eyed viewing compared to one; as Joe Friday used to say, "just the facts, Ma'am." But first, I have to bore you with a bit of background.

Earlier this year I spent several months evaluating a Denkmeier II with low power OCS in my Vixen R200SS, an f/4 Newtonian that provides exceptionally wide fields for an 8" scope at the penalty of a 37% central obstruction. Russ Lederman took an active and supportive interest in my project and we exchanged many emails along the way. I viewed numerous objects under different seeing conditions and even did this year's Messier marathon through the Denk (well, 101 of them). Unfortunately in the end, Russ and I concluded that the scope just wasn't a good match for the Denk II, even with the OCS in high power mode. My personal belief from repeated star testing is that the binoviewer prisms were adding positive spherical aberration (+SA) to that already present in the mildly over-corrected Vixen primary. In an under-corrected scope this might actually help, but in mine it made doubles and planets noticeably softer relative to mono mode.

I had been on a ubiquitous AP waiting list for the Baader Planetarium and when my name came up I decided to give them a try, having already returned the Denk's. My Vixen is fitted with a JMI NGF-DX2 long tube focuser having 3" of back focus (albeit with focuser intrusion) and I didn't expect much trouble getting the Baader to focus. I was wrong. Initially it seemed close enough with the included 1.25x Glaspath compensator that I was sure it would focus with the 1.7x Glaspath. Wrong again. (Just missed; came thaaat close...) I ended up having to use the screw-in optics portion of the optional AP Barlow in the nosepiece plus the 1.25x Glaspath for 2.6x measured overall and negligible intrusion. Always leaving one of the Glaspath compensators in place is a good thing, because they are specifically designed to compensate for SA and CA introduced in the binoviewer prisms.

Finally, to the testing: The AP/Baader binoviewer in the Vixen star tested absolutely identical to the scope in mono mode. This suggests that the Baader is not adding any aberrations beyond those of the scope I have already learned to live with. Vega showed no color in the center of the field but seemed to pick up inward blue fringing a bit farther from the edge than usual for my Panoptics. The Double-Double actually seemed a bit cleaner with the binoviewer than mono, no doubt due to the same two-eyed effect I have noted before in my binoscope. The optical quality of the Baader was further borne out by clean splits of mu Dra, 12 Lyn and iota Cas as seeing allowed. 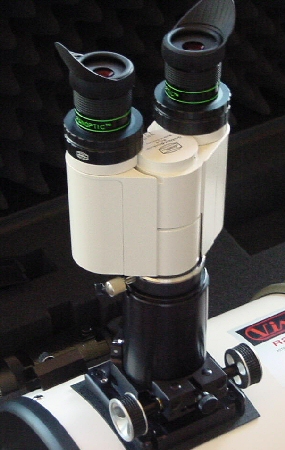 Nor did the Baader exhibit the red fringing on Venus' limb that I had noted in the Denk II (present in the right eyepiece only). A 37% obstructed scope is by no stretch a planetary scope, but nonetheless Saturn looked no more mediocre in the Baader than in mono mode. I had also evaluated widefield edge effects in the Denk II using the low power OCS. The Denk OCS corrected Newtonian coma well, but less so field curvature. Neither was really evaluable in the Baader since it could muster less than half the TFOV of the Denk (with 24Pan's, 0.75° in the Baader vs. 1.65° in the Denk).

Despite the hassles with my fast Newtonian, I am quite pleased with the AP/Baader Planetarium. At least for me, optical quality has turned out to be of more personal importance than the incredible versatility of the Denkmeier system. Longer f.l., less obstructed scopes seem to fare better with other binoviewers - maybe I should hire my Vixen out as a test stand!