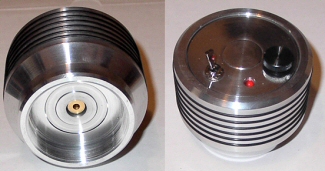 Collimation, one of the hardest parts of amateur astronomy, particularly for the Neophytye. All sorts of tools abound for collimating newtonians, lasers, eyepieces and so on. When I acquired my used Celestron C8 I realized that I was going to have to face the collimation issue. Being 50 and a wearer of progressive trifocals, I had reservations about the accuracy of my optical collimation efforts and never felt confident of my tweaking. At several points I felt that the only way to align the scope was to remove the secondary and level it with a caliper, and make my optical adjustments from there. Cold weather, Hot muggy weather, Mosquitos and so on. When I saw the Digitec Optical laser SCT collimator, I was intrigued. After some thinking and talking with the courteous and helpful staff, I took the plunge. At $219, it felt a bit steep, but I decided that in the worst case scenario, I could return it and pay the thirty something restocking fee.

This is the best collimation tool I've used. Accurate and unambiguous, even to a myopic 50. This device, milled out of aluminum contains a laser that is screwed directly onto the back of the OTA and then projects a beam of red light through the scope optics onto a piece of white paper taped to the wall. The scope is then collimated by adjusting the position of the secondary. Because you do this indoors, the scope and the collimation adjustment screws can be placed at a convenient position that is easy to reach. Accurate and spot-on collimation is indicated by a perfectly round red donut (or annulus) of light containing a number of perfectly concentric interference lines. Collimating with this device is quite accurate because you can actually MEASURE the concentricity of the projected image with an accurate ruler or caliper.

The beauty of this appliance is that it does not have the requirements of other techniques.

- It is performed indoors

- It is unaffected by astronomic conditions

- Collimation assessment is a binocular evaluation.

Although it seems expensive, it may be important to realize that it is not only well made and easy to use, but it will save you time and provide you with the valuable knowledge that your scope is perfectly collimated. I recommend this tool in the highest possible terms. I give it 5 moons!

Addendum: I have discovered that this collimator appears to have been designed for SCT's 8" and smaller. On larger scopes, the laser is not powerful enough to generate a usable projected image. - Donald