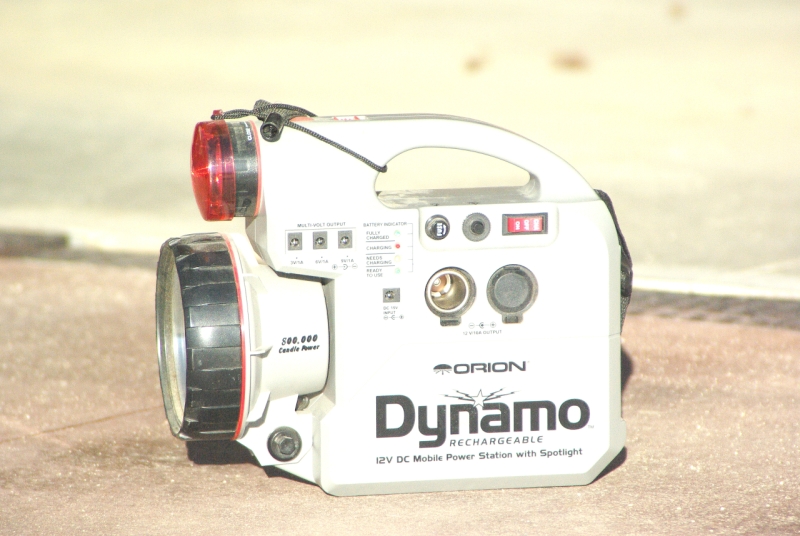 Way back at the dawn of time, when I graduated from something made of pipe fittings mount to a real equatorial mount, power was house current, and came from an extension cord. When I bought a Losmandy GM-8 several years back, I found myself using a AC to DC converter at first, but this wasn’t a perfect solution. I have never been comfortable running an extension cord through wet grass at night, and since I then lived in a suburb, a really dark sky meant going to places where there is no house current.

My first solution was, as typical for me, cheap and dirty. I bought a motorcycle battery and a recharger. The battery wasn’t sealed, and on of my jaunts to darkness, the battery flipped over, spilling battery acid all through the back of my car, disfiguring the back portions of the interior. I needed a better solution.

What I bought was the Orion Dynamo, which combines a sealed battery, a recharger, and lighting in a convenient, easy to move package with a carrying handle and a carry strap. There are two 12 volt, 10 amp DC outputs, built around the standard automobile cigarette lighter plug. There are also three plugs for 3 volt, 6 volt, and 9 volt DC outputs (all one amp) for powering a variety of other possible accessories. Input power comes through a 15 VDC charger that plugs into house current, included with the Dynamo.

On the backside of the Dynamo is a storage compartment that pops open, revealing a cable that allows you to recharge the Dynamo from any 12 VDC battery. I can’t imagine why you would use this in the field; as bad as having to abandon an astronomy session in the field, this isn’t as bad as recharging your Dynamo, completing your session, and then discovering that your car won’t start! Still, it is nice to have this as an option; perhaps you might use it with the car engine running. I’ve only used to recharge the Dynamo from solar panels, as part of an experiment with improving utilization of solar panels. (Unlike sleeping bags—which never seem to roll up neatly enough to slide back into the stuff sacks—there’s enough room in the compartment to easily push this cable back in and close the door.)

The Dynamo includes two lights as well. One is labeled as 800,000 candlepower, guaranteed to make you so popular at star parties! But I can imagine emergency situations where it might be nice to have something this bright available—even at a star party. A second light comes with a removable red filter on the front, which still seems too bright for use at a star party. This light has a separate switch with three settings: off, blinking, and on.

I mentioned earlier the advantage of having the recharger built into the unit. Here’s another area where this is far nicer than having a bare battery.

You have LEDs that tell you the state of the battery. Instead of guessing, you can immediately tell if the battery is fully charged, or whether you need to leave it plugged in a bit longer. Remember that any battery pack like this is going to slowly lose charge if it sits for weeks on end. I had to cut short an astrophotography session recently because I hadn’t used the Dynamo in at least a month, nor had I bothered to recharge it first. But that’s not a fault of the Dynamo, unless the manufacturer makes it smart enough to connect itself up to the wall. But that makes me think of the supercomputer in the 1970 film Colossus: The Forbin Project, so I won’t be asking for that much smarts.

There is one additional control on the Dynamo. See this little red rocker switch? It tells the Dynamo whether you are charging it, or using it. It is important to turn it off when you are done, and to set it to charge when you are ready to recharge it.

I bought this about two years ago, and it has given me absolutely no problems. I think I paid $79.95 for it, but I see that it has been replaced with a bigger version called the Dynamo Pro 17 that Orion sells for $119.95. If you are one of those who are using a bare battery, or are about to buy one, you should consider this as a much handier—and much safer alternative.