SkyTools 2. All you need? 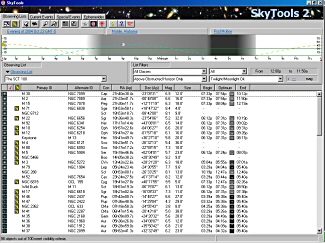 Is there such a thing as an astronomy program that’s powerful, useful, easy to use, and attractive? I didn’t think so. Not until I tried Greg Crinklaw’s SkyTools 2, that is. “ST2” is one of the most professionally executed amateur astronomy programs I have ever seen. It looks good and feels good.

What’s SkyTools 2? As I’ve pointed out on more than one occasion, astronomy programs currently fall into one of three categories: planetariums (a “realistic” night sky on your monitor), computer atlases (A super Uranometria that lives on your hard drive) and planner-loggers (giant databases that help you generate lists of objects to observe). SkyTools places itself squarely into the latter category. It does have elements of the other genres—it can do very attractive atlas charts or even draw you a picture of the entire sky—but it is really a mega database. Planners are not the type of software novice amateurs usually gravitate to at first, but as they enter the “advanced” ranks, many begin to find them more helpful than something that paints a pretty sky on the screen. Frankly, with more and more amateurs embracing goto technology there’s less and less need for charts—computer-printed or otherwise. I’ll often work through a list of dozens of objects without even glancing at a chart.

I think planners are the wave of the future in astronomy-ware, but I realize people are reluctant to leave behind the beauties of Starry Night or The Sky 6 for something they perceive as nothing more than a dull and dry Access database loaded up with the NGC objects. But most folks change their minds in a hurry once they get a load of what this program can do. Don’t believe it? I certainly don’t have room here to list all of SkyTools’ features, but here is a very abbreviated summary:

Geez, Louise! And, again, this is just a small sample of what ST2 can do. But the question is always: “How well and simply does it do all this?” It’s easy to pile features on, but if the program is clunky--hard to navigate, slow and unstable--all the features in the world won’t save it. The answer to the question is, “darned good.”

I was impressed from the moment I put the CD in the drive. One of the things astronomy-software program developers have tended to neglect is installation. Often you’re merely told to copy files off a CD to a directory somewhere on your hard drive. Not SkyTools 2. The installation procedure is fully automated and very professional-looking. In just a few minutes, I had the program settled in on my antique 566mhz PC.

Once SkyTools was running, I was presented with the display shown in figure 1. I was a little surprised. Where the heck were the Windows menus? You know, “file,” “edit,” etc., etc.? Was Greg Crinklaw gonna make me learn a new way of doing things? Aw for--! I was miffed, to put it lightly, but I persevered, and it became evident that SkyTools doesn’t have the familiar Win-menu bar because it doesn’t need it.

Greg has been able to simplify and organize to the point where you just click on stuff you want to use or view. Menus appear if they are needed, then they get out of the way. Want to view the month’s events calendar? Just click on the little calendar icon. Interested in data on an object? Click on the object. Need a chart? Again, just a click or two away. In just a few minutes I was able to make my way around ST2. Oh, I did have a little help: the program includes an excellent “help” system. Manual? Don’t need no stinkin’ manual. ST2 does not include the now de rigueur .pdf manual file common to must astro-software. And you won’t miss it. Everything you need to know is accessible via Help, and this is much more usable, really, than an Acrobat file—or even a printed guide.

Sounds good, but how does the newbie get started using the program? Pop open or pour the beverage of your choice on this rainy afternoon. Ready? OK, let’s take a stroll through SkyTools 2.

The opening screen in Figure 1, “Observing Lists,” which you see when the program finishes loading, is your home base, and the place where you’ll spend most of your time, but other screens, available via the tabs that are strategically placed near the top of the display, give you access to “Current Events,” “Special Events,” and “Ephemerides.”

Below these tabs, you’ll find an extensive icon-bar. This allows you to do things like search for objects to add to your lists, checkout an evening’s sky events, configure the program and turn on SkyTools’ red night-vision mode. I like icons, and was happy to see that these icons are well thought out for the most part. Nothing’s more frustrating than trying to remember what a programmer is trying to represent with some odd-looking little picture.

Below the icons, you come to a row of hypertext links. These take you to windows that allow you to set or select your location, set day and time and other installation specific options. Initially, I was a little puzzled by this feature. Why have a mixed metaphor—hypertext AND icons--instead of just adding a few more icon buttons to the bar? But this turns out to be a useful way to do things, since the hypertext for these entries actually changes to reflect your current settings. You don’t have to click an icon and bring up a window to see what your settings for a particular value are. For example, instead of just reading “Location,” that hypertext field reads “Mobile, Alabama” when I finish specifying my observing location. Purty neat.

Next up onscreen is what Mr. Crinklaw calls the “NightBar.” This is a graph that displays altitude along its Y axis and time along its X axis. A look at this instantly shows when twilight begins and ends, when the Moon rises/sets, and when your object of interest (when selected/highlighted in your list) is best placed for observing. A graph of this type is a splendid idea that has appeared in a few other astronomy programs over the years (most notably David Chandler’s venerable Deep Space), but in a much less attractive and less fully-realized form. If there’s one SkyTools feature that people really love and comment on, it’s this NightBar.

After the NightBar comes drop-down menus that allow you to select the observing list you want to work with (save as many as you like on your hard drive) and filter objects for display in the chosen list (by current visibility, magnitude and type). These commands are responsive and their functions are quite intuitive.

And then there’s the meat. The actual observing list. It’s attractive and easy to read (a good thing, given my middle-aged eyes). But what’s the best thing about it? The little icons. In another small touch that at first seems like a throwaway, Greg places a small picture at the beginning of each object’s row to represent its type—a little spindle shape for a galaxy, a teeny fuzz-ball for a globular, etc. Doesn’t seem like a big deal at first, but at 3 am out in the field it’s a feature that I really appreciate. No hunting for abbreviations or guessing as to what NGC umptysquat is. Each object in the list is also accompanied by the usual data—position, magnitude, etc. If this isn’t enough, clicking on an entry brings up a data window with further details. One surprising omission is the Dreyer abbreviations for NGC objects (you know, Vb*Cl, Ri,, etc.). I know some folks don’t like these abbreviations and find them annoying, but my opinion is that they present a lot of data in a very compact format. I do miss ‘em in SkyTools. 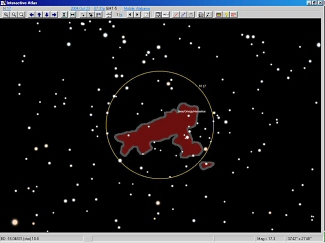 Right-clicking on an object in your list brings up a sub-menu that allows you, among other things, to produce a chart. Just about every planner does some charting. But usually the maps seem like an afterthought. I didn’t get this feeling at all with SkyTools 2. Not only is the Interactive Atlas, in its “realistic” mode, beautiful to look at; it really is “interactive.” Being able to click anywhere on a chart and center on this position, for example, is something new to planner software, whose maps usually tend to the static. And it is very welcome. I can actually work with SkyTools’ charts instead of just look at them. What really knocks peoples’ socks off, though? SkyTools’ nebulae (see figure 2). Not boxes. Not outlines. Lovely hydrogen-red clouds painted on the sky. Fill that sky with colored, bit-mapped stars and you’ll know why folks are finally talking about the beauty of a planner-program’s star charts!

Before you can develop lists and charts of objects for the evening’s observing run, you’ve got to pull ‘em out of the program’s gigantic database. With over a million objects, search facilities must be good, and I mean good. Luckily, SkyTools 2 is up to the task. It provides two methods of finding objects to place in your lists. The first method is the quick and dirty one: “Designation Search.” Clicking the little magnifying glass icon in the toolbar brings up this window. In it, you can type in object names or numbers and retrieve DSOs on the fly. Typing “M 8” or “Lagoon” or “Lagoon Nebula,” for example, brings up a list of candidate objects, one of which is the famous nebula. This works well for the most part—though I was annoyed that the program required me to type “M
Comments (0)