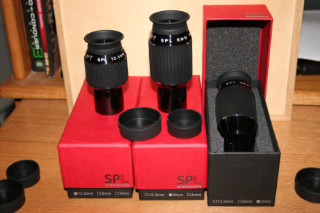 Eyepiece preference is a very individual choice for amateur astronomers, and choosing an eyepiece to suit your needs can be a challenging task. In this review, I’ll compare the William Optics (WO) SPL series to the WO UWANs, as well as a 7mm TMB/BO Planetary eyepiece and a 7mm Televue Nagler I was allowed to borrow (thank you to both, you know who you are). I really took my time analyzing these eyepieces over 6 months, because I wanted to observe all the planets and other object I could with these before writing this review.

What is a WO SPL?
William Optics expanded on their list of eyepiece lines in 2007 with a new series called the Super Planetary Long Eye Relief, or SPL series of eyepieces. The SPL series has several characteristics that define their position in the vast market of eyepieces available. They all have a 55 degree apparent field of view (AFOV), they all have 20mm of eye relief which is quite a lot, and they are all priced at $129 each, or currently at $319 for the set of three. They come in three focal lengths currently; 3mm, 6mm, and 12.5mm, in the standard 1.25” barrel size. They contain 7 elements in 4 groups, each having a large glass element to look through, and are fully multicoated with blackened edges. The barrels have a tapered cut to them, like other WO products, which prevents the eyepieces from snagging on the typical compression ring eyepiece holder common today. Another feature typical of the WO eyepieces is their all black anodized finish, which looks nice and seems pretty resistant to wear. The packaging they come in is typical WO high quality sturdy boxes and custom cut foam.

Testing Equipment
Not all eyepieces perform the same with different telescope types and focal ratios. The telescope used for these tests is my WO Megrez 80mm APO doublet refractor scope. It allows me to reach focus in my basement at about 35 feet, which is handy for critical daylight testing against charts, and provides sharp color free viewing of planets. I have a high resolution chart and a grid made up of 1cm squares that I have used for a variety of testing purposes in my basement for very controlled and repeatable testing purposes. I tested indoors and outside, in both darkness and daylight, in an attempt to find and isolate issues that might exist with the system or its components. The focal length of this scope is 555mm and it has a focal ratio of F/6.9 which is not considered to be fast or slow, but right in the middle. The following values are given for comparison in my system.

Physical Characteristics of the eyepieces
All three of the SPLs look very similar in that the upper half (the half you look into) which has a nice soft rubber eyecup, and a large lens to look through. In fact, the WO website has a detailed diagram showing the design of these, if you are into seeing how these lenses are laid out, and it appears that all three have exactly the same upper layout for the glass elements. The 3mm is the longest, although none are what I would call heavy eyepieces. They all have black interiors with ridged edges to help baffle light reflections inside the eyepiece. 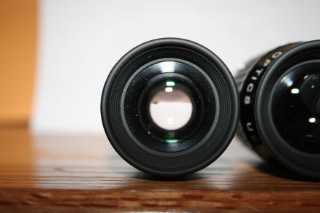 Indoor Testing Results
Indoors on my charts, they all produced a very sharp image, with no visible aberrations. Really, I couldn’t see any aberrations of any type in my telescope. All showed no significant signs of field curvature, barrel or pincushion distortion, or any other visible aberrations that I could detect. 20mm of eye relief is a lot more than I was used to, and I found the best location for my eye was actually close to but not touching against the rubber eye cup. I tested these with my reading glasses on just for fun, since I don’t need glasses for distance vision with the eyepiece cub folded down, and feel confident that eyeglass wearers will love the eye relief on these

Outdoor Testing Results
I tested all three eyepieces on a variety of objects, including planets, the moon, and various DSOs, and again found them all to be excellent performers. The initial testing on planets included Venus, and Saturn when they were off to the West, and all three eyepieces performed extremely well. The 3mm eyepiece is pushing the practical limits of my 80mm refractor, but on Saturn, it proved to be my favorite when the skies were steady enough. On Venus, I found the 6mm produced the best views. With Jupiter, the 6mm produced the best image most of the time, and only occasionally found the 3mm to provide any additional detail, which wasn’t surprising since Jupiter was positioned rather low and to the South in a rather poor location for me. On the Moon, all three worked equally well, with no real signs of glare or flaring. In all cases, I felt that the eyepieces are equal in quality to each other. On DSOs, they performed equally well, and the 3mm was exceptionally good for viewing double stars. In open star clusters, these eyepieces produce sharp to the edge star field views with no noticeable astigmatism or field curvature. I finally got a chance to observe Mars, but the skies were not very steady, and the 3mm eyepiece proved to be too much for the skies I was viewing through. The 6mm worked well, but I what I really needed was something in between, so I combined the nosepiece of the 3mm with the body of the 12.5mm, and this provided the best views of the night. More details on this are below.

Comparisons to other eyepieces
UWANs – The significantly wider field of view of the UWANs is a huge advantage for me since I am using an EZTouch mount from WO that does not track the sky, and have significant light pollution. This is true for every object I viewed, yet surprisingly the 55 deg FOV SPLs wasn’t as much of a hindrance as I thought it might be. The twist up eye cup design of the UWAN is very nice, and I wish the SPLs had the same feature. On planets, the SPLs showed less light scatter, with equal sharpness and contrast. On DSOs, the clarity and contrast was equal, but the wider fields of view with the UWANs was a definite advantage. The UWANs have less eye relief, which was noticeable when switching back and forth. 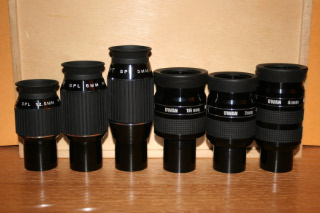 7mm BO/TMB Planetary - The 6mm SPL and 7mm BO/TMB appeared identical to me in optical performance, except that they had less eye relief. I really didn’t notice that the AFOV on these was any different, even though the specs say it is 60 deg vs. 55 deg on the SPLs. The SPL has a softer rubber eyecup, but the BO/TMB has a twist up eye cup, both are comfortable, with the SPL having slightly more eye relief. The WO SPL has an edge in fit and finish, but the two performed equally in all my optical tests.

7mm TV Nagler – The 7mm Televue Nagler compared more closely to the 7mm UWAN, and I found those two to be nearly identical in performance optically. The 7mm Nagler showed slightly less light scatter on planets than the 7mm UWAN, but the 6mm SPL showed even less light scatter than the Nagler to my eyes. This was most evident to my eyes on Jupiter. The Nagler is of course a much wider view at 82 deg AFOV, and appeared to have a warmer color while viewing. On DSOs, again the wide field of view wins, however a much shorter eye relief than the SPLs.

Plossls and Orthos – I have used a variety of Plossls including TV plossls in 8, 11, and 15mm sizes, Nexstar Plossls (the kit ones), an Orion Highlight 6.3mm plossl, a Meade 26mm plossl and an Antares volcano top 6mm ortho. I don’t own any of these eyepieces any more, so this is not a direct comparison. TV plossls were excellent optically, but I found myself barlowing the plossls with a 3 element Ultima Barlow, it occurred to me that I was looking through exactly the same number of glass elements as the SPLs. The biggest reason I no longer have any plossls or orthos, is due to less comfortable eye relief and much smaller front glass element. The SPLs are simply much nicer to use, it really is no comparison.

And now for the surprise
I decided to try switching the nose pieces and barrel pieces around one night and found that they could be unscrewed and reattached in different combinations. While this is not something I would generally recommend, due to the likelihood of dropping something in the dark, getting your fingers on the glass, or getting unwanted dust inside the eyepiece, it fascinated me enough to test the combinations to see if I could determine what focal lengths I was creating. I used my indoor grid chart, and measuring the field of view, created a relative scale that may be interesting to someone else who buys the set of three. The testing results from my combinations revealed the following. I’ll use the abbreviations of NP to mean the nose piece, the part that has the Barlow type lens in it, and EP to mean the eye piece, the part that varies in length.

I gave various options a try and found out that in all cases they came to focus, and did not seem to introduce any noticeable aberrations, except for a visible reflection ring at the edge of the field stop while using the 3mm nose piece with the 6mm and 12.5mm eyepieces in daylight. Of course, it would make more sense to buy dedicated eyepieces with the sizes in between the current offerings if they become available (hint –WO if you are reading this, how about some more sizes?), but for now this may provide me or others with a way of ending up with some in between sizes for that occasional night when the delivered sizes aren’t exactly what is needed. 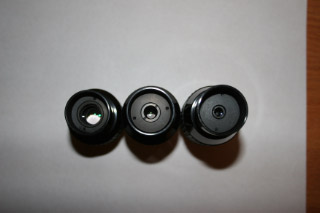 One more small surprise
I tried all three eyepieces in my Stellarvue 50mm RACI Finder Scope and they all worked surprisingly well. I was actually quite shocked to see that they performed much better than the stock crosshair eyepiece, even though this finder has a 200mm focal length, making it a rather fast F/4 optical scope. Star fields are sharp to the edge in all three.

Negative Aspects
First, these eyepieces are only available in three sizes right now. In addition, the first batch that WO made was not threaded for filters; however WO informed me that this has been changed and newer batches are being threaded.

Summary
The SPL eyepieces fill a gap that I think is one that many will enjoy. They have long eye relief and are very comfortable to view through. They provide a moderate field of view, and have high quality optics suitable for planetary viewing. I think the combination of available sizes are best suited to short focal length refractors like the various ED/APO scopes, because they allow the user to get to high magnifications without having to use a Barlow. They are a good compliment to my UWAN eyepieces because they show more detail for planetary viewing, when my skies permit it. These are definitely keepers for me, and will remain in my eyepiece lineup for a long time. I hope WO decides to offer additional sizes on these in the future.
Comments (0)