The Speers WALER line of Eyepieces 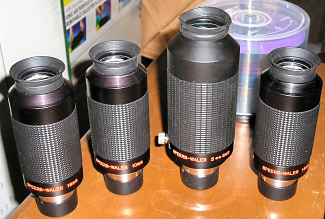 Not long ago I was trucking along fat, dumb and happy with my set of Plossls and a few “Wide Angle” eyepieces from Orion (Expanse) and Antares (W70s). The views weren’t as good as those I saw through other telescopes at star parties, but I attributed most of that to better telescopes, having a chance to look through some APOs and one really nice Starmaster.

Then one night my friend Larry Miele came over and brought a few of his Speers Waler eyepieces to try out. Using my own EPs and looking at Saturn I was pleased with the view. Cassini was strikingly evident and the shadow on the rings was very sharp. Larry suggested I try his 5-8mm Speers Waler variable focal length. So I did. What a difference! The contrast was higher, atmospheric bands were much more evident and ring detail was greatly enhanced. I was surprised an eyepiece could make such a difference. On top of that, the apparent field of view in that EP is over 80 degrees, with good eye relief making viewing much more pleasurable. We also tried out his 14mm SW and it did for widefield views what it did for high magnification planetary views.

The difference was dramatic enough that I started buying a few SW EPs. The first was the 5-8 variable that impressed me so much. Then I got a 10mm and 14mm in the 72 degree AFOV version. I was happy with the performance of all of those. Then I decided to try the 82 degree versions of their 18, 14 and 10mm EPs. To make a long story short, I ended up keeping the 82 degree EPs and either selling or returning the 70s.

So now I’ve had a chance to try out all but the 7.5mm EP of the current Speers Waler offerings from Antares/Sky Instruments. In this article I will attempt to describe the performance and differences.

Speers Waler (SW) is a combination of the Canadian optician who designed them (Glenn Speers) and WALER, an acronym standing for Wide Angle Long Eye Relief. The eyepieces are manufactured by Sky Instruments of Vancouver, B.C., Canada and are available through several U.S. and Canadian dealers. They currently offer SWs in the following configurations:

The 82 degree, fixed FL versions are all 5 inches long. The 72 degree versions are 6 inches. The 5 – 8 variable FL is about 7 inches when set to 8mm and about 9 inches when set to 5mm. The variable consists of a sliding bottom section which is released by a setscrew. Apparently the bottom section is a type of negative lens and functions much the same way as a Barlow, where the FL extension can be varied by the position of eyepiece.

The eyepieces were evaluated in two telescopes. My main workhorse is an old Konus 8 inch F5 Newtonian reflector (1000mm FL). The other is a Meade 5 inch F9 Achromat (1200mm FL).

As I said before, I had become accustomed to less-than-perfect high power views through that newt. I had subscribed to the popular wisdom that a newt just wasn’t in the same class for high-powered sharpness as refractors. I had spent a lot of time evaluating the optics and learning how to properly collimate the scope. I had by that time been convinced that collimation was dead on, and mirror aberrations were minimal. So it was quite a surprise when I saw all that detail come to life when I tried the SW.


So on to performance. With the two telescopes I get the following magnifications and corresponding fields of view with each of the eyepieces: 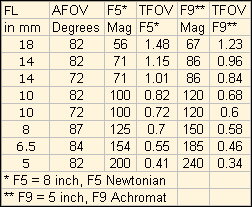 The 8, 6.5 and 5mm FLs refer to the 5-8 variable at three different settings. TFOV was pretty close, based on my estimation. I used both the full moon and timed the transit of objects when sidereal tracking was turned off to determine this.

I used the 18 on quite a number of open clusters, including the Double Cluster, M35, M36, M37, M38, M46 and M47, but only with the newt, as I had not yet acquired the Achromat. The views were stunning, although near the edge of the field – I’d say about 75% of the way out from the center – focus started becoming soft. I could focus the edge but then the inside stars would become a bit fuzzy. It wasn’t dramatic, and didn’t take away from the effect, but it was noticeable. M42 was exceptional, with wispy detail filling most of the field. M81 and M82 were a real treat with both galaxies well within the FOV. The plus side was very sharp stellar images for about 75% of the FOV and a VERY wide field of view. The only down side was the fuzzy stars near the edge.

The 82 degree version of the 14 performed much the same as the 18, except that stars were pinpoint to nearly the edge. In fact, I had to make an effort to notice off axis aberrations. For practical purposes this EP was as flat as I could reasonably expect. Again, M81 and M82 were in the same FOV. However, I could see quite a lot of detail in M82 and M81 was showing hints of a spiral structure. The 72 degree version is actually a bit better in overall FOV sharpness. Eye relief is noticeably longer. My personal preference goes to the 82 degree version, however. The extra eye relief makes it a bit harder to position my eye and the FOV is much nicer in the 82. Still, the 72 is an excellent wide field EP for eyeglass wearers.

The 10mm EP – both of them – are very special EPs. FOV is as perfect as my eye could detect. At 0.82 degree TFOV on my newt, it’s still a fairly wide field for larger DSOs. But star images really are perfect to the edge. Plus, it took barlowing VERY nicely. Using my 3X Tele Vue for an effective 3.3mm FL and 300x, it provided the best views of Jupiter and Saturn I have ever seen with my scope. Cloud detail on Jupiter and ring detail on Saturn were awesome. It beat every Plossl I have and showed the same detail as my best Orthoscopic. However, the large FOV and relaxed eye relief made the experience more like being there rather than staring through a pinhole. Optically, I couldn’t tell any difference between the 72 and 82 degree versions. Again, the eye relief on the 72 degree version was noticeably longer. I sold my 72 mm version because the FOV was nearly the same as the 5 – 8 variable set to 8mm. But I found I really missed that EP, so I bought the 82 degree version, and I’m glad I did.

As an aside, the boxes both 10mm EPs came in specifies a 9.8mm FL. I didn’t verify the actual FL, but I suppose that 10mm is just a nice round number, and maybe that’s why it’s referred to as a 10.

The 5 – 8mm variable actually goes down to 4.9mm, according to Antares’ specifications. But for our purposes we’ll call it 5mm. As a planetary EP, it’s a natural. You can start at 8mm (125x on my newt) and adjust the EP for whatever magnification seeing conditions allow. It’s nice not to have to swap EPs. The EP is adjusted by loosening a setscrew in the side, which allows the top part to slide out. The EP is not parfocal. That is, after adjusting the FL, it must be re-focused. However, it’s not that far off and has not proven to be a problem in my F5 newt. The sharpness of the view in the 5 – 8 was comparable to that shown in my ortho. However, the eye relief and extra wide FOV truly changed the experience. And being able to change the FL without swapping EPs is pretty handy. On obscure planetary nebulae this EP really shines. The extra wide FOV makes them much easier to find! For example, NGC 6210 (in Hercules) was very easy and quite evident and the wide FOV made sweeping to find it practical. I’ve never been able to do that in a short FL Plossl or ortho. Lunar observations are especially nice. With high power, using this EP makes you feel like you’re hovering over the moon. It’s quite an experience. I find I use this EP a lot.

Overall observations and impressions. Unlike some EP families, the Speers Walers are not parfocal. When changing EPs sometimes a good amount of re-focusing is necessary. In addition, all of the fixed FL EPs require a good bit more in-focus than most of my other EPs. I’ve been told that on some newts this could be a problem. I use a crayford that was shorter than the stock focuser on the Konus, so this wasn’t a problem for me. It appears the 14 and 18 require the most in-focus travel, followed by the 10. The 5 – 8 variable is more like a conventional EP in that respect, not requiring more in-focus travel than is typical.

I noticed no chromatic aberrations in any EP of the family. Bright stars stayed bright pinpoints and neither the moon nor the planets showed any false color along the edge – well, with the refractor they did – a lot, in fact, at high power. But that’s the scope, not the EP.

WALER stands for Wide Angle Long Eye Relief. I suppose that 12mm would be considered long eye relief, especially at short FLs. But I’m not sure an eyeglass wearer could use them with eyeglasses on. Better try it first, or use the 72 degree version.

Finally, these EPs are BIG! While not all that heavy, they are a LOT larger than plossls. The fixed FL are 5 inches long in the 82 degree variety and 6 inches long for the 72 degree version. The 5 – 8 is even larger. I did have to tighten down a bit on my crayford to keep gravity from sucking them in (or out), although not to any great extent. But they are big. 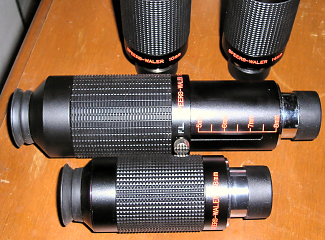 The price. Well, they’re cheap compared to those EPs with the green writing on them. But they cost quite a bit more than a set of Plossls. The fixed FL EPs run anywhere from $110 to $130 USD. The variable goes for about $240. Of course they can be found occasionally used, which is how I got all of mine. The short answer is they’re well worth the price.

So the question some of you might be asking is, are they as good as Naglers? Well, the specs say they’re as good. I’ve had only limited opportunity to look through Naglers, however, and have never been able to compare them on the same scope. I can say that using Naglers on a good Starmaster was a better experience than using the SW on my Konus. But we’re also talking about a 14.5 inch Zambuto optics scope vs well, my 8 inch Konus. Not the same league. I hope to get a chance to try the SW line on a quality scope some time, and maybe someone will lend me a couple of the EPs with the green writing on them. When I find out something I’ll post a follow-up.